We were going to move on today.  I wanted to stay until Monday as it was so hot, but Richard wanted to move on so we compromised and will move on tomorrow.

I had put in an e-consult request with my Doctor’s surgery and I was told that I would either get a phone call or a text yesterday.  Mine was a text which said that the doctors had done a prescription for me which was being sent to Pharmacy2u and then to home.  Not much use!!  I rang the surgery and they said they would send the prescription to Boots in Stratford.  So, today we walked into town to collect my pills.  Guess what?  Boots hadn’t got my prescription!  The pharmacist was very helpful and looked back on the computer but couldn’t find it.  Great!  I will have to phone the surgery again on Monday and ask that they send it to the chemist in Evesham. 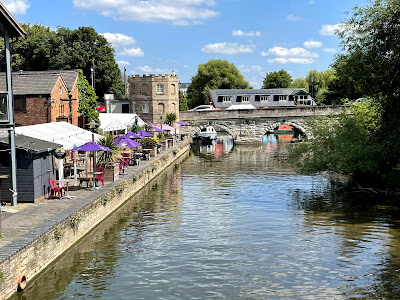 View from the Tramway Bridge

Stratford was a very different place today.  The high street was busy and as we went back across the River on the Tramway Bridge it was slow going with so many people.  As we went back across the park people were setting up camp all over the place.  Someone had painted lots of white circles on the grass and there were sign saying, please keep in your bubble! 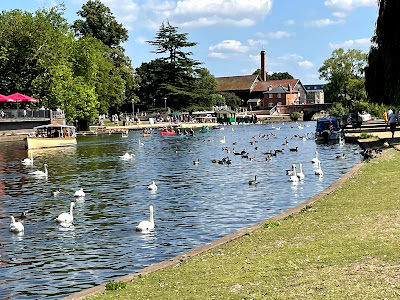 Back at the stiflingly hot boat we sat out under our tree.  The park was so busy with families picnicking and playing games and people just strolling along the footpath.  The moorings soon filled up too and someone actually had the cheek to moor up and spoil our view of the river.

There were so many small hired motor boats and rowing boats, and not forgetting the paddle boards and inflatable kayaks.  It was amusing to watch some people who had no idea how to row!  No one hit the boat, but some weren’t far off.  I put my earphones in to listen to my book, but as I hadn’t slept well, I must have fallen asleep for a good 30 minutes. 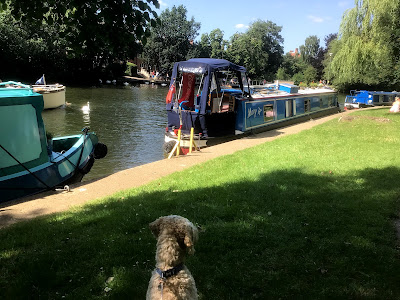 It got up to 35° in the boat today and at 6pm it was still 28.5° sitting out under our tree.  I made a quick dinner as I didn’t want to spend too much time down below. 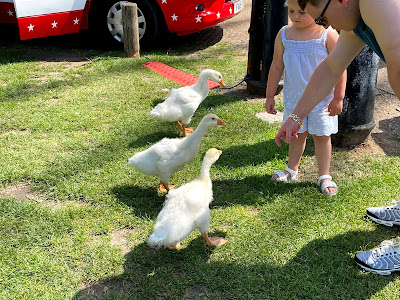 The Tramway Bridge was built in 1826 to carry a horse tramway from the Stratford Wharf to Moreton-in-Marsh. The tramway, which was originally intended to be extended to London, had a branch to Shipston-on-Stour. It was bought by the Oxford, Worcester and Wolverhampton Railway in 1847 and closed, except for the branch line, in 1881.  The tramway was intended to carry Black Country coal to the rural districts of southern Warwickshire and limestone and agricultural produce northwards.  Nowadays it is a pedestrian and cycle bridge.  There is a solid white line down to bridge, supposedly to separate the cyclists from the pedestrians but, in these Covid times, it works really well for 2 way walking!  There are lights all along the bridge which were installed in 2010 at a cost of £138,000 but in 2020, after spending nearly £300,000 on them, they were turned off permanently after a series of costly breakdowns finally forced the district council to admit.  It is now Grade II listed.

Posted by Linda Gifford-Hull at 10:19