We were aiming for Welford Lock as we have stopped there before, but I wasn’t too sure about shade. 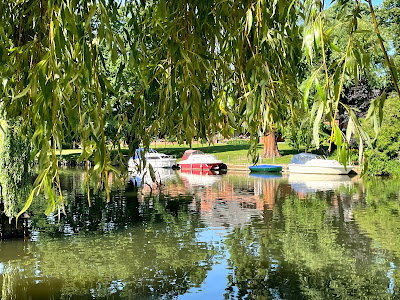 Our first lock was Stratford Trinity or Colin P. Witter.  On the upper Avon all the locks have two names.  There was a small motor cruiser in the lock going our way, but he was about halfway down so too late to join him.  I let Richard do the lock as, when I helped the motor cruiser, one of the bottom gates was too stiff for me alone.

They are building a new 250 berth marina, The Shakespeare Marina, just below Stratford Trinity Lock.  You can see the pontoon posts are in place – I don’t know when they are planning to open it.  They are doing a special earlybird mooring price.  With the 5% discount we, at 60 feet, could moor there for £4691 for the year!!  We pay about half of that! 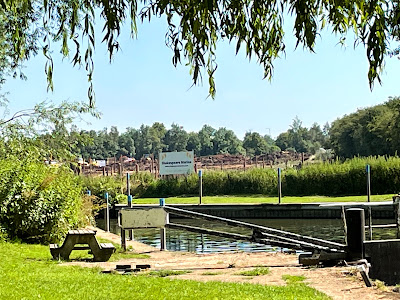 As we approached the second lock, Weir Brake or Gordon Gray, the motor cruiser was waiting for us in a prepared lock 😊  This time it was a top gate that I couldn’t close. (Maybe the heat is getting to me!)

We needed to stop at Luddington Lock to dump the dumpables.  We pulled over on to the lock waiting and found a maintenance team working on the lock.  They said they would be about half an hour.  I asked them if there was any shade at Welford Lock and was told that probably not after about 2pm.  We had passed some moorings just short of the lock, so Richard reversed back and moored up.  As you can see there are some lovely weeping willow trees to sit under, but the boat is in full sun.

We have a caravan which, I have to admit, we don’t use very much.  On one of the caravanning Facebook pages some people were commenting on a small, and I mean small, USB air conditioning unit.  I found one on Amazon for £12.99 (today they are £9.99!) and bought it.  Last night I put it in front of me while I was watching TV and it was really cool.  I must point out that it doesn’t cool a room, but it certainly works when directed on me!!  As I write this the temperature in the boat is 34°but I am as cool as a cucumber!  Richard, who is very strict on the use of his batteries, is quite happy for me use the unit as he says it doesn’t use much juice.  If you are working on your narrowboat and suffering with the heat, I would certainly recommend one. 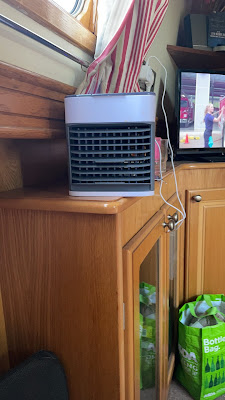 It was such a hot afternoon, but I sat with my AC unit and caught up with some emails.  I could hear shouts, screams and lots of splashes (the shouts and screams were happy ones).  A group of Romanians (so the woman in the boat next to us said) were having a great time jumping into the river and the lock.  There must have been 40 of them – honestly! 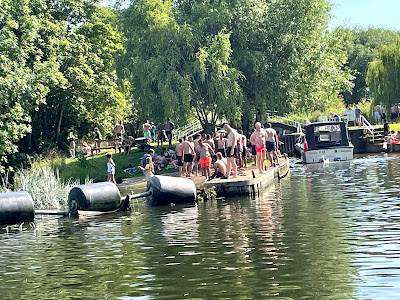 We had a barbecue for dinner.  I had bought some steak from the farm shop on the Ashby back in April and had put it in the freezer.  We both reckoned that it was the best steak we had had for a long time. 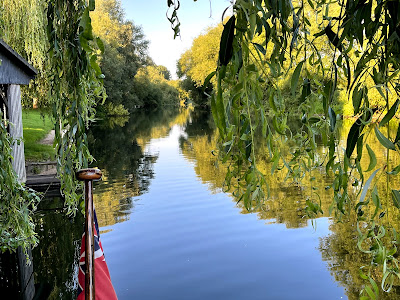 After dinner we walked over to the other side of the lock where there is, what looks like, a manmade waterfall.  It is so pretty.  Suddenly down the river came the back end of the Stratford restaurant boat – don’t worry the front end appeared too!  It moored up and all the diners got out for a break.  Some of the women had high heels on which disappeared into the ground! 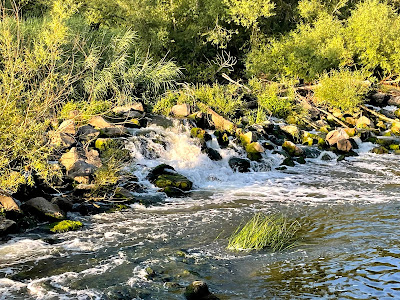 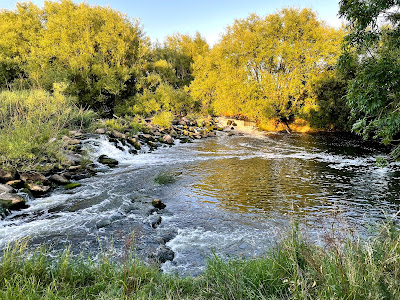 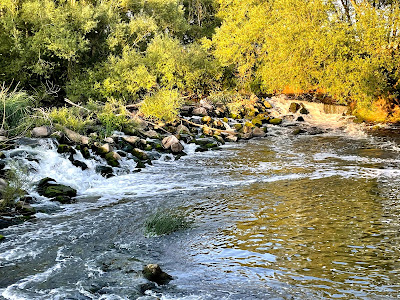