A bright sunny day but windy. 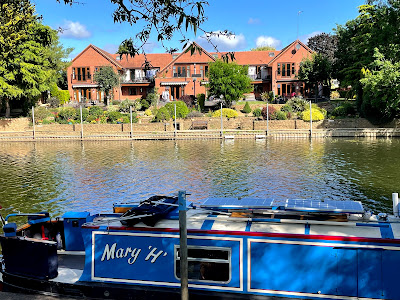 Our goal today was Luddington Lock which meant 4 locks.  In the first lock, Barton, there was a small sailing boat without a mast, but there were already on their way up, so we were just too late.  At the second lock, Bidford Grange, there were just leaving the lock and said that they had waited for us and thought we must have stopped, however they helped us through the lock.  At the third lock it was all set, and they were in and waiting for us.  Luddington Lock wasn’t the best experience.  There was quite a fast stream flowing from the weir which made it difficult for Richard to get into the lock and he certainly couldn’t get alongside the lock landing to get off.  He climbed up the steps of the lock, which I will not do, and went to the bow to get the line to tie up.  Meanwhile the stern drifted into the middle, and I was so conscious of the fact that the plastic sailing boat might get thumped by 60 feet of steel!  It’s quite a vicious lock and the whole thing wasn’t nice ☹  What made it even worse was that there was no room on the moorings. 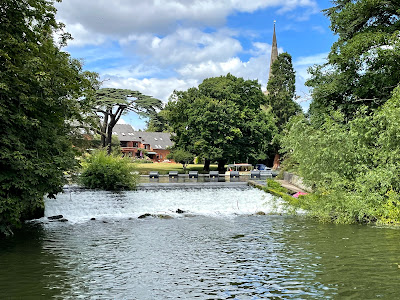 As we couldn’t moor at Luddington we continued up to Stratford.  Our lock buddies had turned round so we were on our own.  Weir Brake was set for us, but Trinity Lock had a boat going up and one waiting to come down.  I saw a rather last log floating just before the lock which I was very mindful of as the last thing I wanted to do was get it stuck on the prop as once happened on the Basingstoke Canal 7 years ago.  One Log Ness Monster is enough! 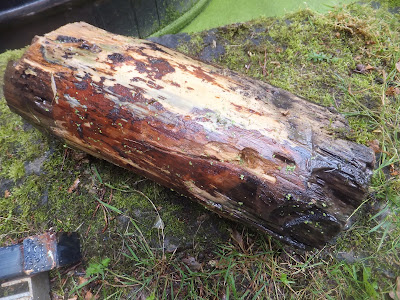 We moored up in the same place as last time.  The park was much busier than it was before but then it is the school holidays and people are having their staycations.

The starboard side of the boat was really filthy and as it was the side looking onto the park Richard decided to wash it.  He felt that he might leave the other side as his walking on water needs more practice!

When we were here last the chain ferry wasn’t operating as it was before the July 19th Covid restrictions were dropped, but it is up and running again now.  Alderman Smallwood had left £1,000 in his will, to help fund a footbridge across the river, but it wasn’t a popular idea.  After seeing a similar chain ferry in Cambridge, it was decided to have a chain ferry to cross the river instead — a bridge was more expensive and would not be ready in time for the Coronation of King George VI and Queen Elizabeth.  The ferry was built by Collins Boatbuilders, with the late George Onions in charge. On 10th May 1937, two days before the Coronation, Stratford’s Mayor, Cllr Ernest Ray piloted the chain ferry across the river on its maiden voyage, from the Recreation Ground to Waterside.  It was the last of its kind to be built in Britain. By 2006, the ferry was carrying 100,000 people a year, and it was proposed that it be moved to make way for a new bridge. However, in 2010, the ferry vessel resumed service at its original location after an overhaul and restoration work, undertaken by the local boating firm, Avon Boating Ltd. 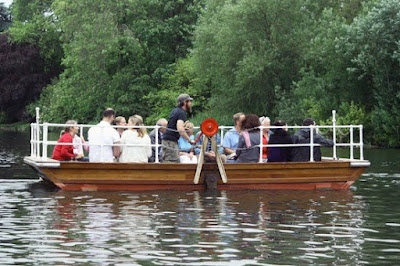