I mentioned on Sunday about Cleeve Lock and said that there wasn’t and hadn’t been one, but I may have been wrong.  As we were coming up the river, I was checking our location on Waterway Routes, and saw that there had once been a lock which was next to a Cleeve House.  I mentioned it to Richard, and he said that there was an old brick wall coming up, and lo and behold there was – so was that some of the foundations of the old Cleeve Lock? 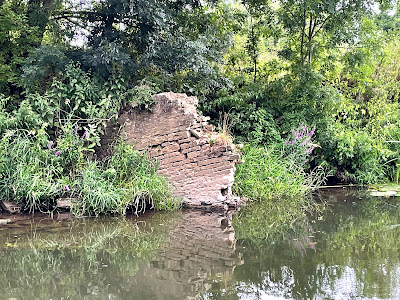 I reckon Marlcliff lock is probably the deepest lock on the river.  I can’t find any information on lock depths but, as Richard said, it depends on the height of the river! 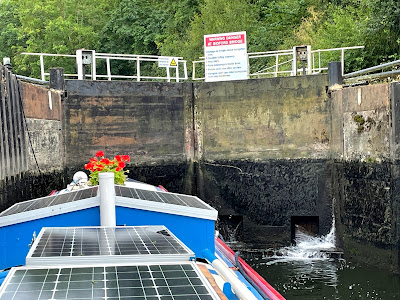 It wasn’t far to Bidford and there was just one space left, though our bow was held by a pin.  It was a fairly wet afternoon with one thunderstorm.  We didn’t see any lightening and the thunder wasn’t that close, but Muffin was still petrified.  He hates bangs of any sort and thunder is his nemesis.  He normally hides under the table if he hears a bird scarer but as this went on and on Richard kept him on his knee, but Muffin was seriously shaking.  I have heard about thunder shirts for dogs which apparently applies constant pressure to calm all types of anxiety, fear, and over-excitement issues.  We don’t have one, but we wrapped him up in a towel and Richard reckoned it was better than without it.  Maybe I will get Muffin one. 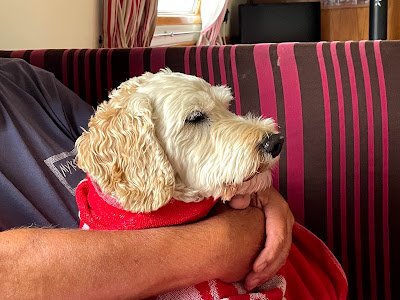 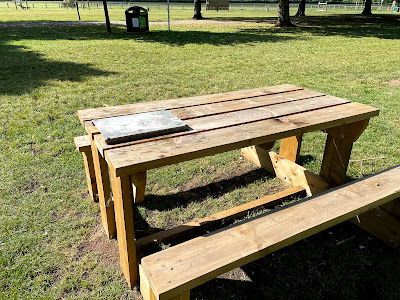 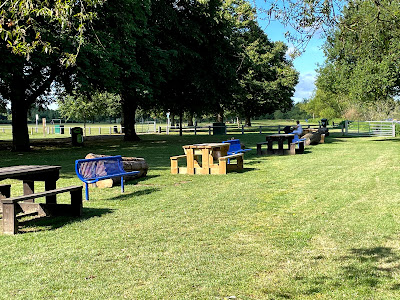 Yesterday we were at Harvington Lock or Robert Aickman Lock.  I got so excited about the Battle of Evesham that I didn’t get round to giving you some of the history of the lock, which in my mind, is probably the most interesting lock on the river (but then I am biased!).

The original stone lock was circular so that the walls resisted ground pressure and was built on the site of where the dry dock is today.  In 1963 the lock was rebuilt on this site, but the site suffered badly from silting was abandoned in 1981.  It was rebuilt on a different alignment.  In 1982 the Robert Aickman Lock (Harvington Lock) was opened.  The 'bridge' over the chamber is to prop the walls.  There were ladders to the bridge but were pretty non-compliant so removed.

The lock was named after Robert Aickman who led the battle for many years to save the inland waterways from public indifference and hostile official attitudes. Robert Aickman was an author and literary agent and was also a Chairman of UANT (Upper Avon Navigation Trust) and joint founder (with Tom Rolt) of the Inland Waterways Association (IWA).  A plaque to Robert can be seen next to the lock. 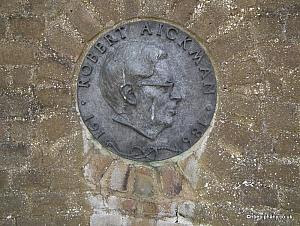 When the South Stratford Canal was re-opened on the July 11th 1964 in the presence of the Queen Mother. It was, he said, “a pivotal moment – conclusively demonstrating that volunteer-led restoration was a viable model for the recovery of the waterways.”  At that 1964 event Aickman told the Queen Mother that he now intended to start working on the restoration of the Upper Avon Navigation, which was still in a state of dereliction. The Queen Mother vowed that, if he did, she would be pleased to formally reopen it. Ten years later, on 1st June 1974, she met her promise, and the reopening ceremony was held at the Upper Avon’s new top lock.  Here is a video of Queen Mother on the occasion.