Its lovely being in Bancroft Basin though it can be noisy, and you quite often get Japanese people getting on the boat to have their photo taken!  However, this year Stratford is well and truly dead ☹  The only language you hear is English.  The pavements are quiet and, to be honest, it is lovely, but I do feel for the shops and tourist industry people.  This is their second year without tourists, and it must be dreadful for them.  They can now open so don’t qualify for any grants but with no, or few, customers their income must be severely cut.  It will be interesting in coming years to see how many of them are still in business.

Though the town must be feeling the pinch it is a blaze of colour.  There are troughs and hanging baskets down the high street (my photo didn’t make the grade) and the roundabout over the canal is a real picture.  I looked up to see if they had won any “in bloom” prizes but I couldn’t find anything, but I did find an organisation called Stratford In Bloom.  They encourage local businesses, schools and front gardens to make things as colourful as possible.  This year the plan is for everything to be pink.  Maybe whoever planted the high street and roundabout didn’t get that email!  I wish I had taken more photos down the other streets.  I’ll try and do when we come back. 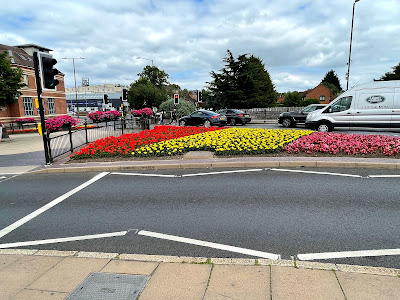 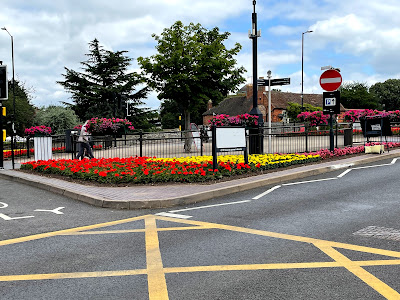 We had ordered a few things from Amazon so went up to the Amazon Lockers and picked them up.  We haven’t had any TV for a week and one of the packages was a new aerial.  Don’t worry we haven’t been sitting twiddling our fingers, we have been streaming through our Amazon Fire Stick.

Next to do some shopping which has to last us until we get to Evesham.  We eat a lot of fruit and I doubt very much if that, or the salad, will hold out.

It was getting hot and stuffy in the Basin, so we decided to go down onto the Riverside which we really love.  There is a wide beam trip boat which goes out every hour, so any departure has to be planned around its departure and arrival back.  As it moors right opposite where we were Richard decided to follow it down as he needed to space to get round as the boat next to us was 70 foot.  I went to do the lock and the young man from the trip company very kindly helped.

There were interlopers in our favourite spot who were pooing everywhere ☹  No not people – swans and geese!  We went further down, and, in fact found somewhere nicer.  It’s much quieter here and Muffin has been enjoying the empty park – 3 games of ball were played during the afternoon.

Posted by Linda Gifford-Hull at 10:41