This morning really was beautiful.  I am really enjoying the South Stratford though the banks are very overgrown.

As we went through Wootton Wawen Basin the canal goes over the second of the three aqueducts, the Wootton Wawen.  Wikipedia says

Wootton Wawen Aqueduct is one of three aqueducts on a 6 km length of the Stratford-upon-Avon Canal in Warwickshire. All are unusual in that the towpaths are at the level of the canal bottom.  The canal crosses the A3400 main road. It was built by the Stratford Canal Company in 1813 and is a Grade II* listed structure. 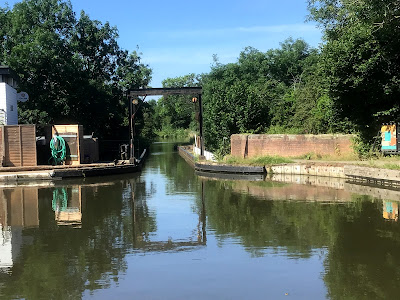 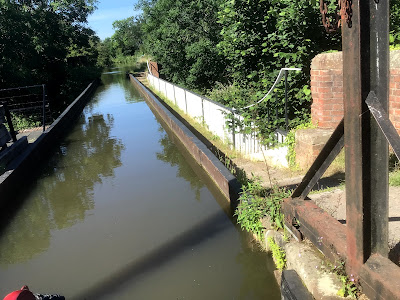 Edstone Aqueduct is the last of the three and I got off and walked to take some photos.  Good old Wikipedia says

At 475 feet, Edstone is the longest cast iron aqueduct in England.  It crosses a minor road, the Birmingham and North Warwickshire railway and the trackbed of the former Alcester Railway. There was once a pipe from the side of the canal that enabled locomotives to draw water to fill their tanks.  The aqueduct is a Grade II* listed structure. 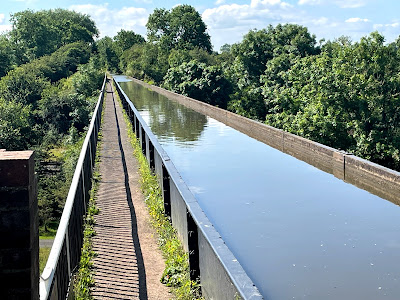 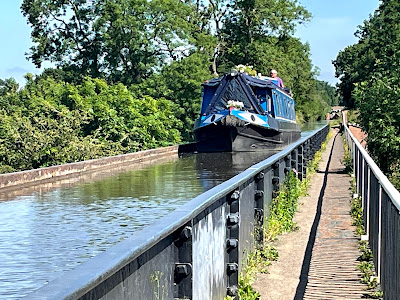 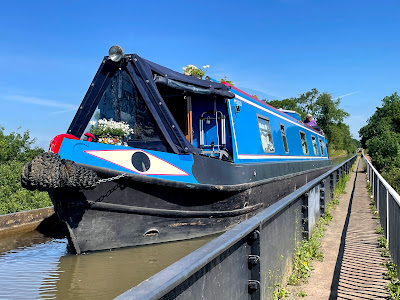 As we approached the Wilmcote top lock there was a boat moored on the lock landing which had broken down.  The poor skipper couldn’t get hold of RCR as he had no phone signal.  I had 3 bars so did the right thing and lent him mine!  We even used What Three Words so that they could find him!  I hope it worked.

There were some very stiff paddles on the flight and my Go windlass with it’s ratchet really came into its own, even with that Richard had to start one off.

We found 3 volockies on the flight who helped us, mind you two of them were at the same lock.  At one lock where there was a volockie we noticed a crew turning the lock below us (their boat wasn’t even in sight).  The volockie was furious and went down to give them a telling off - the Wilmcote flight is notorious for having water shortage problems.  They were a first time hire boat crew who said they hadn’t seen us – didn’t look more like it!  They didn’t know about the turning a lock “etiquette” and apologised.  The volockie said that one his team had almost come to fisticuffs with an owner over turning a lock.  The chap said that he had been boating for 35 years and that he knew best and anyway “you can’t tell me what to do”!  He has been reported to CRT along with a video taken by a passer-by!

We had planned to moor up for the day at the bottom of the flight but in the end decided to carry on down to Bancroft Basin.  It mean another 5 locks - I had just about had it by that stage as it was really hot, so Richard took over the locks – he would have had to do the last three anyway as they are not the easiest. 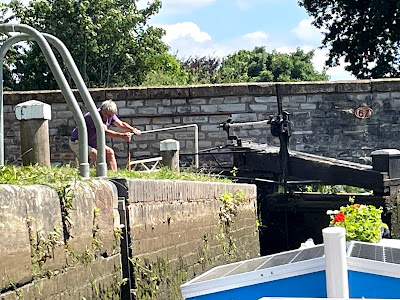 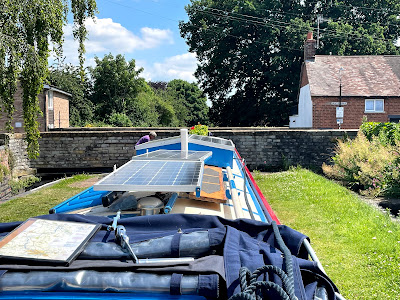 We got down to the Basin where it was about half full.  Richard likes to be stern to in the Basin and had to do some pretty interesting manoeuvres to get in.

We had an extremely late lunch and then walked round to get an ice-cream.  I don’t think I had ever realised how expensive ice-creams are now but there was a sign outside saying £3 and £3.50 if you had a flake!

Dinner was a pizza from the Barge and Quarterdeck.  The pizza was lovely but they don’t provide boxes, just paper which, I guess is fine if you are eating it there and then but Richard had a problem bringing them back and most of my topping was stuck to the underside of Richard’s paper!  Mental note – take plates or two people next time!

This is the view from the stern. 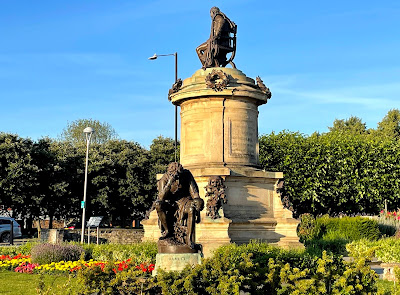