A rather manic morning as I was having my hair cut and I hadn’t packed a thing!  Most things were out but not actually in suitcases.

We left home on time and arrived at the port and into the disabled car park (courtesy of Jim).  We collected Jim’s mobility scooter and headed to the departure hall.  All checked in we headed up the ramps into Silhouette.  It is our second time on Silhouette, and we have also been on her sister ship, Eclipse.  Last time we were on this ship she was a bit tired, but she had a 42 day refit last year and she certainly looks better for it. 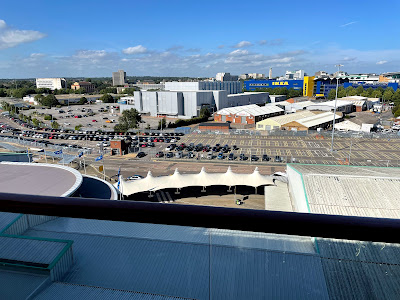 Our cabins, or state rooms as Celebrity like to call them, are pretty much the same as last time and are on the port side.  This was the suggestion of the travel agent as we are going anti-clockwise round the UK so we will always be able to see the land if we are in close enough!  Our cabins are next to each other and are on Deck 10 midships.

We had booked a speciality dinner as it was on special offer.  The Italian restaurant, Tuscan, is across the stern of the ship and we had a lovely view of Southampton Water as we left.  This was followed by a Baileys – a cruise tradition now! 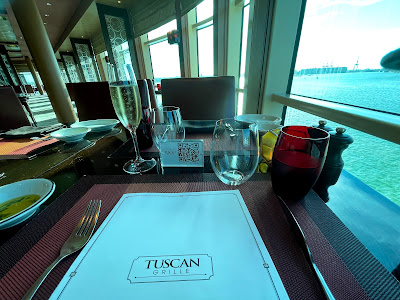 Our first sea day.  We have three sea days and three days ashore in Invergordon, Belfast and Portland.

It was a quiet day which we all needed, and I think we all had a sleep in the afternoon. 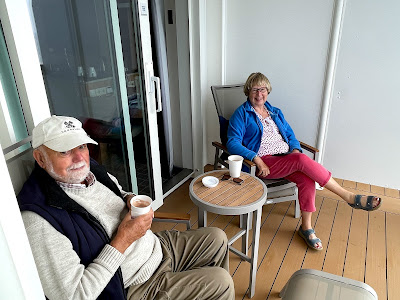 We passed a huge wind offshore wind farm which I am pretty sure was the Hornsea Wind Farm.  Construction began in 2018 with phase one being completed in January 2021.  It has a capacity of 1,218 MW, making it the largest in the world on its completion. Sited in the North Sea 75 miles off the coast, the eventual wind farm group is planned to have a total capacity of up to 6 gigawatts. 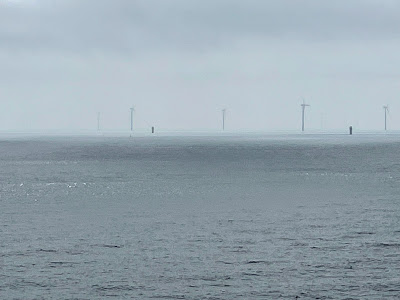 Dinner was in the main dining room.  Richard and I had beef which was so tender you could have eaten it without any teeth in!!  This is pudding not steak! 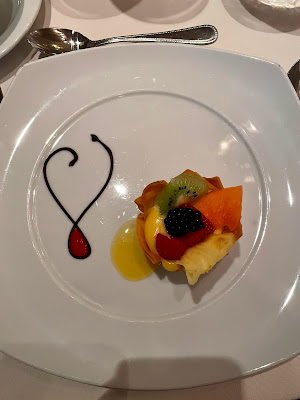 The entertainment in the main theatre were the Barricade Boys who we saw before, in 2018, on Silhouette.  They were brilliant then and were just as good this time.

We managed to find somewhere to sit down for our regular Baileys.

As far as Covid goes onboard all passengers and crew have to be double vaccinated.  Passengers had to have a negative PCR before boarding and crew are tested regularly.  Masks have to be worn in all inside public areas.  We were made aware of all this before we set sail.

We woke up and opened the curtains as the ship approached Invergordon which is in the Cromarty Firth.  We passed a huge oil rig in the harbour with about 6 men all waving at us!  We watched the ship dock then went for some breakfast before heading ashore.  The gangplank was very steep, but Jim managed to do the steps while one of the crew carried his folding scooter down. 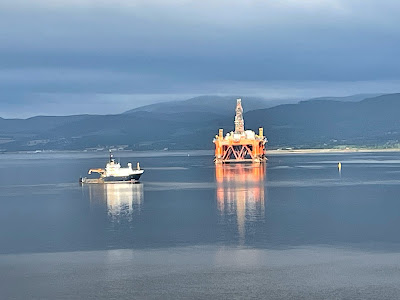 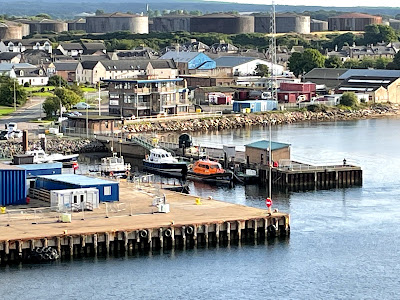 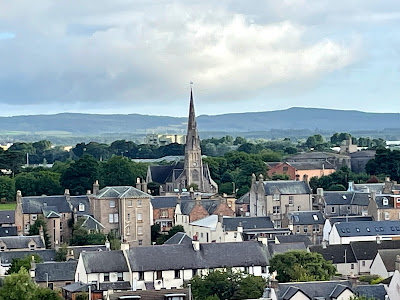 We all had to have special masks on to go for about 100 yards from the ship to get out of a designated area set by the Port Authority.  After that it was just mask wearing in shops and enclosed areas.  The masks, KN95, are about £1+ to buy and Celebrity had to provide everyone getting off the ship with one of these. 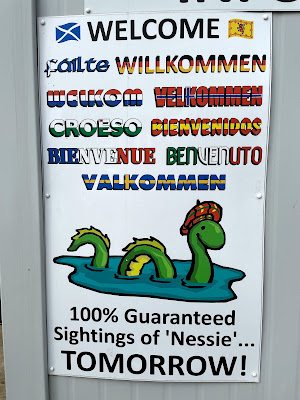 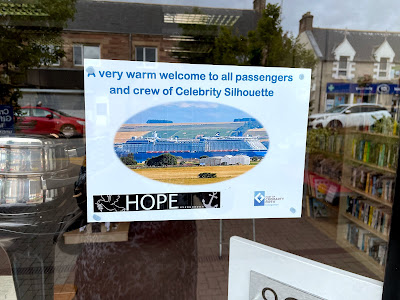 Invergordon is a rather sad town with not much going for it.  There was a Boots and a Co-op and that was about it.  However, there is a mural trail consisting of 17 murals, which, apparently, is a major tourist draw.  In January 2002, a small group of dedicated volunteers who called themselves “Invergordon off the wall” got together to address the social and economic deprivation of the town. One of the projects taken up by this group was creation of an outdoor art gallery where the history and culture of the area is depicted through the murals.  We only found six. 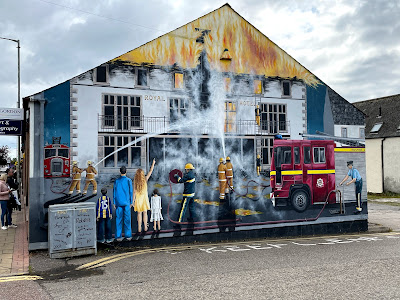 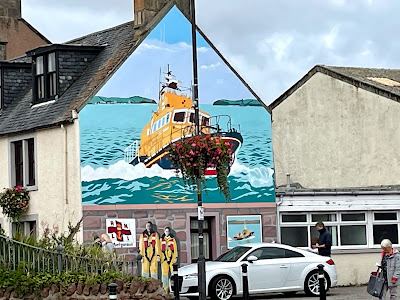 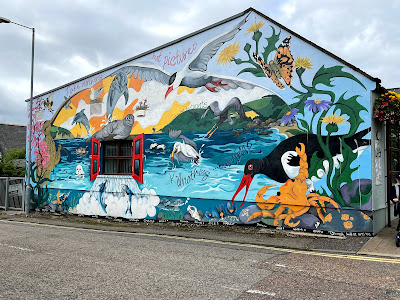 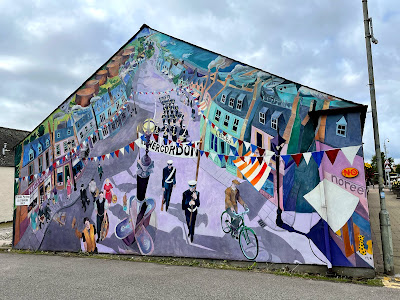 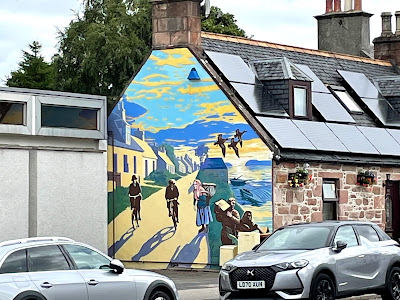 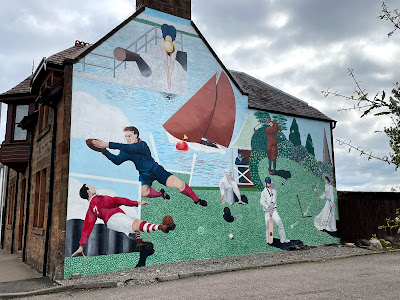 Over the years, the people of Invergordon have seen various industries come and perish. There was an aluminium smelter here but the costs of transmitting the electricity needed to smelt bauxite imported by sea from Jamaica made the operation uneconomic, and it was closed down in 1981. It still has a grain whisky distillery constructed in 1961, in an effort to bring new industry into the area following the closure of the naval dockyard.

Less than fifty years ago, however, Invergordon was more than a tourist town. It was once a strategic base for the Royal Navy with what has often been called the best natural harbour in Europe. During both World Wars the harbour and oil storage tanks were of great value to the Royal Navy. The naval base was closed in 1956, but the proximity of Invergordon to the North Sea oilfields allowed the area of the docks to remain productive by fabricating and repairing oil rigs. 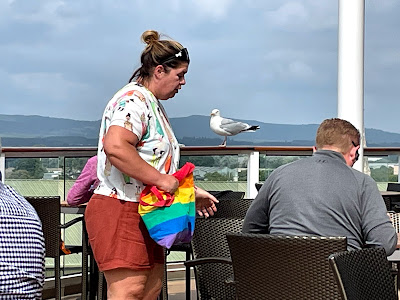 Back on board it was a late lunch then and a quiet afternoon until the sound of bagpipes stirred everyone into action!  A group of 7 pipers and 1 drummer played for half an hour and should have seen us off at 5pm but nothing happened – we didn’t move.  Eventually about 6pm the Captain came on the tannoy to say that we would be leaving about 9pm.  The reason being that some of the crew had tested positive for Covid last week and had been in isolation.  However, it was decided that they would be put ashore to continue their isolation.  One has to ask how, if all passengers and crew have to be double jabbed, some of the crew had tested positive and I guess weren’t really well enough to stay on board.

Dinner was in the main dining room.  We then came back to our cabins to watch the leaving of the Cromarty Firth.  We passed a vast wind farm harbour with some gigantic uprights and some massive blades and a couple of very different ships for carrying said uprights and blades. 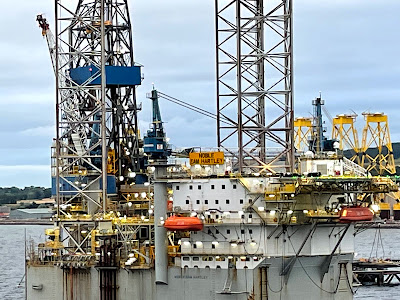 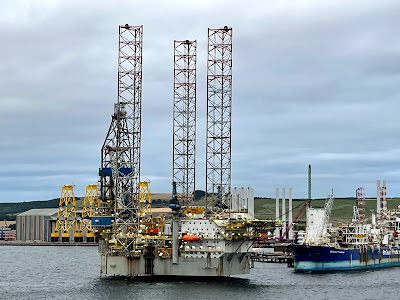 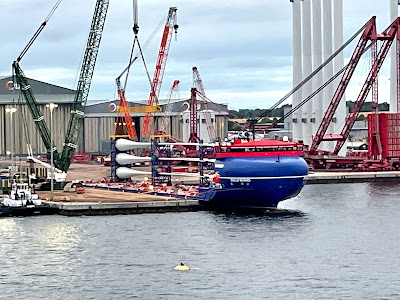 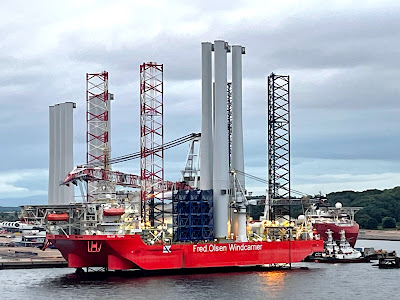 We were being stalked by the Pilot’s launch and waited to see it pull up to take the Pilot on board, but the rotter got off towards to stern, so we missed it! 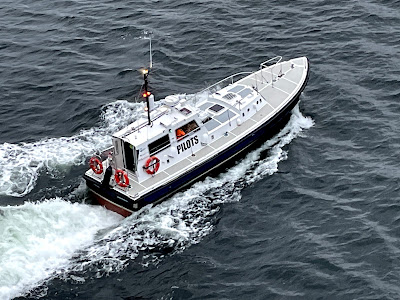 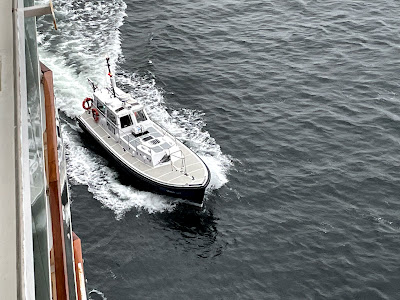 Richard and I went to get the Baileys which we took next door.

Posted by Linda Gifford-Hull at 18:20