The alarm was set for 7am as Richard had organised lock buddies for us and they said that they would be ready to leave between 8am and 8.30am.  We were ready at 8am and they were ready at 8.30am!!  A boat had gone down about an hour earlier so all the locks were empty.  Our lock buddies were the crew of hire boat Patricia Helen which consisted of Father, Mother, two daughters, Granny and Grandad, oh and Daisy the Springer Spaniel.  We started off with a very good routine.  Two people on the lock with the boat while two went ahead to set the next lock.  We were doing really well, Richard timed one lock and it took us 6 minutes, until we met two lots of two narrowboats coming up.  It got worse as we caught up with the boat that had left an hour before us, it was a single hander.  We followed him for two locks and then he very kindly let us go before him.  Then it was C&RT who were cleaning weed off lock gates and sides and kept us waiting for ages. That put us so behind and dashed our chances for the world record of going down Hatton Flight!  However, we still did the flight in 2 hours and 47 minutes.

I decided that cuttings have their benefits – well one benefit as it gave me a photo opportunity of amazing tree roots clinging to the bank. 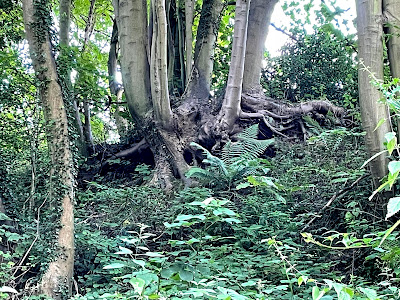 We arrived in the Saltisford Arm about 11.30am.  We moored up and checked in.  We always get such a friendly reception here.  When we told them the boat name, the chap remembered us 😊  We have electricity here too – wahey, what can I plug in?

I wasn’t sure we would get the bottom gates open with this amount of water coming over the tops gates. 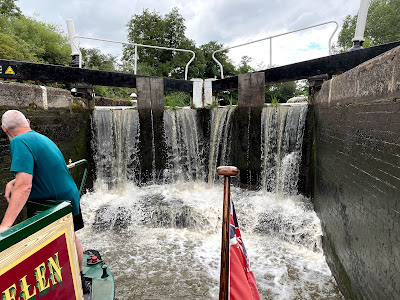 We were pretty shattered this afternoon, and both had a snooze, or should I say all three of us.  Muffin hasn’t been on his best form today.  He was sick during the night and has definitely been one degree under today and wasn’t in his usual “lock keeper” mode on the flight.

The Hatton flight was opened in December 1799 on the Warwick and Birmingham Canal. In 1929, the canal was renamed as the Grand Union Canal (on unification of a number of operators) and the decision was made to widen the Hatton stretch. In order to accommodate traders with heavy cargos of coal, sugar, tea and spices up the flight, the locks were widened to 14 feet  – allowing navigation by industrial boats or two single narrowboats. The widening was completed in the mid-1930s using a workforce of 1,000, and the revolutionary concrete lock system was opened by Prince George, Duke of Kent. 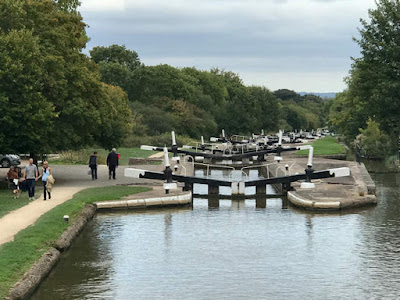 The flight was known as the "stairway to heaven" due to the difficulty of the flight and the subsequent easier journey to Camp Hill where the workmen would receive their wages.

Posted by Linda Gifford-Hull at 11:21