We have a day off cruising today as we are expecting visitors this evening.  My daughter, Victoria, and her fiancé, James, are joining us to help us through the last 25 locks of our trip.  We only have two days so they will be long, and probably wet 6+ hour ones. 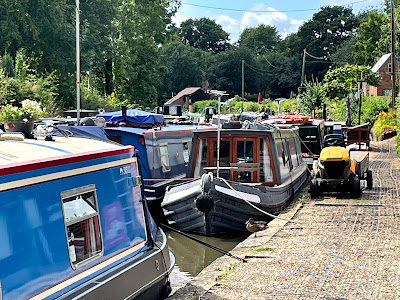 I was able to use my hair drier today 😊  It’s funny how little things like that can be so exciting!

We were expecting a Sainsbury’s delivery between 11am and midday.  He arrived at 11.30am. 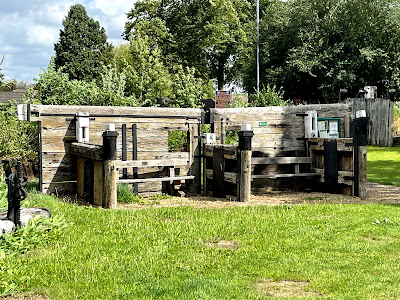 Then it was the house (boat) work.  Bedding to organise, bathroom to clean, hoovering, de-cobwebbing and a few more other chores as well.

Jo and Keith from Hadar, who are resident in the Arm, came in for a cuppa.  We haven’t seen Jo for a few years, but it is 7 years since we saw Keith last.  He had been very ill then, and I hardly recognised him today – a picture of health 😊  It was lovely to catch up with them again. 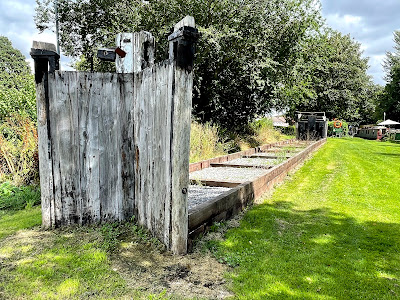 Victoria and James are two of Muffin’s special people.  This little video is of when we told him they were coming!

Until 34 years ago the historic Saltisford Arm of the Grand Union Canal – which once served basins near what is now Sainsbury’s supermarket – lay derelict, unloved and in danger of being filled in for development.  In 1982 a group of volunteer canal enthusiasts took on the task of saving the Arm – sadly some has been built on –and painstakingly restored it.  They set up the Saltisford Canal Trust – a registered charity – and its trading company subsidiary, Saltisford Canal Trading Ltd, which manages the site. The Trust has succeeded in its initial aim of saving and restoring the arm to navigation and to promote the use of the canal in Warwick.  It now owns the moorings which help provide some of the funds to enable the Trust’s activities. 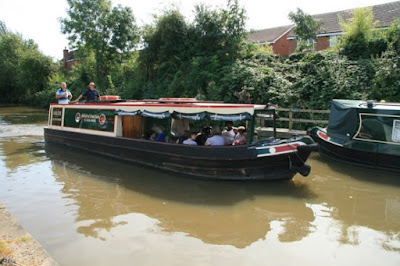 Photo taken from the Saltisford Canals website
The Saltisford Trust also own a day boat, Saltie, which has disabled access.  Saltie II was built locally in Warwickshire and is designed to enable everyone to get afloat regardless of mobility.  The 35 foot long boat is wider than a narrowboat at 9 feet, making it very stable and is extremely manoeuvrable.  You can find out more about hiring Saltie here.
Posted by Linda Gifford-Hull at 11:11