After lunch we drove to Turre to go to Super Turre, a great local supermarket.  Penny wanted shower gel and all she could find in Mercadona was a huge bottle – she managed to get what she wanted.

From Turre we went back to the Playa and stopped at the Parque Commercial for a cup of tea and a piece of cake – just what we all needed on a miserable day.

I really wanted to show everyone this wonderful photo that Laura took one morning while she was here.  I put it on the Facebook Mojacar Forum, and it got over 400 likes! 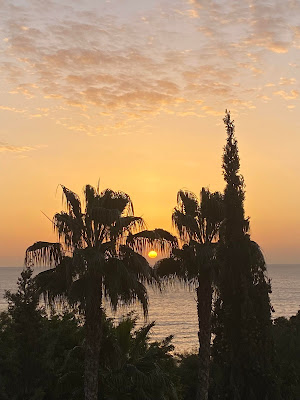 Thank goodness the sun has started shining again - it makes such a difference when it does.

We decided to go up to the reservoir at Cuevas del Almanzora for a picnic.  You leave Almanzora and drive along beside a dry river bed which has roads crossing it and football goal posts set out in the bottom!  Suddenly the dam looms with its huge Indalo man painted on it. 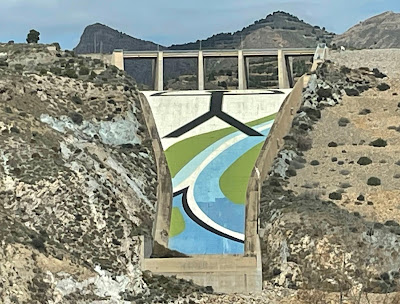 I followed the road up on Google Maps, but we came to a No Entry sign however we just went through it and up to the top of the dam where there is a car park – there was something written beneath the No Entry sign which might had said only no entry for certain people and as I didn’t see the words “no Inglés” we went through!  In fact, while we were up a few vehicles which looked like work ones passed us and didn’t say anything.  There was already a car in the car park so we didn’t feel too bad (we later discovered that it was a hire car belonging to an English couple!)

The view from the top is amazing. 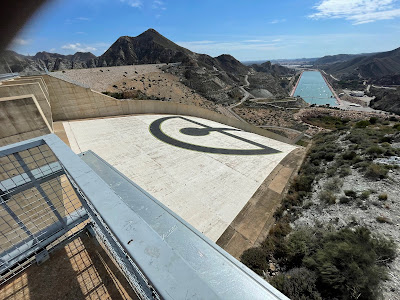 Below the dam is a man-made lake which, I guess, was originally the overflow from the reservoir.  Now it is used as a lake for 5-tower cable system which allows for the practice of a range of water sports, including wakeboarding, water-skiing and kneeboarding. 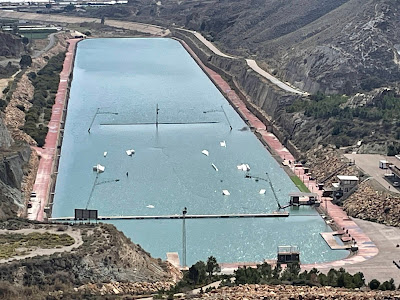 I looked everywhere online for some information on the dam and this is all I could find. The Cuevas de Almanzora Dam was built in 1986 on the Almanzora riverbed.

The water level in the reservoir is very low. 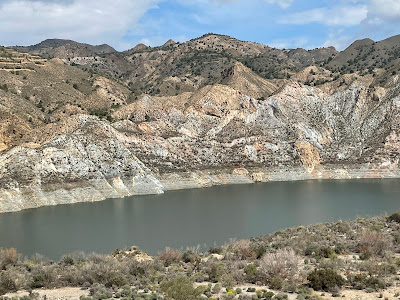 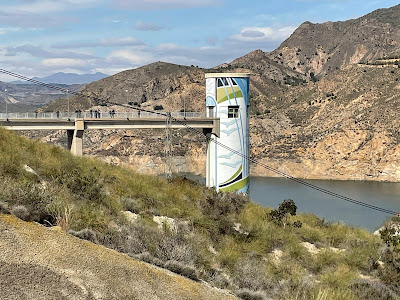 We had our picnic in the car park, but it was such a lovely spot. 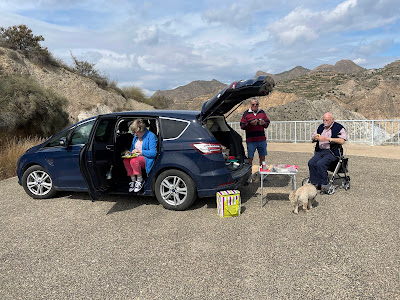 I took this photo from the car of one of the roads crossing the dry river bed. 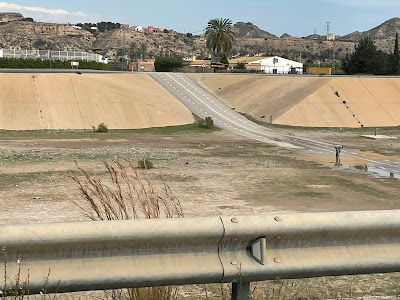 From Cuevas del Almanzora we drove to Palamores, which is noted for a fatal accident in 1966 in which a B-52 bomber crashed after a midair collision with a KC-135 plane, causing radioactive contamination after its payload of four H-bombs was dispersed and crashed. The high-explosive igniters in two of these bombs detonated on impact, spreading radioactive material, including deadly plutonium-239, over a wide area of the Spanish countryside, but safety mechanisms and electronics prevented nuclear explosions. The third H-bomb landed via parachute into a stream, where it was relatively intact and was recovered. The fourth H-bomb landed in the Mediterranean Sea, and U.S. Navy searchers took three months to find and recover the device intact. A large amount of contaminated Spanish soil was soon removed, packed up, and shipped across the Atlantic for burial near Barnwell, South Carolina, the site of a large installation of the U.S. Atomic Energy Commission.

Annual monitoring by American and Spanish researchers has found no evidence of health problems, or of any contaminated food or water resulting from these crashes. Nevertheless, some areas remain contaminated, and they cannot be disturbed. Although they are fenced off for safety, the result is that the region is emotionally blighted, and it has missed out on tourist developments like those in most other coastal towns. On 19 October 2015, Spain and the United States signed a statement of intent to discuss further cleanup of this area. Eventually, the United States agreed to remove additional contaminated soil from Palomares to a safe burial site in the United States.

We drove to the beach which is huge and looks lovely though it had become a bit cloudy by that stage.  You can see Mojacar Pueblo in the distance in this photo, under the clouds. 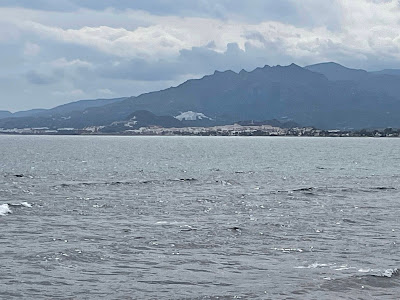 Back to the villa where we had a BBQ though, once again, we had to sit inside.

A lovely sunny day, but not a good start for Penny as she slipped over in the bath whilst having a shower.  I was upstairs and heard a terrific bang and shouts.  I knocked on the door and there she was sitting in the bath.  She was so shocked and her back hurt.  Slowly we got up her up and dosed her up with paracetamol and Ibuprofen.  As the day wore on, she became very stiff and sore and didn’t really want to do very much, however we got her out and down to the ice cream parlour which made her feel a lot better!

Penny’s fall was such a shame as today was such a lovely day and we had planned to go to Caboneras for lunch.  Hopefully she will feel better tomorrow.

The ice cream parlour, Gelateria Alberto, says on its website that it is “a place that feeds creativity, an antioxidant site of the mind that provides satisfaction to the senses . Our art exhibition is a permanent tribute to ice-cream and its innovations. Since 1988 we have been dedicated to the dialogue between the traditional and the experimental. Our mission is to help you understand and enjoy our exquisitely elaborated art day by day.”  The hyperlink on the name takes you to the menu, which is quite extensive and does some amazing sundaes, especially for children. 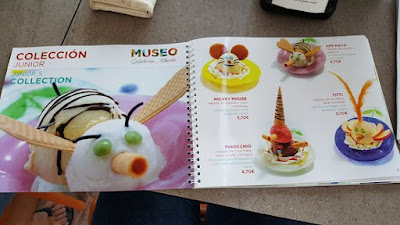 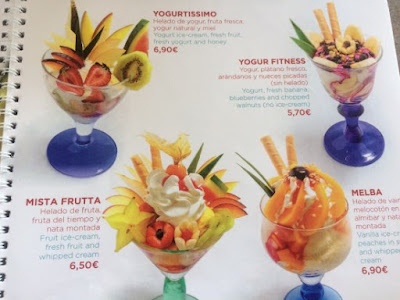 Posted by Linda Gifford-Hull at 15:28