We woke up to the most miserable day.  It kept drizzling on and off.  We took a trip to the mobility shop as I had booked Jim a mobility scooter for their stay.

Penny and I went to the supermarket in the afternoon and that was it for the day, other than to turn the sign round!  For many years I have said that when it’s just the two of us on the boat “its just a way of life” and not a holiday, so I had a sign made.  We use the same ethos here in Spain. 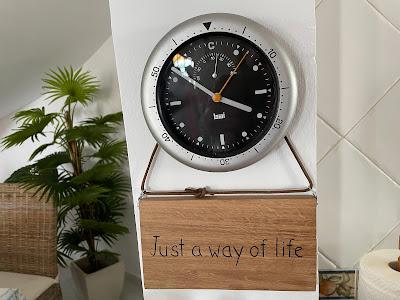 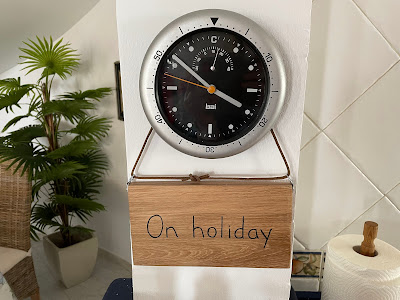 It had been such a dismal day and a real shame for Penny and Jim.  They had been looking forward to seeing some sun but there wasn’t any today.  In fact, it was nicer at home than in Mojacar but a darn sight warmer here!

We had strawberries and ice-cream for pudding! 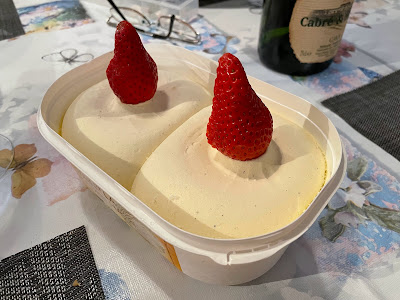 Some friends of Penny and Jim were staying at Alfaix, 90 minutes drive away.  Veronica and Julian drove over, and we had lunch at La Cabaña down on the Paseo.  It has always been a favourite of ours and we weren’t disappointed 😊

After lunch we decided to walk to the end of the Paseo by the Best Indalo Hotel so that Jim could try out his scooter.  He whizzed off and we were a bit worried that he would end up in Caboneras before knew where we were!  He managed it very well though it seemed to give up the ghost as we neared the car.  The battery light was still on green, but something was wrong.  We will have to go back to the shop on Monday. 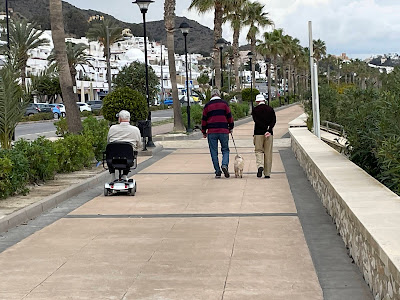 Veronica and Julian came back with us for a cup of tea before heading back to Alfaix. 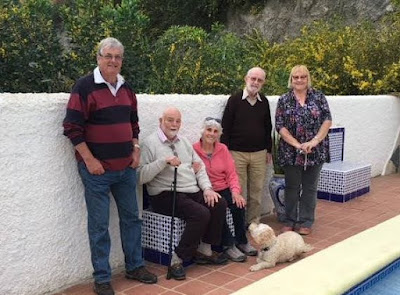 During the evening Veronica phoned to say that they had encountered horrendous rain on their way back to Alfaix and Penny had just said to her that we hadn’t got any rain here when there was a terrific flash of lightening and huge clap of thunder right over the villa and we were plunged into darkness until Richard managed to uptrip the lights.

We woke up to a nice morning and actually had breakfast on terrace.  There is a bowl which lives on the table on the terrace and, well, you can see how much water was in there after the rain last night! 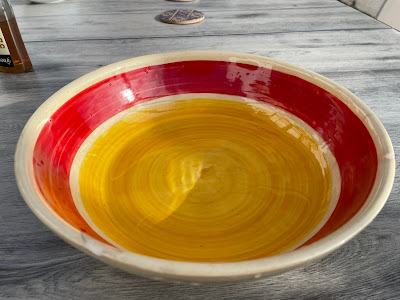 By midday the sun had gone, and we were left with another grey day.

We went to Badgers for Sunday lunch.  It was a very good meal again.

Back at the villa we all slumped and/or slept.  I’m so glad we went out for lunch as we wouldn’t have done anything all day if we hadn’t.  This weather has got to get better, I feel so bad for Penny and Jim as they have hardly seen the sun in three days ☹  To think that when Robert and Laura were here they were swimming every day, now we wouldn’t dream of it!

Posted by Linda Gifford-Hull at 10:10