Another dry start to the day but no sun though it was still warmish.  Hopefully the washing will dry.

On our way out this morning we saw this snail, I have never seen one this shape before. 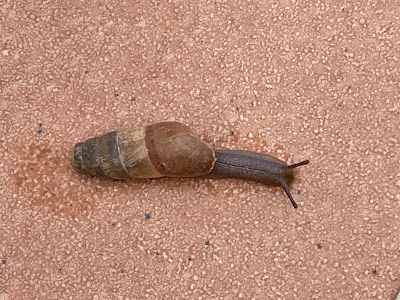 Muffin had to go to the vet for his injection.  The numbers for his Addison’s Disease are coming down nicely and if they stay down then he won’t need another blood test for 4 to 6 months and will just have an injection every 28 days.  I have to say that the service and care that we have received from Clinivet in Turre has been exceptional.  The vet, Ellen, is a lovely lady and has treated Muffin so well.  He gets a treat after each needle entry!  Poor dog its either been blood out or injection in.

A quick trip to the supermarket to get bits and pieces to take back to England, followed by our last visit to the ice-cream parlour.  Once again, I forgot to take a photo of my sundae ☹

We needed to walk off the ice-cream so took Muffin onto the beach.  You can see from this photo how the flood stream has cut into the sand. 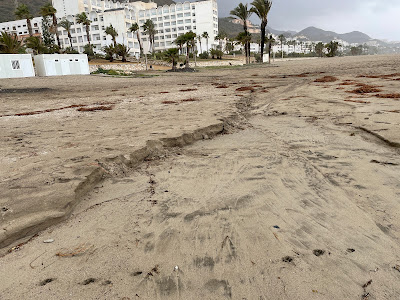 Back at the villa Richard started to do some red mud clearing.  This water feature was empty when Tobyn and Bobby were here – look at it now.  I can’t believe how much rain has fallen. 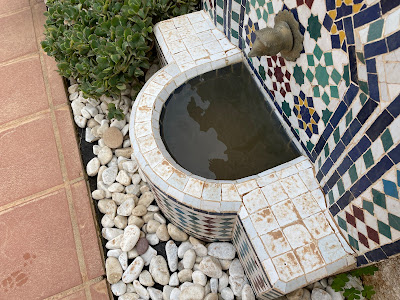 The sun finally came out at 6pm!
Tuesday 29th March
I reckon I got about 4 hours sleep last night – not good.

We had chores to do today so off we set.  First stop was the launderette as I needed to get all the towels from Penny and Jim’s visit dried.  I had already washed them so that was one thing less to do.  Next was the pet shop for more food for Muffin as if we hadn’t, he would have run out before we reached home!  We have had rather a smashing time and managed to break one wine glass, two tumblers and three pudding dishes!  I wanted to replace them so popped into Lopez to see what I could get.  Nothing was similar but at least they are replaced now.

Then the sorting out had to be started.  I don’t mind the packing but I hate the sorting as stuff seems to spread everywhere around the house.

As the sun had come out and it was quite warm we rounded off the afternoon with a nice walk on the beach. 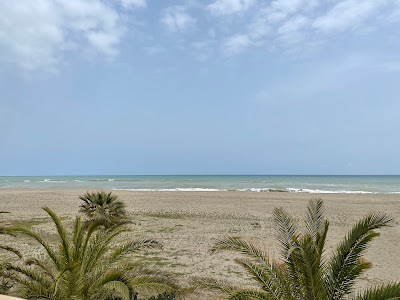 A nice morning, not much sun but quite warm.  It wasn’t really a case of us leaving as the weather was turning colder and it is going to get cold again on Monday.

I started on some packing, but we had to stop about 11.45am as we were going to Macenas to see Liz and Phil’s new flat that they have just moved into.  It’s a lovely three bedroom flat with a nice balcony. They have been living in Macenas in a rented villa for about 3 years and like the community feel of it.  It’s a strange complex as about 5 or 6 years ago the company building went bust with an 8m water bill!  Some houses were finished, and others just left.  There was a golf course but that has all grown over now.  Rumour has it that it has finally been sold so maybe it will get finished soon. 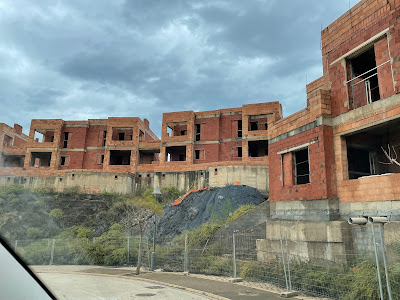 We went back to the Paseo to go to La Cabana for lunch, with Liz and Phil (or Phiz and Lil!).  We had a lovely lunch but then all too soon it was time to say goodbye and see you next year.

Back at the villa there was more packing to do until I got to the stage where I couldn’t do anymore until the morning.

We binged watched 3 episodes of Killing Eve – a good way of watching it.

Posted by Linda Gifford-Hull at 10:17