Monday 16th May – Charleston Lake Provincial Park to Emily Provincial Park
We left Charleston Lake to head over to Emily, a township north of the town of Peterborough.  I will never moan about the roads in the UK again!  You should try some of the Canadian roads 😟
I had read about a very good farm shop which was north west of Charleston Lake and as we didn’t want to drive the main highway again we decided to make a visit – just our luck, it was closed on Mondays!
The landscape is littered with grain silos, and I mean that in the nicest possible way!  Some are quite simple and others more complicated. 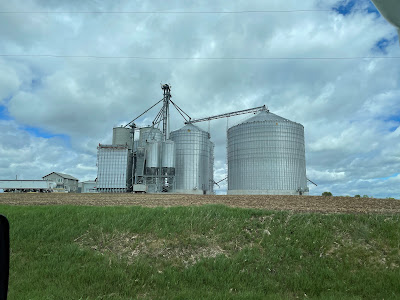 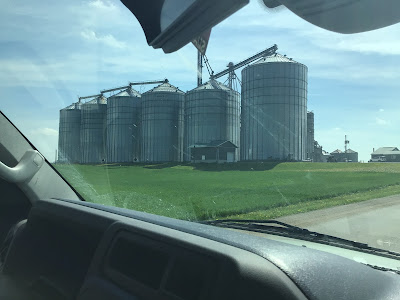 One of the things we have noticed is that there are no lay-bys or, in fact, anywhere to stop off and have a coffee let alone lunch.  We to survive on crisps and diet coke during the journey.
It started to rain as we got nearer to Emily Provincial Park and when we got there it was obvious that they had had a lot of rain. For nearly all our pitches on this part of our trip, I had chosen ones near to the water.  This turned out not to be a good idea!  We went to our pitch and it was muddy and our electric cable wasn’t long enough to reach the electric post.  We decided to give up on it and went back to the office and moved to one just up the road from the original one.  It wasn’t muddy and our electric cable reached but we were on a real slope.  Richard went to have a look round and found a warden who suggested a couple of sites, one of which was good.  The warden told Richard never to go for a walk without a site map as there was a man last year who walked around for 2 hours trying to find his pitch!
The township of Emily has some interesting history.  The first settler was Humphrey Finlay who arrived in 1820. In 1821, 400 Irish from Fermanagh settled in South Emily and Cavan, and in 1825, 700 of Robinson’s Irish immigrants settled in the northern part of the township. The village of Omemee had its beginnings in 1825 when William Cottingham erected a mill on Pigeon Creek. Before being renamed Omemee (Pigeon) in 1857, it was known successively as Emily, Williamstown and Metcalfe. Emily Township is named after Emily Charlotte, daughter of Lord George Lennox and sister of the fourth Duke of Richmond, Governor-General of Canada from 1817 to 1819.


Tuesday 17th May – Emily Provincial Park to McRae Provincial Park
As we were getting ready to leave we noticed paw prints on the bonnet! They weren’t very big but the bonnet is high off the ground!  Richard was/is convinced that it was a bear, but I think it was more likely a raccoon.  I think we would have felt a bear on the bonnet! 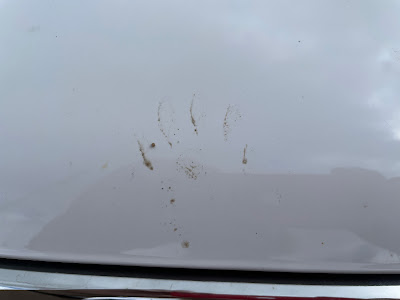 Before we left the site we did a load of washing and drying – we need to keep on top of it for when there aren’t any facilities.
I had learnt a lesson in Boston from Sandy who had a “magic phone”!  She would ask her phone where something was and the phone found it – magic!!  Of course it wasn’t magic, it was Siri (or whoever) but I had never used it.  So having learnt our lesson yesterday with nowhere to stop I asked the phone to find a car park near us and she said that there was one a few kilometres off the road ahead.  I set Google maps to take us there and what did we find?  A lay-by!!  We sat out on a picnic table and ate our lunch overlooking a rather stagnant looking pond!
We have often found railway lines going across a fairly main road with just some warning lights, however this time there was a train coming!  Two locos were pulling a freight train of double height shipping containers.  I kid you not the train must have been at least 2 miles long!  It went on for ever and being so long it was very slow.  We just couldn’t believe our eyes. 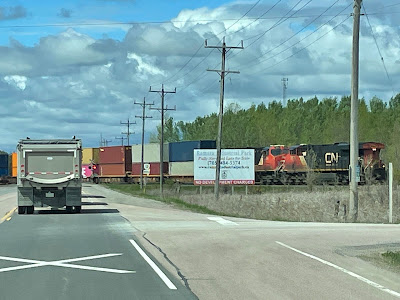 We needed shopping and it was then that we realised that we hadn’t passed any food shops in about 90 kilometres.  There were plenty of houses but nowhere to buy food other than a convenience store at a service station.  We did pass a Foodland store, but I hadn’t read very good reviews on the chain so again I asked Siri, and she took us passed our destination and round in a circle back to the Foodland store!  The store was lovely, clean, well stocked with good produce.  We shall be going to a Foodland again.
At McRae Provincial Park we checked in and found our pitch which was, thank goodness, a nice one.
Richard and his RV. 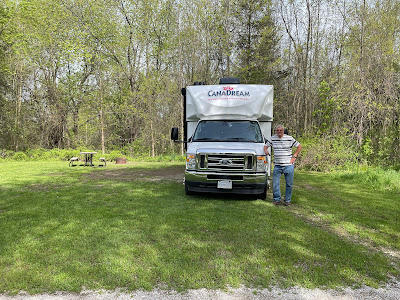 Posted by Linda Gifford-Hull at 22:45