One of the reasons of going to McRae was to go and see Big Chute.  The Big Chute Marine Railway is "one of a kind." Its unique engineering design carries pleasure craft of all types quickly and efficiently over the land barrier at Big Chute. 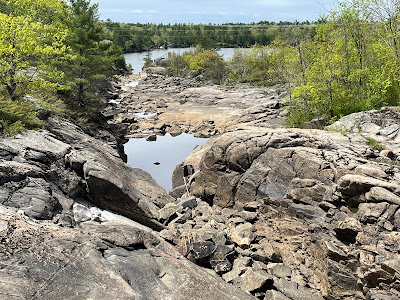 In 1914 contracts were awarded to build locks to connect the Severn River to Georgian Bay with one of the locks being Number 44. Wartime shortages stalled the start of construction, but the first marine railway was built in 1917 and then replaced in 1923. The current marine railway was opened to the public in 1978 and has been instrumental in halting the spread of sea lamprey to inland lakes. 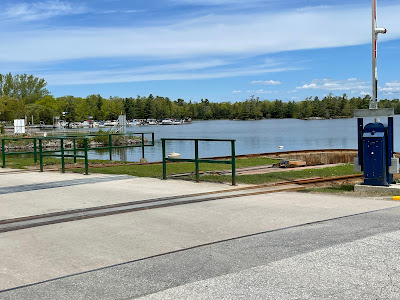 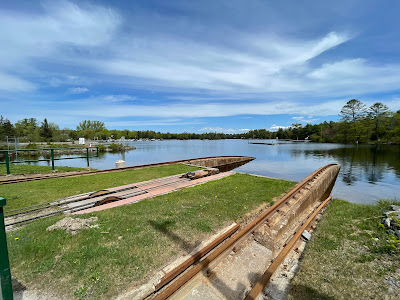 Boats are supported on the carriage by a system of nylon slings. At loading time, the operator adjusts the slings beneath the boats using hydraulic controls on the carriage. Single, double, or triple sling arrangements may be used, depending on the dimensions and hull shape of the boats to be carried. 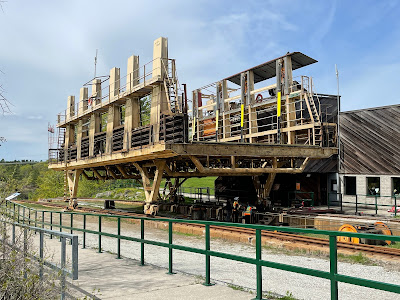 The specially-designed railway carriage is lowered into the water on a submerged track. The boat is then floated onto the deck of the car and cradled by slings. The carriage is slowly raised out of the water, and the boat "settles" into the slings
The carriage is hoisted up the slope by wire ropes attached to winches inside the Visitor Centre. It stays almost level due to a unique double track, which allows the front legs of the carriage to follow one set of tracks and the back legs another. 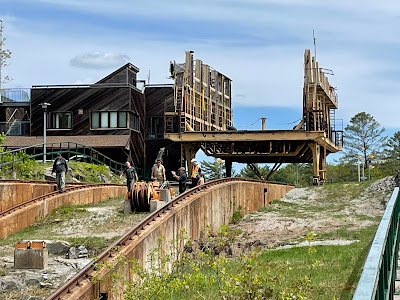 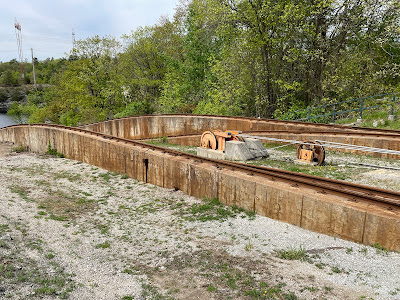 Once past the summit, the carriage is lowered into the water by wire ropes. The boat is then floated off the slings.
We were both fascinated by it and Richard especially so.
From Big Chute we drove to Gavenhurst.  But first we needed to find a lunch spot.  Again I asked Siri and she said that there was one a few kilometres off the main road.  We went down an unpaved road, right then left and lo and behold there were some picnic tables down by a lake.  The parking didn’t look much like a car park though.  A lady came out of her house and I thought we were in trouble, but she was only going to her truck!  I asked her if it was OK to park there and she said that she didn’t really know but other people did!  We made our lunch and carried it down to Lake Muskoka.  It was a lovely spot. 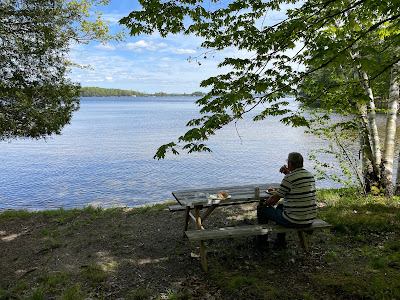 We came across signs saying that we were driving through Mohawk territory.  I’ve watched the Westerns and kept a look out with my rifle on my knee!
I have never seen so many places advertising themselves as smoke shops.  This is what Wikipedia says. “A smoke shop, is a retailer of tobacco products in various forms and the related accoutrements, such as pipes, lighters, matches, pipe cleaners, and pipe tampers. More specialised retailers might sell ashtrays, humidification devices, hygrometers, humidors, cigar cutters, and more. Books and magazines, especially ones related to tobacco are commonly offered. Items irrelevant to tobacco such as puzzles, games, figurines, hip flasks, walking sticks, and confectionery are sometimes sold.”  I had visions of Red Indians sitting outside their tepees vaping!
We stopped at Muskoka Wharf just before Gravenhurst.  It was really lovely.  Sadly the trip boats aren’t running yet. 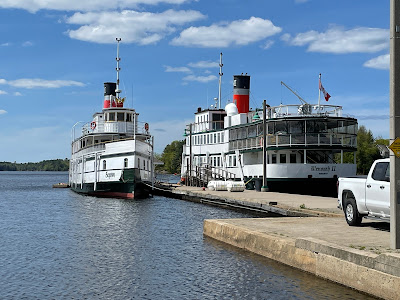 Our drive back to McRae was a nice easy one and once there Richard lit the fire pit and we had a barbecue.
Thursday 19th May – McRae Provincial Park to Inverhuron Provincial Park
Today we were driving from McRae to Inverhuron Provincial Park on the banks of Lake Huron, a drive of 140 miles.  All roads, on our journey, went from south to north or east to west, nothing goes diagonally and definitely there are no bends!  We kept driving west for miles, then we would turn right for a few miles before turning left again.
I asked Siri to find us a lunch spot and she came up with Eugenia Falls, however they wanted $10 to park, a bit much for a lunch stop.  It would have been nice to see them as they are 30 metres high, but we didn’t really have time.
I saw a sign which said that Eugenia was home to the Gold Rush.  The area was surveyed and opened to settlement in the 1850s. Both the local river and the valley into which the river plunged were named after the plentiful beaver in the area. The hamlet of Eugenia was named after Princess Eugénie, the wife of Napoleon IIl.  In 1852, prospectors were also attracted to the area by rumours of gold, but after a fair-sized gold rush, it was discovered that the "gold" was only pyrite, or fool's gold.
Siri then took us to Hobbs Falls which had a free car park.  We ate our lunch then I walked to the stream which babbled its way over stones.  Again we didn’t have time to visit the falls.  The falls are names after William Hogg who built a sawmill upstream of the falls.  Both Eugenia and Hobbs Falls are part of the Niagara Escarpment. 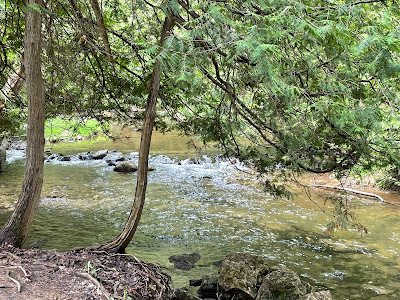 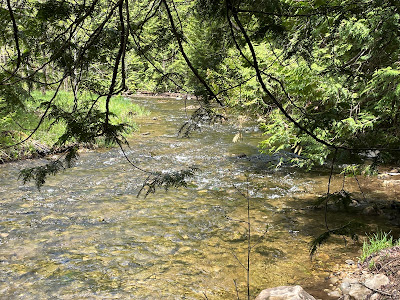 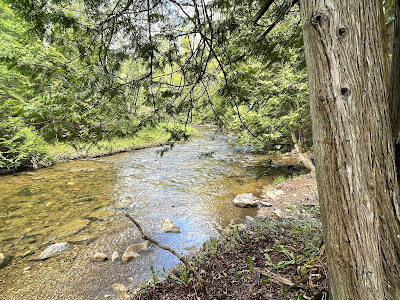 We arrived at Inverhuron Provincial Park just after 4pm, checked in and went to find our pitch.  Once again the electricity cable in the RV wasn’t long enough to reach the electricity post.  We went back to the office to see if we could hire or borrow one.  The young guy in the office said that they had stopped lending out cables due to Covid but Ontario Parks was bringing it back in again.  However, as we were renting an RV, we could borrow one but it had to be a secret!  He put one in a bag and told us not to tell anyone!!
I’ve done a little of the RV as I was being ask for one.  If you are interested then follow this link. https://youtu.be/q9lwP_Z4B3A

Posted by Linda Gifford-Hull at 16:07