Friday 3rd June - Jasper
I got pushed out of bed this morning.  We were on a slight slope and Richard ended up diagonally across the bed pushing my legs out.  Note to self, make sure the RV is level when we park up for the night!
We were supposed to be having a quiet day, but it didn’t work out that way.  We had to move from Wabasso campground to Whistlers (that’s not Whistler in British Columbia) campground and needed to do some washing, it hadn’t been done for 8 days, get some shopping and visit the liquor store.  I found a coin-op on Google so we headed there.  There was a RV park just slightly out of town so we parked up and carried the washing into town.  We found the laundrette, it was enormous with about 30 machines and the same in driers.  We put the washing in and went and had a cup of coffee, going back to put it into the drier 38 minutes later.  We then walked back to the RV as I had suggested driving it into town and parking on the Main Street.  However, Richard wasn’t too keen on that idea so we walked back into town, shoved another dollar into the drier and went to the supermarket next door.  Back to the laundrette with a rucksack and two bags of shopping.  I folded T-shirts and things and tried to put them neatly into our laundry bag.  Richard carried them flat with the rucksack in his back and I carried the two bags of shopping.  Back at the RV we dumped the washing and shopping and walked back to the liquor store. 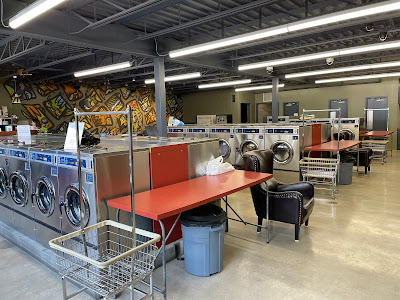 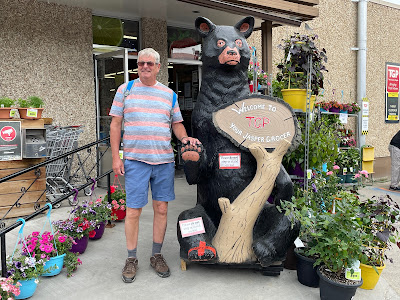 After lunch we set off for Whistler’s Campground.  As we went to check in at the Campground we saw this. 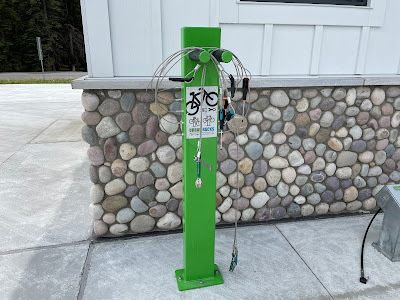 When we found our pitch we collapsed!  I needed to catch up on blogging which I did until I was interrupted by three Elk.  I sat very still as they walked passed our pitch.  These looked like last year’s babies, but I wasn’t going to aggravate them! 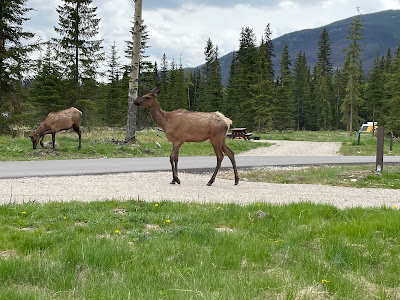 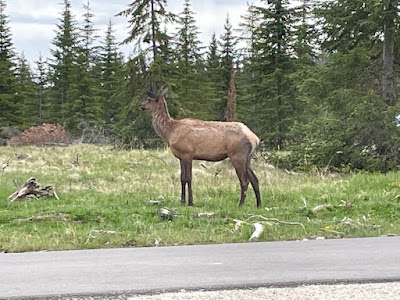 I was surprised to find that Jasper is smaller than Banff as I thought that Jasper was a popular skiing resort and would have had a bigger footfall.
As from Monday we have no pitches booked so we looked at the map and chose a site at the entrance to the Wells Gray Provincial Park.  It will be our first night without electricity.

Bears. Who said bears!!!
We had a boat trip booked on Lake Maligne, A glacial lake, about an hour away.  We set off along another straight road which was gradually going up hill.  Suddenly we saw three cars pulled over on the right.  We had been told that if we saw that it was probably a bear jam!  It was!!  There beside the road was a beautiful, shiny black bear.  It looked as if he had crossed the road to go to the river to drink.  I was surprised as I thought black bears were smaller than this one, but I was wrong.  I am learning so much this holiday!  I reckoned that our bear, Barnaby, was the designated bear that day to entertain the tourists! 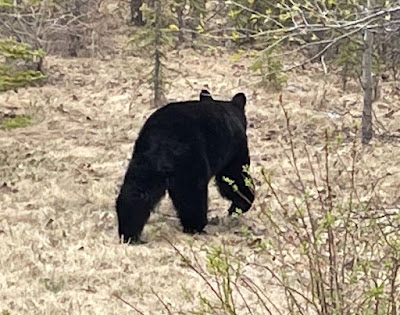 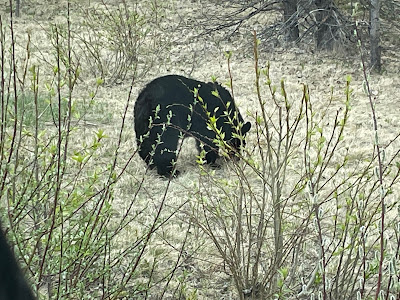 The black bear is the smallest, yet most common, of the three bear species found in America (after the polar bear and grizzly bear). It's still pretty big though. Black bear weight varies enormously depending on age, sex and time of year - black bears can be 30% heavier in autumn than they are in spring.  As a result, adult black bears can weigh anywhere from 45-250kg. According to one study in California, adult female black bears weighed an average of 58kg, while males weighed 86kg on average.  Black bears are incredibly strong, able to casually flip boulders weighing over 140kg with a single paw.
The first lake we came to was Medicine Lake.  Not the most attractive but is interesting geologically.  It has an unique underground drainage system responsible for a variance in water levels each year.  Some years, this lake may almost disappear. 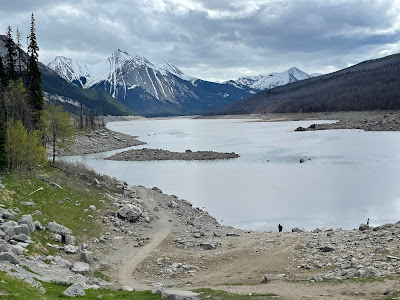 We continued on to Maligne Lake, had lunch then set off to find our boat only to be told that due to the lake not thawing quite as quickly as it should have done by now, the trip boat wasn’t running.  We had noticed that the lake was still a bit frozen but rather assumed the boat would go round the edge.  We were both pretty annoyed especially as I had been notified by Pursuit, the company we had booked through, a few weeks ago that the lake wasn’t opening on May 26th and would be opening on June 3rd.  I had rung Pursuit and booked our trip time only last week, so why hadn’t I been notified this time about the closure?  I will ring them on Monday and complain.  The day wasn’t all doom and gloom as the lake and scenery is magnificent and we saw a BEAR! 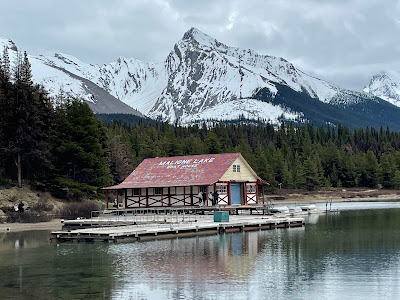 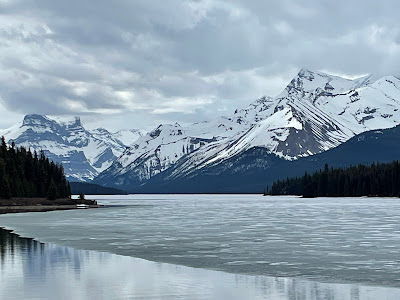 Lake Maligne is often voted among one of the most beautiful lakes in the Canadian Rockies.  The word Maligne comes from a French word meaning wicked or evil!  It was named by a Catholic priest in the 19th century who make several explorations of the Rockies region and it may well have been named for the turbulent and treacherous river flowing from the lake.
We stopped and had a cup of tea at a very pretty place. 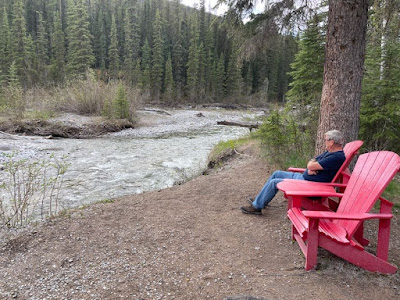 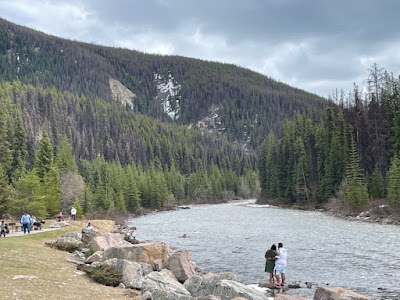 As we were approaching our pitch we saw this pretty elk - well I think her bum is pretty! 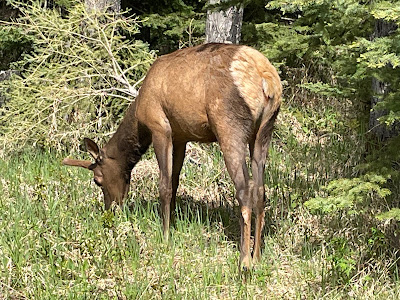 Back at the site we chilled out and thought about Barnaby Bear!
It is very sad in Alberta as the pine trees are being attached by the Mountain Pine Beetle.  We couldn’t work it out at first as some trees looked as it they had been burnt while the ones next to them were quite healthy.  We were chatting to a man at the site who told us it was the Pine Beetle.  Some areas have been devastated and it looks dreadful as I think you will see from the photo. 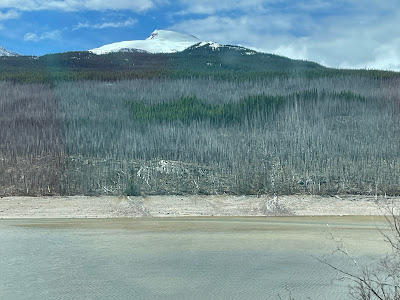 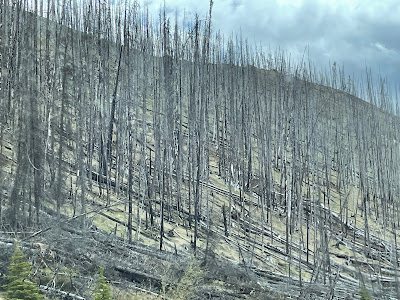 Mountain pine beetles (MPBs) are attacking the province's pine trees. Left unmanaged, MPB could devastate Alberta's pine forests and spread eastward across Canada's boreal region.  Alberta has seen the number of pine beetle infestations grow since the early 2000s. Mountain pine beetles are advancing across Alberta and finding footholds in forests so quickly they don't have time to genetically differentiate, according to a study from the University of Alberta's biological sciences department.  Pine bark beetles attack and kill pine trees, and are relatively common pests of pine forests. The feeding and tunnelling activities of adult and larval pine bark beetles eventually girdles an infested tree (e.g., disrupts the transport of water and nutrients up and down the stem) and quickly kills it.
Here are a few interesting facts about the Pine Beetle.
• The beetle has a one-year lifespan in most of its range.
• Lifespan may be shorter or longer depending on local temperatures.
• Adult beetles colonize new host trees in July or August.
• Female beetles release chemicals called aggregation pheromones, which communicate with other beetles to go to that tree.
• Female beetles eat tunnels (“galleries”) into the inner bark of the tree to lay eggs.
• Newly hatched larvae eat further into the tree.
• Larvae usually spend the winter in the tree and complete their development the following spring; pupating in June or July
Posted by Linda Gifford-Hull at 16:49