Sunday 5th June – Mount Robson
We were leaving Jasper today but hadn’t seen the steam engine or the totem pole.
Jasper’s Locomotive 6015 is one of 16 mountain-type engines built by the Canadian Locomotive Company of Kingston, Ontario in 1923 and used by Canadian National in fast freight and passenger service. It pulled the Canadian version of the Orient Express, a passenger train with exquisite wood-panelled cars and fine antique furnishings. This type of engine chugged through the natural beauty of Alberta at 100 miles per hour around the rugged Canadian Rockies. It needed about 10,000 gallons of water and 17 tons of coal. By the late 1950s, the steam engines were replaced by diesel locomotives. The Locomotive 6015 stands today as the mark of a time long gone by but never forgotten. 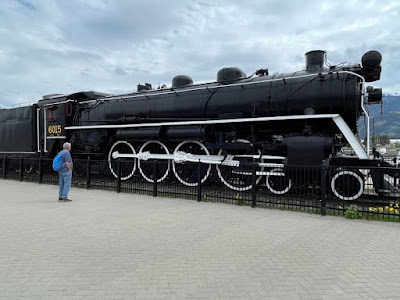 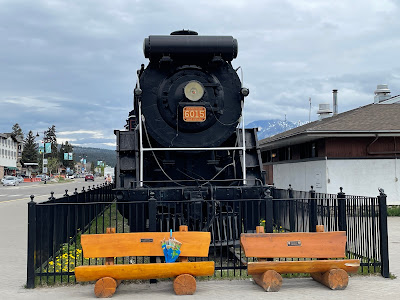 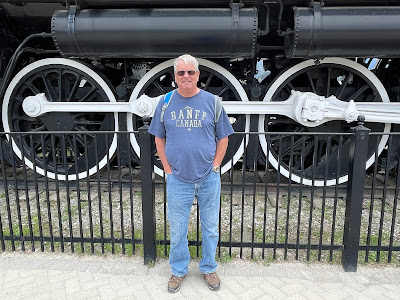 The totem pole is approximately 45 feet tall and is painted in traditional Haida colours of red, black and blue.  On Saturday, July 16th, 2011 as part of Parks Day and Parks Canada Centennial Celebrations, Jasper National Park along with many Indigenous and non-Indigenous partners pulled together to raise the Two Brothers Totem Pole in Jasper.  It was beautiful, moving, inspirational and historic celebration- a day that brought together more than 15 different regional Indigenous communities in a joyful celebration of their history and culture. 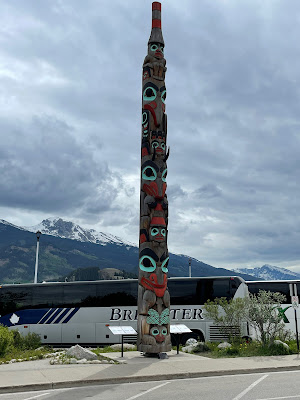 We went to Montanas for lunch.  They advertised BBQ, but it wasn’t really BBQ just food with barbecue sauce!  However what we had was very good.  I had a chicken burger and Richard sizzling chicken fajitas.  One of the reasons to eat out was to make use of their wi-fi but it was pretty useless and nothing backed up.
We saw this little caravan out of the restaurant window. 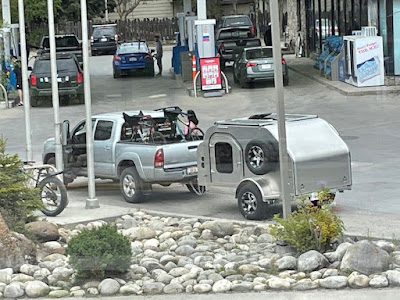 Another thing we could see out of the restaurant window were the goods trains going by.  For each one the road had to be closed and then the train would cross taking at least 3 minutes each – I lost count of how many there were but there must have been one every 15 minutes.  There were also passengers trains which must have terminated at Jasper station, these had to go through the crossing, up the track while the points were changed, then back down through the crossing to station.  The crossing seemed to be closed more than it was open. 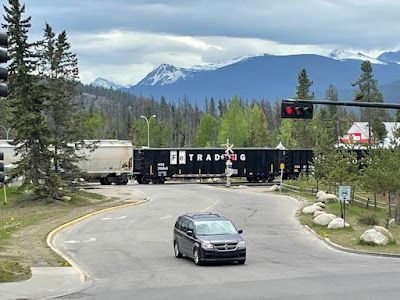 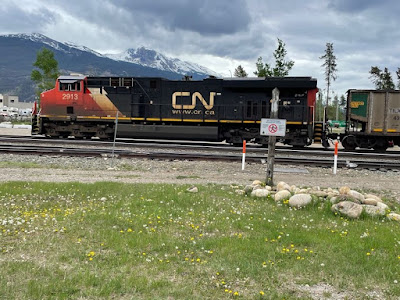 We made a quick visit to the liquor store as I had bought a red on Friday instead of white and that would never do – for me anyway!
We set off for Mount Robson which is British Columbia.  We have flown over three borders this holiday but this is the first one we had driven over. The scenery is a little bit different in BC, and there were lakes after lakes.  Sadly it was rainy and miserable so I didn’t take many photos but I’m sure there will be more to come! 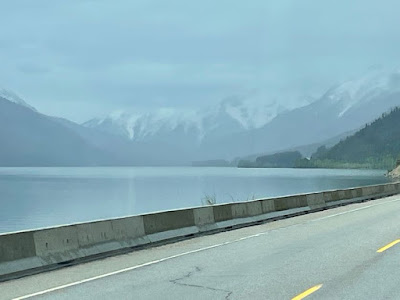 We pulled in to the car park for Overlander Falls but decided an hour’s walk with the chance of rain probably wasn’t a good idea.
We found a tourist information office for BC which also doubled up as check in for the Mount Robson campgrounds.  There were a lot of brochures for the local parks and Richard bought a map.  The lady at the cash desk asked what wildlife we had seen and we told her about Barnaby.  She told us that a mama bear and her three cubs had been spotted on the trail to the Overlander Falls!!  Maybe it’s just as well we didn’t go.
We found our pitch which is very nice indeed, each one been built up and was flat and even, it was really nice.  We sat outside doing some more passage planning until there was a short shower of rain which made us move inside.
When we were back in Ontario I had ordered a 12 volt power pack for my sleep machine so that we could use it when we aren’t connect to mains electricity.  Tomorrow night we will not have mains, so we decided to go self contained tonight (even though we had electricity).  If it all went horribly wrong then we could plug back into the mains!  The trouble was that I couldn’t find the adaptor. We both searched and searched and I had a horrible feeling that when I threw away the box in Toronto I must have thrown the adaptor away with it.  I had checked every cupboard in the bathroom (there are quite a few!) but just before going to bed we had one last search and I found it in the cupboard under the basin in the bathroom.  I had looked in there twice before but they were obviously “man looks”!
As we crossed over into BC we had to put our watches back another hour which now makes us 8 hours behind the UK.


Monday 6th June – Wells Gray Provincial Park
We managed very well being “self contained”.  My sleep machine worked well and the fridge stayed on – it was running on propane.  Richard put the water heater on when he first got up and we had plenty of hot water for our showers.
The RV has three tanks.  One for fresh water, one for grey water (washing up etc.) and a black tank which is for …. Well I’m sure you can guess!  We do seem to use a lot of fresh water which also means the grey tank fills up quickly too.  We wondered how people who don’t move on very often manage and realised that they were using the shower blocks.  As we are out and about in the RV every day it isn’t a problem to do the filling and emptying.
I had been woken in the night by a train hooter hooting frantically, I thought it was never going to stop.  I hope it wasn’t a bear on the line.
We were heading for Wells Gray Provincial Park today, and sadly it was drizzling and the clouds were very low. 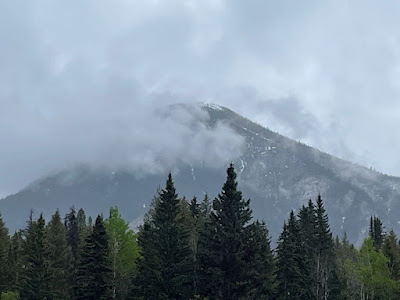 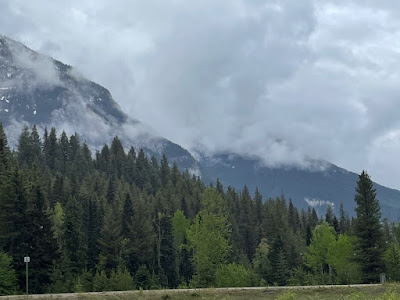 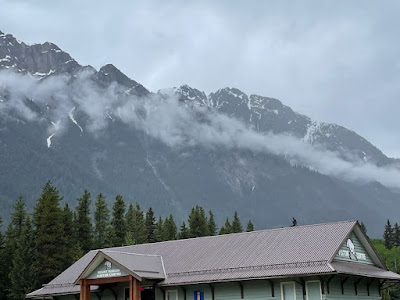 We joined Highway 5 and noticed, what we thought was, a new road being built beside the existing one.  Gradually we realised that it was a pipeline which is an expansion of one built in 1953 and runs between Edmonton and Vancouver (715 miles) and will up the capacity from 300,000 barrels of oil per day to 890,000!  It was pretty amazing as it was up cliffs and then back down again. 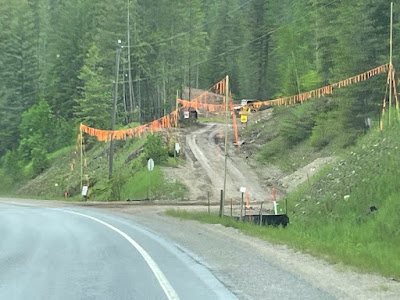 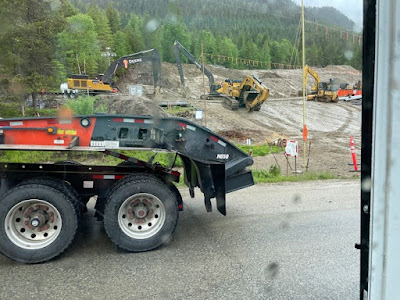 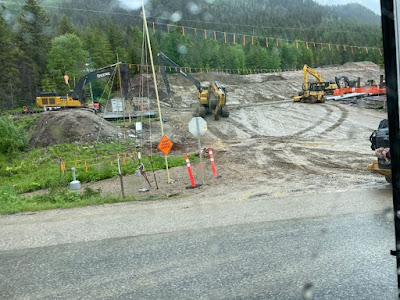 Wells Gray was a 2½ drive in the mist and at times, pouring rain.  When we arrived though it was sunny and warm.  We went into the Tourist Information and found out about the two waterfalls we wanted to visit.  They also had very good free Wi-Fi which I made use of!
We drove up to Helmken Falls which, at 463 feet, is the 4th tallest waterfall in Canada.  The fall is, what is known as, a plunging punchbowl.  It was stunning, I thought that the water looked a bit like a bridal veil.  Next was Dawson Falls which is a block fall which means that it wide rather than high.  Sadly it started to rain again which put paid to the third waterfall we were going to see. 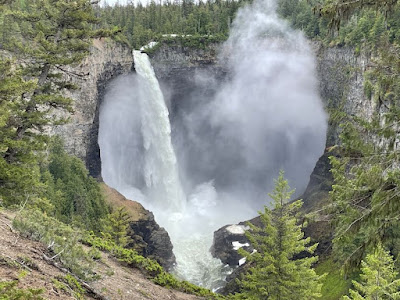 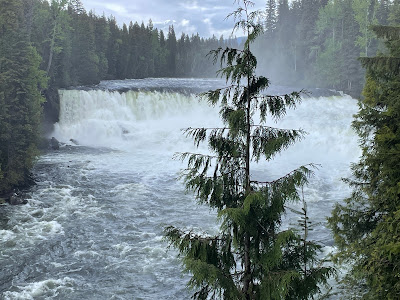 Dawson Falls
To protect the Helmken Falls, Wells Gray Provincial Park was created in 1939.  It is known as the Land of 40 Named Waterfalls – and counting!  It was named after the Minister of Lands who suggested that the park be formed, his name was Arthur Wellsley (Wells was his nickname) 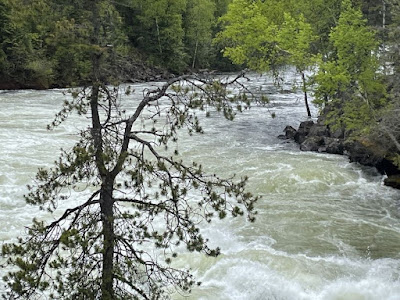 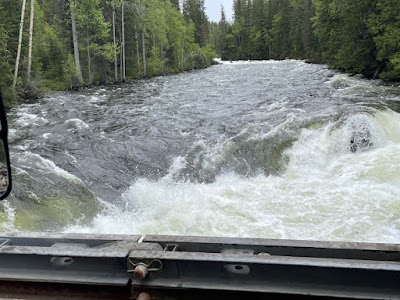 Back out of the park we did a quick grocery shop then headed to the North Thompson Provincial Campground our first proper night without power!  Our pitch was right on the edge of the North Thompson River and we could see the water, which was about 10 yards away, through the trees.
Posted by Linda Gifford-Hull at 19:54