Tuesday 7th June
Neither of us slept well.  It was all well and good having a beautiful river on our doorstep but I had forgotten that where there is a river, there is often a railway line!  The trains continued right through the night and seem to be struggling up a hill, but I guess there wasn’t one!  Here is our pitch. 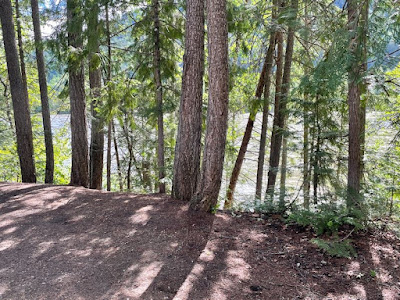 We were going to Kamloops to see the Heritage Railway Museum and set off in lovely sunshine.
We soon caught up with the pipeline, in fact the first works were inside the Park. 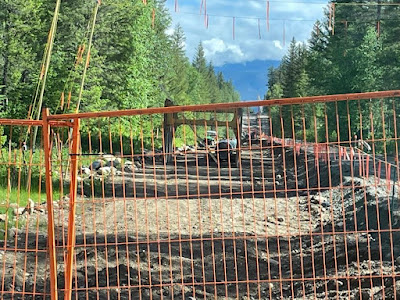 At one stage it went straight up a small mountain or maybe it was a big hill, sadly I wasn’t on the ball and missed the photo opportunity.  The work runs on one side of the road then crosses over to the other side.  When the time comes for roads to be dug up and the pipes joined it will be chaos! 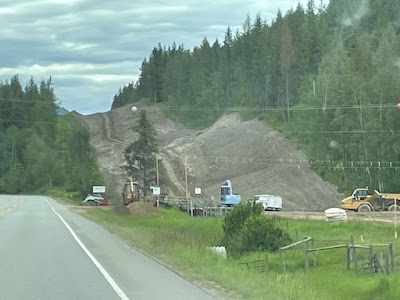 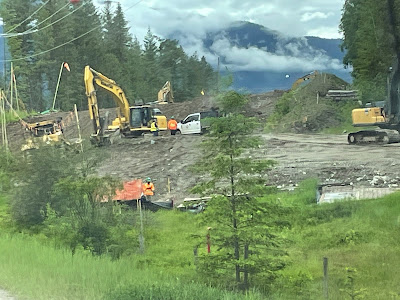 I just love this traffic signal, the bar with the flag raises when the red light goes out. 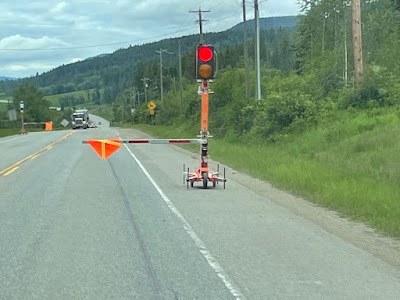 The scenery in BC Rockies is very different to that of the Alberta Rockies.  To start with there is very little snow and everywhere is very green.  The valleys are also wide as opposed to Albert’s narrow ones.  There were lots of small farms with both arable and animals though we didn’t see any milk cows or sheep.
Richard needed to get fuel and we discovered that it much more expensive in BC than Alberta.  Here it is $2.16 per litre and in Alberta is was $1.78 per litre.  That is a big difference.

We headed into Kamloops to find the Railway Museum, however it wasn’t where it should have been!  Both Google Maps and the Museum’s own directions didn’t take us to the correct place and Richard got so fed up that we headed out of the town and back on our way south.

We found the most amazing rest area for lunch.  It was at 1821 feet with a view to die for. 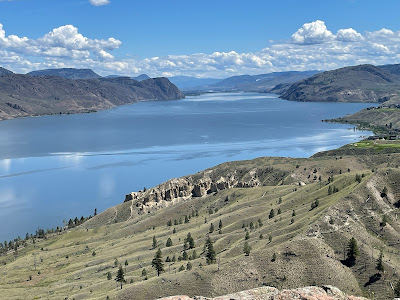 On the other side of the lake we could see a very long goods train snaking along, it looked so tiny.  I did this little video to show it.
We had to leave the wonderful view and continue on our way to Ashcroft, as very small town on the Thompson River.  I’m not sure how far to descended but it was quite a way.
Just before the entrance to the site we saw this little red place.  It was the historic fire hall which was rebuilt in 1919 after a major fire in 1916. 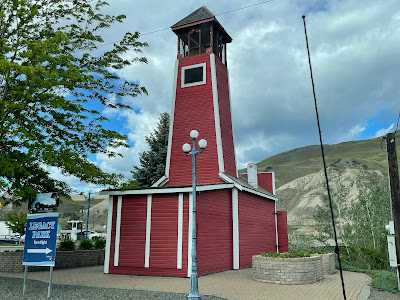 The small site was on the edge of the river with a railway line over the other side of the river and another one behind us.  However there didn’t seem to be too many trains during the day.  Our pitch was even nearer the water than last night and was fully serviced with water, sewer and electricity plus it had Wi-Fi, all for $35.  We are booked into a bigger site in Whistler on Thursday which is also fully serviced and they want $91 and there is NO Wi-Fi!
There was a sign just beside our pitch which was made of mosaic.  It was made to commemorate 100 years of the Canadian National Railway (1919 – 2019).  The railway spans North America from Eastern to Western Canada and south to the Gulf of Mexico. 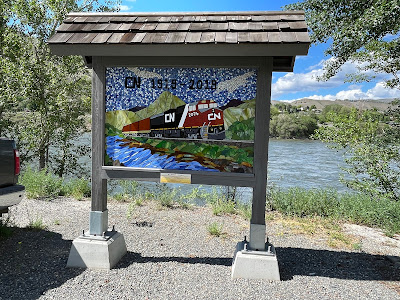 Wednesday 8th June
What is worse than a rail track running down the opposite side on the lake you are camped by, during the night?  Two rail tracks!  One on the opposite side of the river bank and one right behind us.  They really weren’t that much of a problem during the day but for some unknown reason trains were stopping and hooting like mad in the middle of the night.  I know I was woken up three times but Richard said it was more than that.  It is difficult as we are driving in a valley and that’s just where the trains want to be too.
We popped into the local grocery store called Safety Mart (!) for a few things.  I didn’t need fruit or veg which was a real shame as they looked so wonderful. 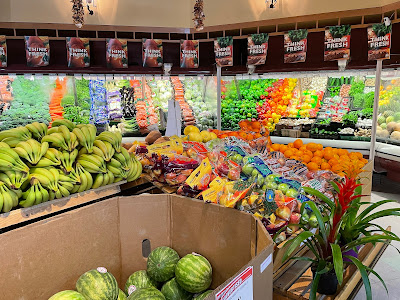 We we crossed the river out of Ashcroft we could see all the signs in the photo below.  The “Grad” signs were started with the Ashcroft Secondary School's graduating class of 1975.  The idea devised as a responsible way to acknowledge the right of passage known as not only acted as a deterrent to unwanted graffiti but also became a tradition with subsequent graduating classes.  Although the 1975 graduating class was the first to proudly erect their sign on the hill, the 1974 class got together on their 10 year grad reunion and added their own to the growing number on the hill. 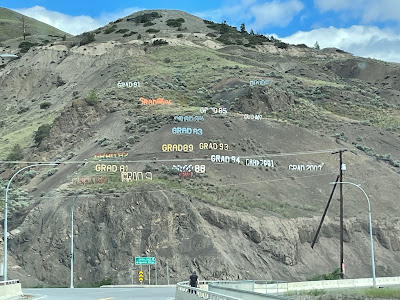 We returned to Highway 99 where to start with we felt we were in “hick” country.  There were scruffy wooden bungalows, no more than shacks really, with masses of derelict cars and farm machinery on their property.  I’m sorry to say that it looked dreadful.  As we climbed out of the valley so the scenery changed and became absolutely stunning scenery.  We passed through First Nation (Indian) country – I think it was three different tribal areas.  We had coffee beside a lovely lake and then just marvelled at everything.  I don’t really think my photos do the scenery any real justice. 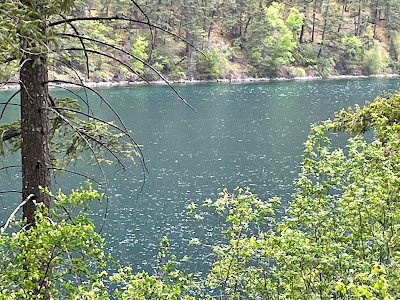 We stopped at a view point to see the Fraser River charging it’s way through the valley.  I also noticed a tunnel entrance which must have been for one of the railways. 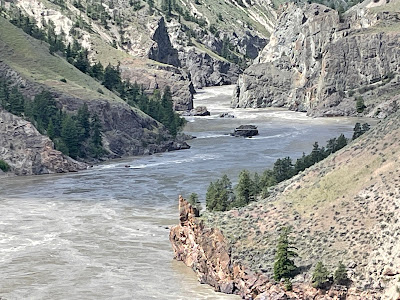 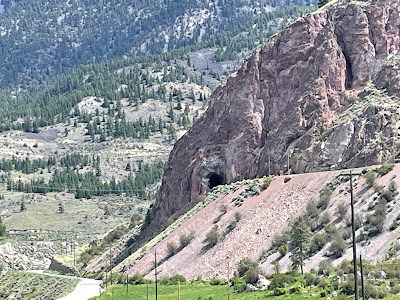 As we approached the little town of Lillooet, I just happened to look to my right and saw a bear walking along the railway track that was clinging to the mountain side on the other side of the valley.  He was a black bear, and I reckon he was quite big as I don’t think I would have noticed the one we saw the other day which was quite small.  Even Richard could see him but of course by the time I had my camera out it was too late.
We drove through Lillooet, but there wasn’t much to see. I know that there is a Golden Miles of History Tour which is named for the wealth of gold dust mined from the downtown section of Main Street that also became the supply hub for the Cariboo Goldfields, but we didn’t have time to do it.
If we had done Lillooet’s Golden Miles of History Tour we have discovered that on May 10th 1911. Sixteen St’at’imc Chiefs signed a declaration asserting their ownership of territorial lands and protesting the poor treatment they were receiving from the provincial and federal governments with respect to the alienation of land by settlers at Seton Portage.  The declaration begins “We the underwritten chiefs of the Lillooet tribe (being all the chiefs of said tribe) declare as follows. “We speak the truth, and we speak for the whole tribe, numbering about 1400 people at the present time. We claim that we are the rightful owner of our tribal territory, and everything pertaining thereto.  We have always lived in our Country; at no time have we ever deserted it, or left it to others.  We have retained it from the invasion of other tribes at the cost of our blood.  Our ancestors were in possession of our Country centuries before the whites came.  It is the same yesterday, when the latter came, and like the day before when the first fur traders came.”  Thought provoking?
We would also have learnt that one of the reasons there are so many Chinese in the area is because in 1871 when BC became part of Canada, work started on a railroad which would connect the Pacific Coast to the rest of the country.  Thousands of workers were required and, at the time, the easiest way to bring them in as by ship from Canada.
Lillooet is one of the oldest towns in the province, its history is the history of British Columbia.  Once the largest settlement west of Chicago and north of San Francisco as well as the terminus of the first road built into the interior of B.C.
Out of Lillooet we climbed up and up.  We stopped by Seton Lake Reservoir for our lunch – what a view of the most beautiful lake. 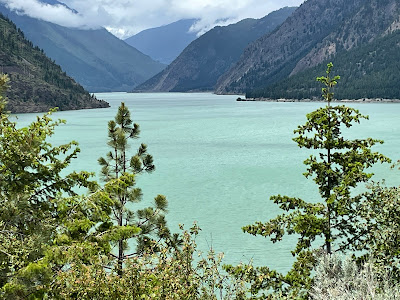 We could even see the railway still clinging to the mountain side! 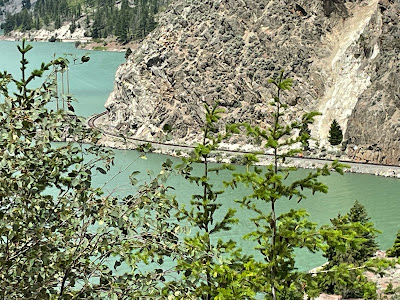 There were signs everywhere telling us that we were in Grizzly Bear country, but we didn’t spot one.  However, we did stop on occasions for me to take photos.
The road out of Lillooet, Duffy Lake Lane, was a switch back, but all the time the river was beside us or maybe a bit lower than us!  We could see waterfalls on our left coming down out of the mountains.  Probably, once up a time, I would have said that they were stunning, but I’ve been spoilt now and today they warranted a “Linda beautiful” award!  The mountains, however, were stunning.  It’s hard to write about how I felt about them as there aren’t really enough words to describe them, but lets try remarkable, extraordinary, staggering and incredible.  Don’t worry I haven’t swallowed a dictionary! 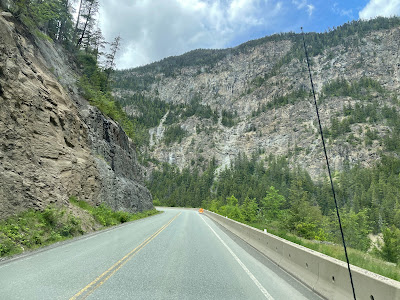 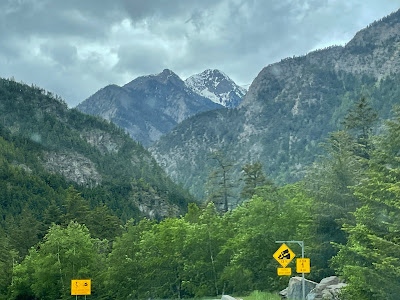 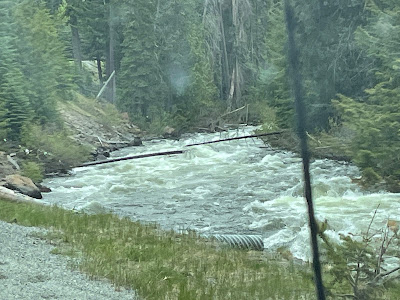 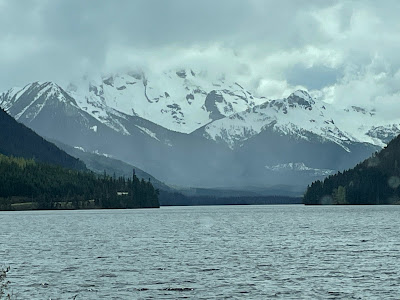 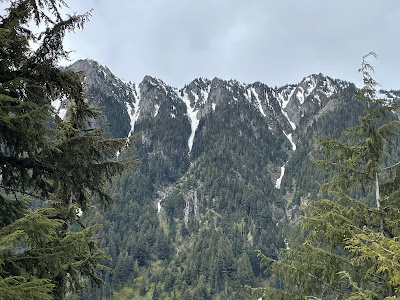 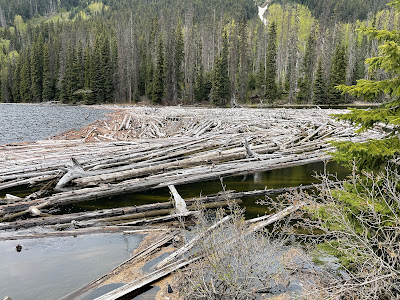 We then started our descent out of the mountains.  The road was a little scary, with tight corners and steep hills.  We came out of our “little area of heaven” and into Pemberton.  From there it was a hop, skip and a jump to Nairn Falls Provincial Park where we were staying the night.
Today was very different to the Icefields Parkway, which was also stunning, but in a way I think today’s scenery was even more stunning!
Posted by Linda Gifford-Hull at 17:08