We set off across the Island to the west coast and the Pacific Rim National Park Reserve.

Our first stop was Coombs Country Market which is best known for it’s goats on the roof!  I was just about to take a photo of one of the goats when the sprinklers came on and it ran off, you would think they would be used to them by now!  There was a lovely greengrocers and we had to buy a few things!  The main shop was bit like the food shops we get in garden centres with all sorts of interesting things that you really don’t want!  We did want a few things though! 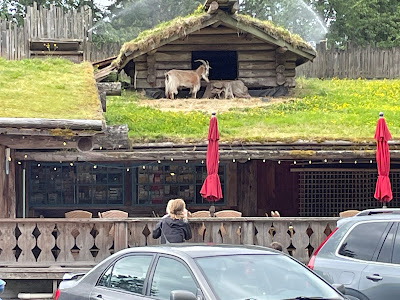 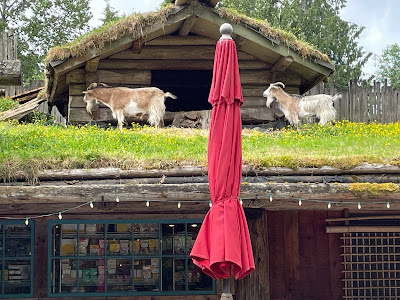 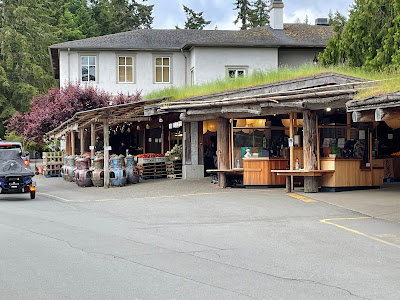 Off to Port Alberni next where there was supposed to be a steam train and museum, BUT I had written on my notes that it might not be running.  We found the old station where it was supposed to be but the whole place was locked up and there wasn’t a sign of a train shed anywhere.  I’ve since discovered that they train hasn’t run since 2018.  The train was supposed to have run up to McLean Mill National Historic Site so we decided to drive up there instead.
When we arrived at McLean Mill it was a bit like the Marie Celeste!  We could hear music playing but not a soul about.  We followed some signs and ended up at the mill.  Again there was no one around, it was crazy!  We had a wander around but it would have been nice to ask some questions of someone!  I did find this cottage interesting though.  It was a workers cottage which had been built in 1929 with a kitchen, front room and two bedrooms.  Each time a new family arrived they built a bit more on or knocked a bit off!  The last person to live there was the caretaker and he moved out in the 1980s.. 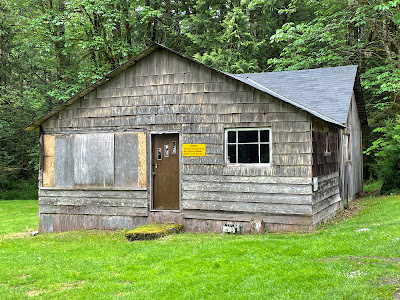 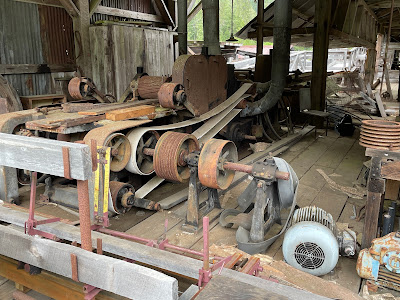 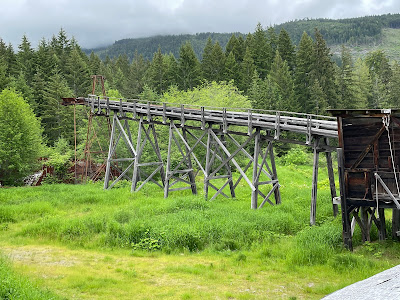 The McLean Mill National Historic Site was acquired by the City of Port Alberni in 1988 through donations from the McLean family and MacMillan Bloedel (now Weyerhaeuser).  With the assistance of funding from Parks Canada and Forest Renewal B.C., the sawmill has been restored to a fully working condition, the mill pond and the dam have been reconstructed and some of the residences and service buildings have been preserved.
Our next stop was to see the Martin Mars water bombers at Sproat Lake, but as we arrived there was a lorry reversing down the hill to the lake with an oversized load on.  There was already a queue of five vehicles so we decided to give it a miss.  We will try again on our way back.

We drove through, what is called, Cathedral Grove.  The trees are Douglas Firs and some are believed to be more than 800 years old. 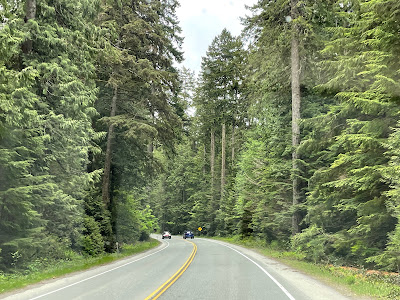 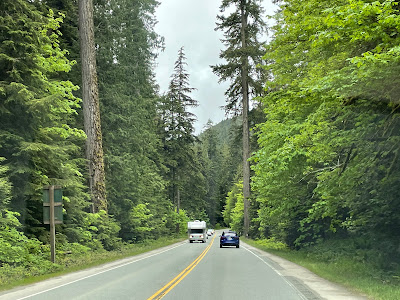 The road between Port Alberni is the main, and only, road across the Island to the west coast and it is the most diabolical road out!  The RV is a bit noisy at the best of times, but the noise was dreadful as we bumped and crashed along the road!  At one place they are replacing the road – they are closing the road every night between 11pm and 5am??? And this is the only road to Torino and Ucleulet! 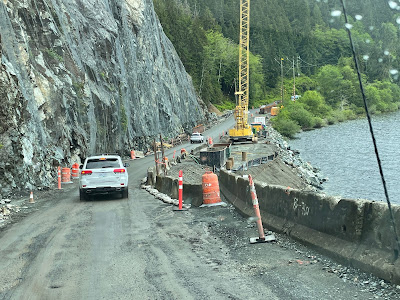 Once we reached the sea the road up to Tofino was much better.  We drove through the Pacific Rim National Park Reserve and I could see the Pacific Ocean between the trees – the PACIFIC OCEAN!!!
We found our campsite which, in fact, is a rather smart place with some lovely cabins to rent as well as RV camping.  The pitches are rather close together but there are bushes between them, however these make the pitch rather dark.  I’m sure in the summer this is a blessing but we could have done with some sunshine!
When we checked in we were given a piece of paper telling us what to do in case of a tsunami!  Head for the hills is what I say!! 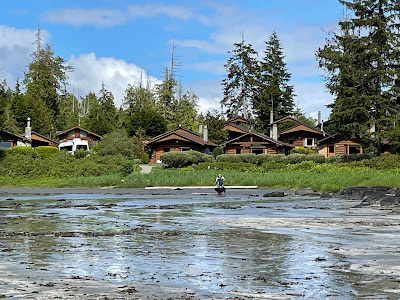 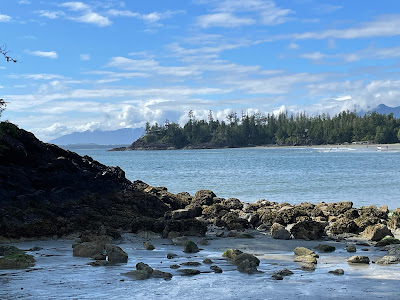 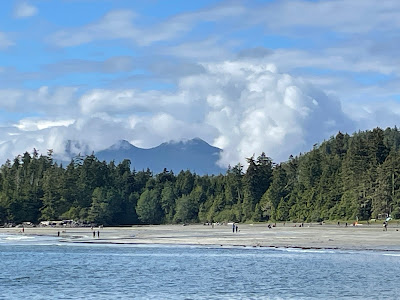 We woke up to a lovely sunny day though we could only see it through the skylights!

We drove into Tofino, which we both thought would be a bustling seaside/waterfront town, but it wasn’t!  We had asked at the campsite where we could park the RV and we ended up a bit away from the town which we walked into, but were a little disappointed.  Down on water’s edge there was a jetty with a sea plane tied up but that was about it.  However, the view down there was amazing and beautiful.  I video messaged my sister as I just wanted to share it with her as they had hoped to get to the Island about 15 years ago when they hired an RV, but they ran out of time. 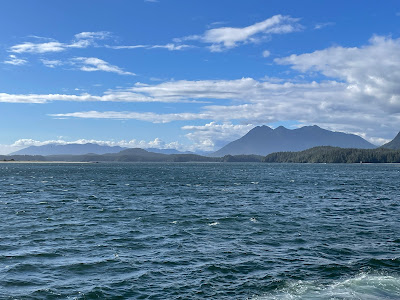 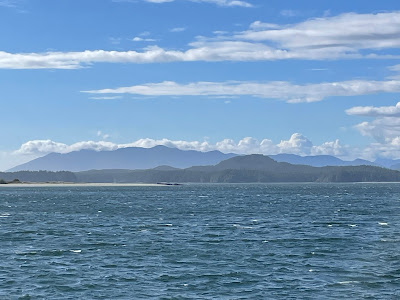 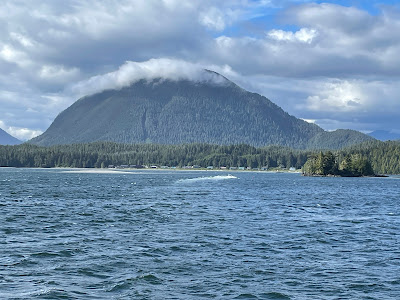 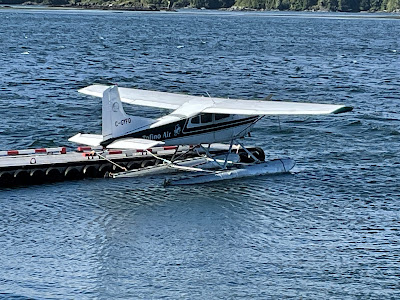 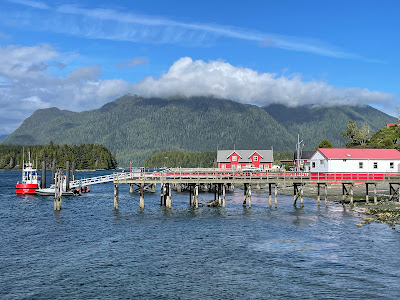 Tofino is located in the traditional territory of the Tla-o-qui-aht First Nation of the Nuu-chah-nulth peoples. First Nations have occupied the area for at least 5,000 years.  The first Europeans in the area were two explorers, Spanish captain Juan Josef Pérez Hernández in 1774 and British captain James Cook in 1778. A thriving but conflict-fraught trade soon began between the Nuu-chah-nulth and seafaring traders, the majority of whom were American and British. The First Nations exchanged sea otter pelts for goods such as firearms, alcohol and food products. Nuu-chah-nulth chiefs Maquinna and Wickananish were influential figures in this early trade.  In 1854, British colonial agent William Banfield and two business partners established a trading post on Stubbs (now Clayoquot) Island, near present-day Tofino. The first non-Indigenous community in the area grew around it. Additional settlers came to the future site of Tofino and other locations along the Esowista Peninsula starting in the 1890s.
We walked around the town and stopped for a coffee in a vegan and vegetarian café, it wasn’t the best coffee 😕. 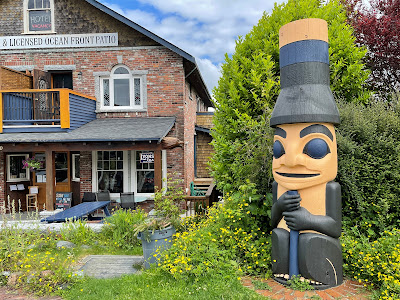 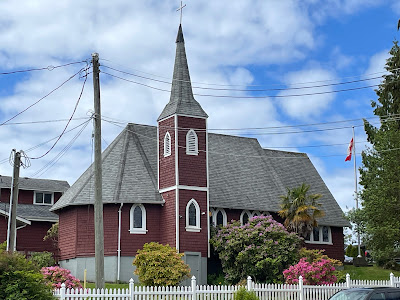 We then decided to go back along the coast road to the visitor centre where they told us that the best place to park up was at Long Beach.  We wanted to see the Ocean and spend the afternoon in the sun, whether it be on the beach or in the RV.  The car park was pretty large but, again, in the summer I shouldn’t think there is any free space.  We parked up, had lunch then took our chairs onto the beach only it was far too windy and chilly.  I went and had a paddle, I had to say that I had been in the Pacific! 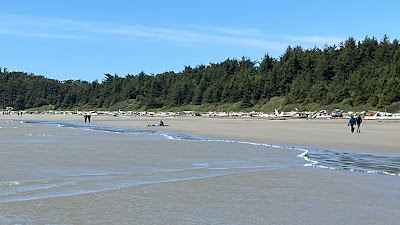 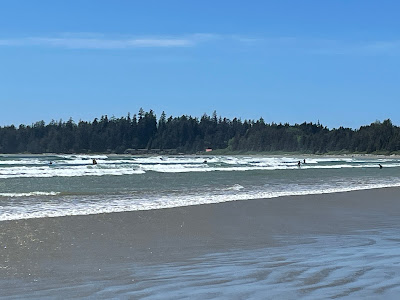 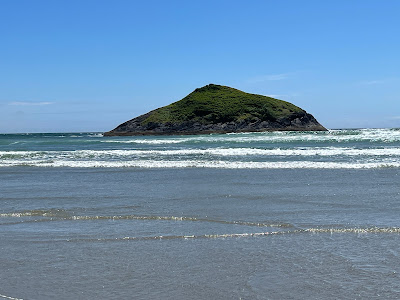 We were amazed by the amount of wood that had been deposited on the beach. 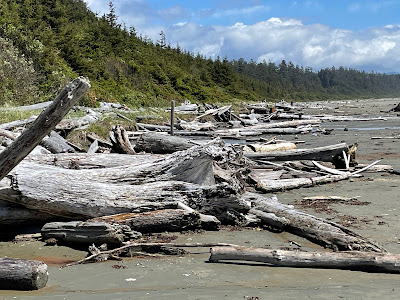 We went back to the RV and had a nice chilled afternoon, which was really needed as it has been all go recently.  It was then back to the campsite for dinner.
I made this short video of the beach this afternoon, however you can hardly hear me for the wind noise!!

Posted by Linda Gifford-Hull at 18:03