Monday 13th June – Englishman Falls Provincial Park
Each morning I take a photo of our pitch (I’ve only missed two), and this morning I noticed this big old tree right behind us! 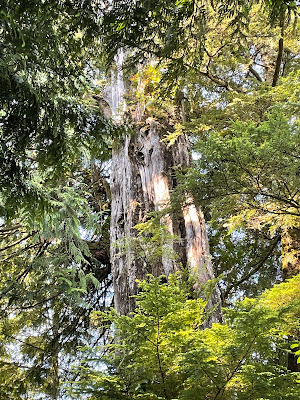 It was back across the island today but not before visiting the Amphitrite Point Lighthouse at Ucluelet.  The point was named after a naval warship, HMS Amphitrite in 1859 by Captain George H. Richards of the Royal Navy who was responsible for surveying much of Vancouver Island.  The original wooden lighthouse was built in 1906, after a tragic shipwreck in 1905.  The lighthouse was destroyed by storm waves in 1914 and replaced with the current structure in 1915.  The lighthouse was built like a bunker to withstand the brutal force of the sea.  We could hear, what Richard called, a moaning buoy, but the Canadians call it a whistle buoy, a moaning buoy sums it up better I think. 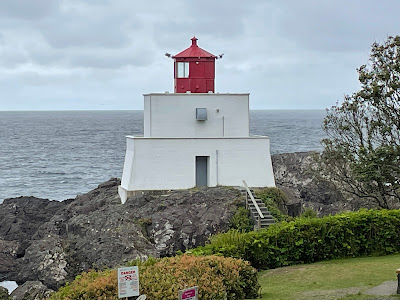 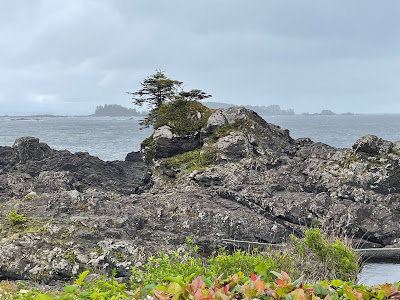 From the lighthouse we called in at the supermarket and liquor store.  Please remember that we don’t have that much storage so are having to buy little and often – we aren’t alcoholics!!
Ucluelet is pronounced “you-KLEW-let”!  The name comes from a Nuu-chat-nuthatch word meaning “safe harbour” or “safe landing place”.  The Ucluth peninsula has a significant history; having been inhabited a First Nation tribe, which I can’t type as my keyboard just doesn’t have the letters or symbols.  They were the people of the safe harbour and lived there for thousands of years.  Since the early days “Life on the Edge” has been tied to both land and sea.  This was true for the tribe, who have strong stories and legends about living in the Ucleulet area dating back as far a 4,300+ years ago.
We then headed east across the Island knowing the state of the road in front of us.  Up to the road works was probably the worst, but after the roadworks for a few miles, it wasn’t much better.  The queue at the road works was very long, but we did seem to get through quite quickly, but it is very slow going due to state of the road or maybe track would be a better word.  I took some more photos as the works looked worse from today’s direction. 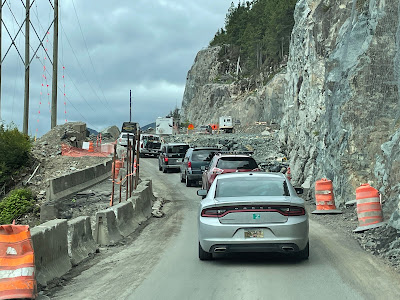 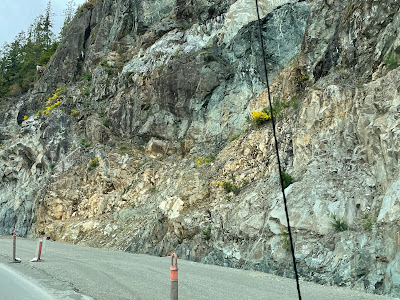 We noticed that today there were more private RVs than rented ones, it’s usually the other way round.  I wonder why?
We stopped for lunch at Sproat Lake hoping to see Martin Mars water bomber, however we couldn’t see it anywhere.  We saw a sign for some petroglyphs.  If you don’t know what they are, don’t worry neither did we!!  They are, in fact, carvings made by the First Nations people.  They were probably made with a sharpened stick using wet sand as an abrasive.  The lands around this area were historically occupied by the Hupacasath First Nations people.  This photo was taken in the 1970s, it doesn’t look anything like that today. 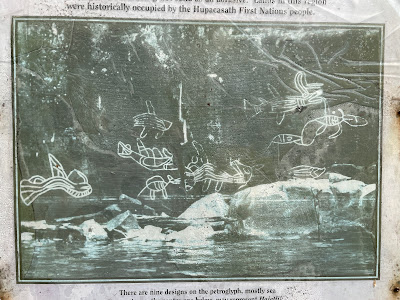 When we got to the petroglyph site there was a pontoon so that people could walk out and see them as they were right on the water’s edge and one or two looked as if they were under the water.  However, there was strong wind blowing across the lake causing waves and there was no way I was going onto the pontoon, there wasn’t a handrail or anything and looked highly precarious!  I feel pretty sure it wouldn’t be allowed like that in the UK!  We could just about see the carvings from the angle we were at. 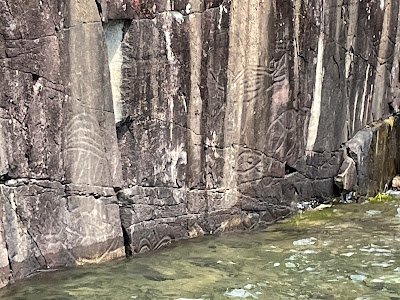 As we walked back to the RV we finally saw it, the Martin Mars water bomber 😀  It was a distance away, but it was there.  Retired now the planes used to be a big part of fighting forest fires on Vancouver Island. They used to use Sproat Lake for their runway and to scoop up water to take to forest fire areas. The water bombers can take in up to 27 tons of water off the lake surface and are the largest water bombers in the world. 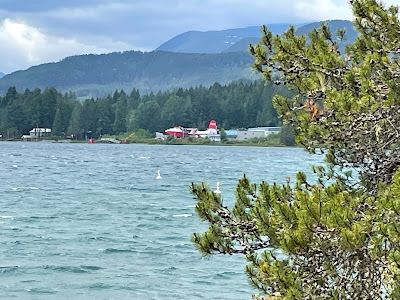 We passed through Port Alberni and eventually came to our turning off the Pacific Rim Highway to go to Englishman Falls Provincial Park.  I love the way the road is called a highway – I’ve seen English lanes in better condition than this one.
It was nice and sunny when we arrived at our pitch and the sun shining through the trees was really pretty.  There were a big trees (Douglas fir, cedar and hemlock) behind us with a small stream running there too.  A First Nations legend mentioned the skeleton of a white man found near the falls, hence it’s name. 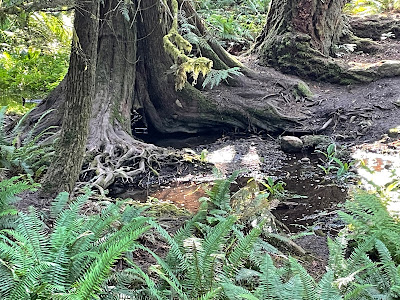 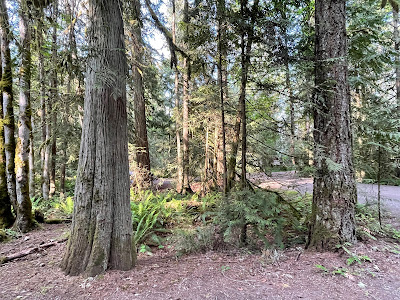 Tuesday 14th June – Fort Victoria RV Park
It was a lovely sunny morning and through the trees it looked lovely. 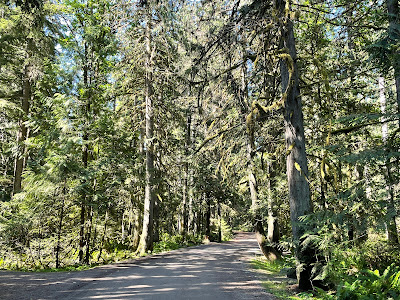 Before we left we walked to the Englishman River Lower Falls, it was quite a hike (for us anyway) but we made it!  It was very pretty, but just imagine when the river is in flood!  We decided not to walk to the Upper Falls as Richard’s knees were hurting and we knew we had a lot of walking to do the next day. 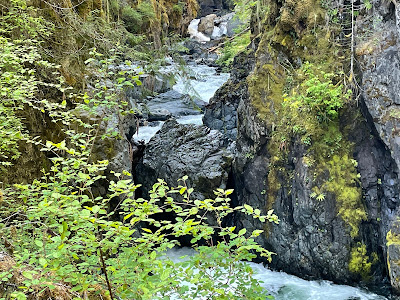 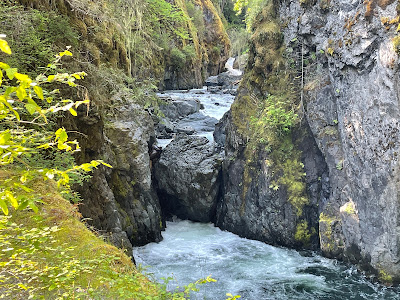 We went back to the Coombs Country Market as I really wanted to buy a hat I seen on out last visit.  One was too small and one too big, so I bought the big one hoping that I can make it shrink! 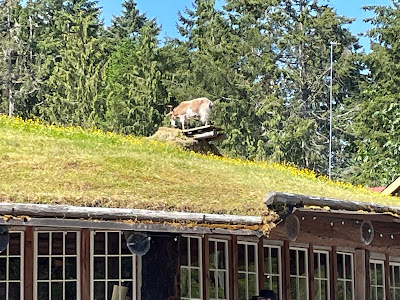 When we got back to the Mokey II she had obviously decided to flag a couple of other CanaDream RVs down for a party! 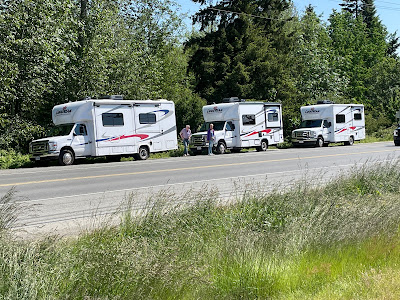 Back on Highway 1 we headed down to Victoria.  We stopped for coffee and I commented on a car parked in a very odd place, then we realised the driver had a camera – it was a plain police car doing speed checks.  Suddenly every light on the car was on and he sped off after some unsuspecting soul! 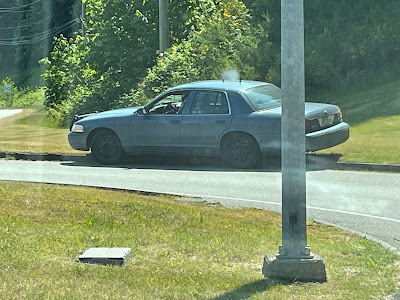 We had two stops to make today.  The first was to Chemainus to see their outdoor murals, which I believe is the biggest collection in the world.  The town is only small but every corner you turn there is another mural and they are extremely good.  The town was founded as an unincorporated logging town in 1858, and is now famous for its 53 outdoor murals. This outdoor gallery has given birth to many businesses, including a theatre, antiques dealers, and eateries. The tourist industry stemming from the murals helped rejuvenate the town after its large sawmill closed in the early 1980s and was replaced by a smaller, more efficient, mill. The name Chemainus comes from the native shaman and prophet "Tsa-meeun-is" meaning broken chest. Legend says that the man survived a massive wound in his chest from an arrow in battle to become a powerful chief.
These are just a few of my photos. 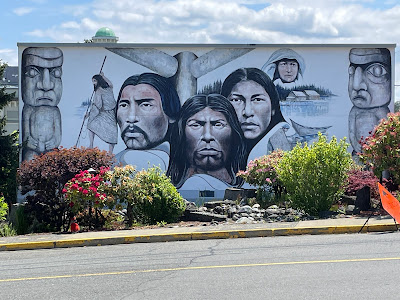 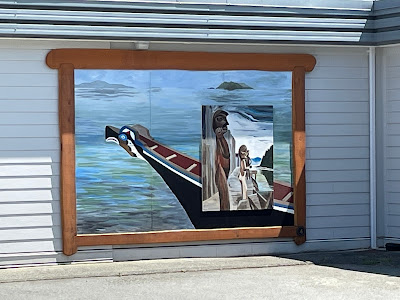 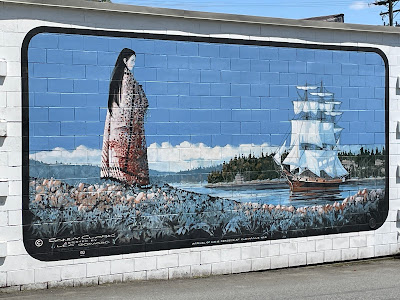 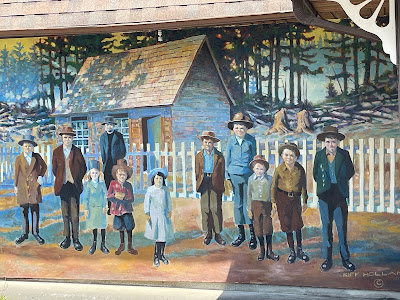 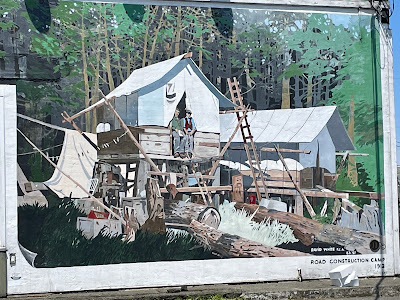 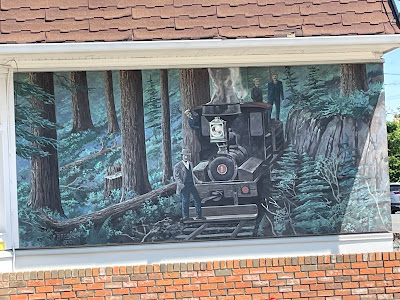 From where we parked the RV we could see logs floating in a large bay.  We assumed they had been floated down a river or was that just being a bit romantic! 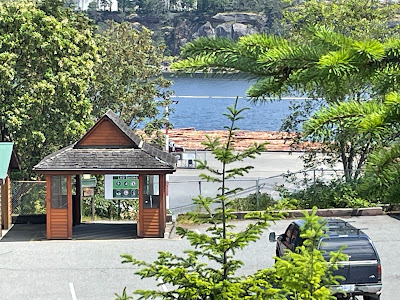 Our next stop was Duncan, which is called a small city but looked more like an ever grown town to us!  Duncan is known for it’s totem poles and had 44 totem poles in the collection, however one was destroyed in an auto accident, one was gifted to Kaikohe, New Zealand and one returned to earth. The average life span of a totem pole is 50 years. Tradition sees old totem poles return to the earth at the end of their natural lives so that stories can continue for future generations. The City was officially named "City of Totems" in 1985.  We found 38!
Once again these are only a few of my photos. 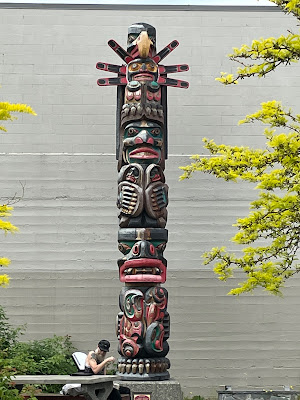 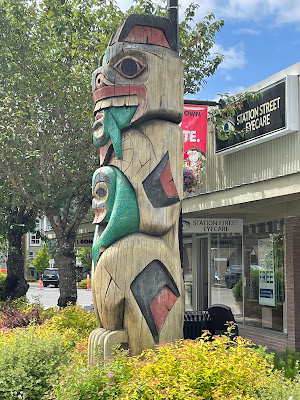 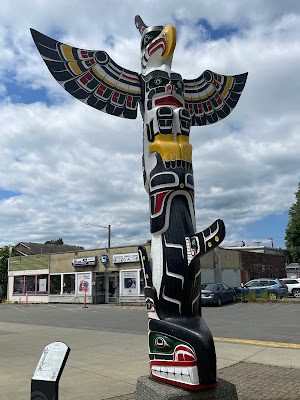 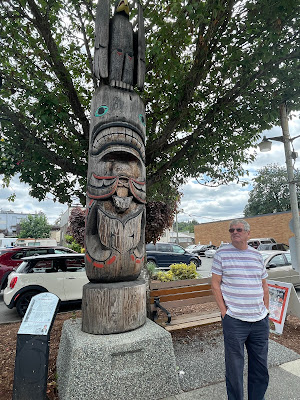 I think once I get home I will not only write a blog post on the First Nation people but will also find a way of publishing all my photos from today.
We arrived at Fort Victoria RV Park.  We were all rather crammed in together but for us it didn’t matter as we were off to Victoria for the day the next day.  However, the sites has an an amazing laundry for a camp site – 12 big washing machines and the same in driers.  I did our last wash before getting home.
If anyone is wondering how Muffin is doing while we are away.  He is having a lovely time in Wiltshire with his Uncle James.  When told the other day that it was only a few more days before he went home. He turned round and said "Excuse me? What are you talking about?" Then rolled over to have his belly tickled! 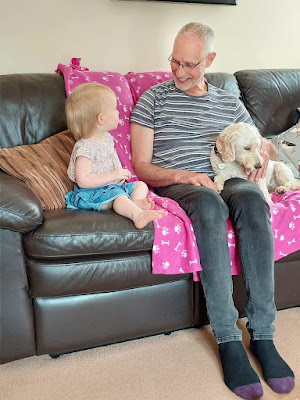 Posted by Linda Gifford-Hull at 03:49