We were ready to leave about 10.30am and as we pulled out a boat was coming out of the next lock.

As we moved into the lock another boat came round the corner, so we shared the Buckby flight with them.  This sharing is certainly helping Richard’s knee. 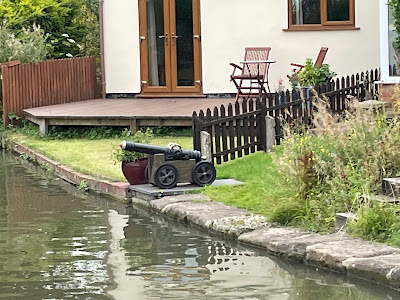 At the second to last lock there was a lady who told us that there was a dead rat in the next lock.  She said that you could make an Eastenders episode out of it!  How did it die?  Was it pushed or did it jump?  Was it sober or drunk?  We ended up working out that it had just lost its job, got home and seen it’s electricity bill and went to the pub and got drunk.  The only thing we couldn’t work out was did it fall in the lock or did it commit suicide?

After the lock we had 13 miles of lockless canal which we were looking forward to.  We caught up with a hire boat which was doddering along on tick over while the crew were fishing off the sides!  As it was almost lunchtime we pulled over and let them get on with it!  I doubt, however, that they would have caught anything.

We seemed to spend a lot of the 13 lockless miles on tick over as there were so many moored boats and not the most attractive of boats at that.  We came across this one 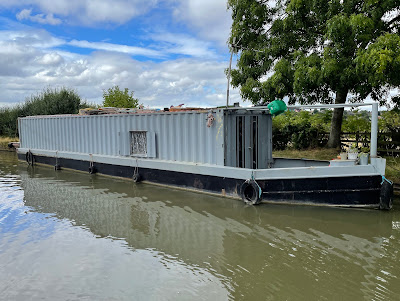 We hoped to be able to moor at Bugbrooke Wharf which we were able to do.  It was a very strange thing but I had no internet on the MiFi, but I did have it on my mobile.  There are both with 3 and the MiFi has an aerial.  I can’t quite understand the logic of that.

We walked round to the Wharf Inn for dinner.  We were disappointed as the menu was small and boring.  The food was cooked well, but it won’t be on our list of returning to. 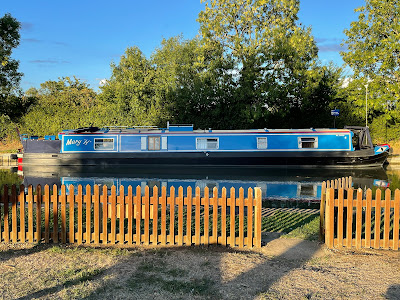 We woke up to a wet and dank morning with some rain!  It wasn’t enough to do any good for the crops though.  We live on the south coast and haven’t seen rain for weeks, maybe months, but it seems they had thunderstorms with amazing lightening shows overnight. 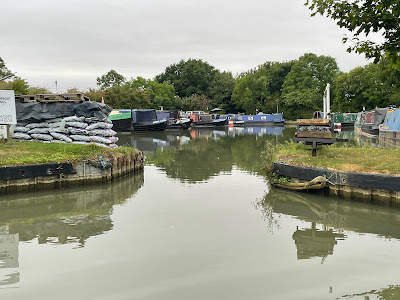 This is Bugbrooke Marina were our narrow boating started in 2009.  I met Richard in April 2009 and he had already bought Mary H in December 2008.  He had done many narrowboat holidays and my sister and brother-in-law had bought a narrowboat in 2007 so I had a fair bit of experience, though steering was not my forte then!  We had a few weekends away and a two week holiday in 2009 and then in May 2010, three days after Richard’s 60th birthday, he retired, and we set off on our first summer cruise.  We went down the Grand Union to Limehouse and then out onto the Thames, up to Lechlade, back down to the K & A and on to Bristol then back to Newbury where we overwintered for a few years.  684 miles, 487 locks in 117 days.  We have gradually slowed down, but for a few years Richard was in, what I called, hire boater mode!

We stopped at Gayton Junction to take on water and empty the elsan, then continued towards Stoke Bruerne.

Blisworth Tunnel was cold and wet but was brightened up by someone on a hire boat playing the flute!  It sounded amazing.

It was raining as we came out of the tunnel, so we pulled over for lunch, before setting off for Stoke Bruerne top lock.

Stoke Bruerne looked rather sad in the damp day, I hope it looks more cheerful when we come back.

We were joined in the lock by Blossom Too which was a bit of luck.  There were still some gongoozlers around, one of which was so excited to see a boat going through a lock.  I just hoped we didn’t mess it up – we didn’t!! 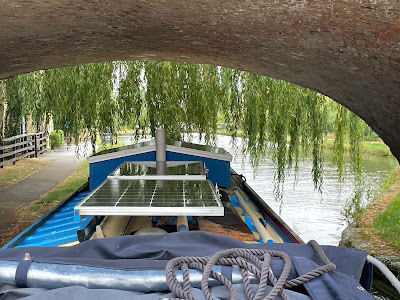 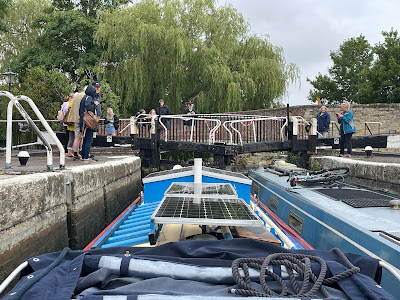 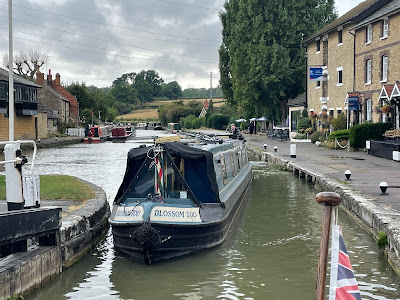 We pulled over after two locks as planned.

As we had had such a rotten meal last night, we treated ourselves to another meal at the Navigation which was very good.

To get to the pub we had to run the gauntlet of a swan family, who were not very friendly.  Fortunately, Muffin is a small dog, so Richard was able to pick him up as swans really don’t like dogs. 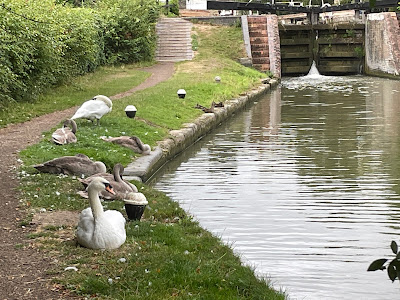 As we came out of the pub, I took this photo which I rather like. 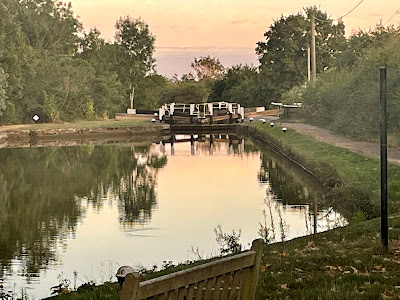 Posted by Linda Gifford-Hull at 10:29