We are back on Mary H!

We are finally back on Mary H.  It is my first visit to her since I left her in September last year!  Richard has been up a few times to do some work and he also had a week with his son, James, back in April.  If you are a blog follower, you will know that we went to Spain in February and March and then Canada in May and June.  We both caught Covid on our return from Canada and then there was the very hot weather.  Added to that my daughter and son-in-law were moving into their first house and there was decorating and lots of sorting out of “stuff” and finally our Canadian friends, Joanne and Steve, stayed with us last week.  I have to say that I have enjoyed being at home in July and August, the first time since 2009!!

When we arrived at Mary H, we had to evict the spiders and try and get rid of their webs.  The spiders are still coming out of the woodwork though!

We were staying in the marina over night as we had a Sainsbury’s delivery coming the next day.

The batteries were dead in our bedroom clock and as we were expecting Sainsburys between 9am and 10am, I didn’t sleep well worrying that we might oversleep, goodness knows why as Richard has an inbuilt alarm clock which goes off at 7.50am every morning!!

The delivery arrived about 9.15am and by the time we had unpacked the shopping and put it all away, it was time for coffee.  It was 11.30am before we left. 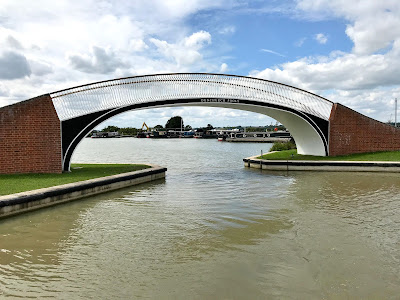 Braunston was our destination today, ready to go up the locks tomorrow.  Richard wanted to moor outside the marina, and we got the last space.  I was so tired that I slept for about an hour and felt better. 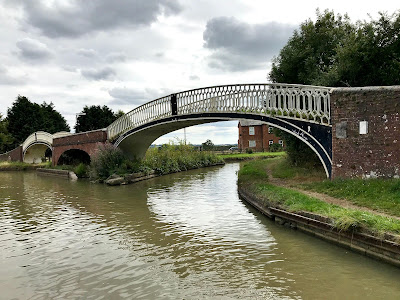 We were ready to depart at 10.15am.  The volockies were only allowing two boats at a time to go up the locks and as there was one already in the lock we were up and away quite quickly.  There was no such rule for coming down – the ones we met were all on their own.

We shared the locks with a couple who were on their way to Kilworth Marina to see a boat they were hoping to buy be surveyed.

Richard and I are a couple of old crocks this year!  He is having knee problems and is trying out a knee brace which he says is helping.  I have a bad back and have done for a few weeks now.  I went to the chiropractor at the end of July and was told to take it easy and watch how I walked until I had trained my brain that the new angle of my back was the right one.  However, I didn’t do as I was told 😕 I went again last week and was told the same thing and, guess what, I didn’t do it.  I will have to suffer until we get home when I will go again, and I WILL do as I am told! 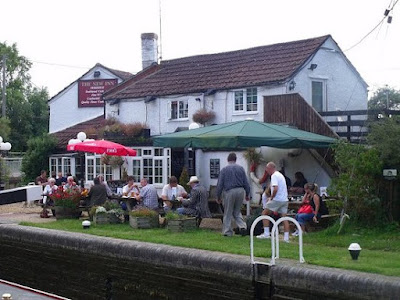 The Braunston locks with another boat were not a problem and we were soon through and into Braunston Tunnel.  I always sit down below with Muffin when we go through a tunnel – the noise of the boat hitting the wall as we passed another boat was multiplied down there!

We wandered down to the little shop to have a mooch and an ice cream.  Back in 2009 we bought Jasmine, the duck from there, and I had hoped I might have been able to find her a mate but apparently the manufacturer has gone out of business.  She has had both feet stuck back on after falls but she is still my little duck 😊 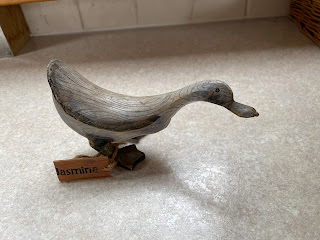 It was a lovely spot, but the smell of cow poo was not good!!  I was brought up in the country with agricultural smells, but this was overpowering!

Posted by Linda Gifford-Hull at 10:52