We made a Plan A and a Plan B for today.  Plan A was to see if we could get on the moorings at Great Linford Manor Park and if we couldn’t then Plan B was to go on to Cosgrove.

A few photos from where we were moored. 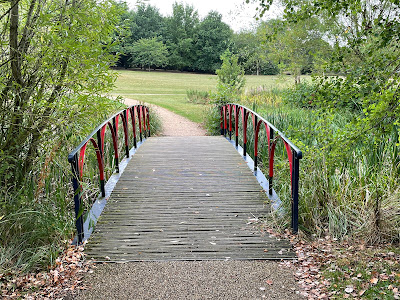 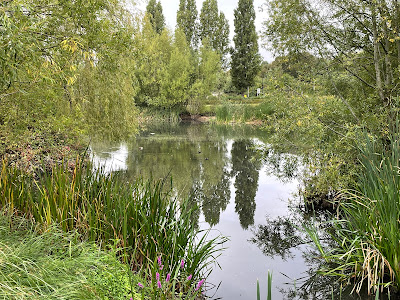 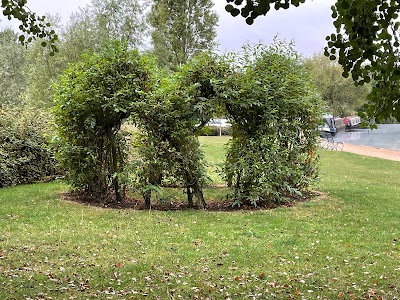 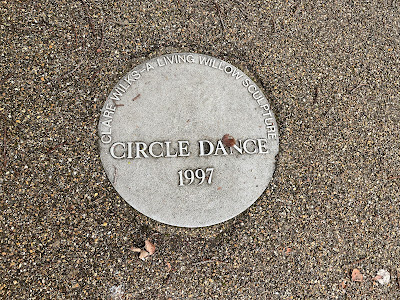 We set off nervously hoping that Plan A would happen.  As we approached the moorings, we could see that the whole stretch (well two narrowboats worth) was free.  We moored up and could see these lovely almshouses, built about 1688-90, from the boat.  The larger central building was a school between 1702 until at least 1874 when the school in the village was built. 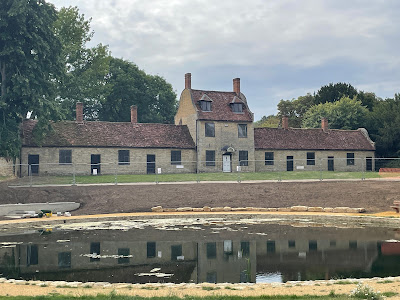 After lunch we went for a walk round the park.  There are a number of art installations around the park which reflect its previous life.  We didn’t find them all today but will look again tomorrow morning.  We did however see this which I can’t find any information on. 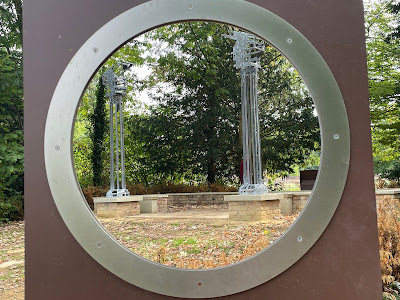 Great Linford Manor Park is a unique site in Milton Keynes with a history stretching back to at least the Saxon times. Many features of the park, for example the Water Gardens and nearby Wilderness Garden date from the 17th and 18th centuries when the park was laid out to provide the setting to the impressive Manor House.  The house that today dominates the grounds of Great Linford Manor Park was built at the same time as the school and almshouses by Sir William Prichard.

There was originally another manor house which was built in the 11th century though excavations in 1980 revealed evidence that it was extended and rebuilt substantially several times. 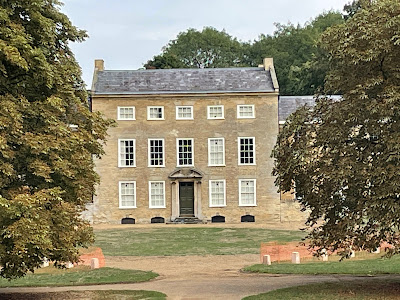 St. Andrew’s Church stands next to the almshouses.  The 12th century tower is the oldest part of the existing church, and every century since it has seen alterations and additions.  Considerable refurbishment works took place in the early 18th century including rebuilding of the chancel, south aisle and porch, the existing pulpit also dates from 1707.  A charter of 1151-54 mentions a chapel at Great Linford and excavations beneath the present nave suggest a late Saxon or very early Norman church with a simple nave and small chancel was once there.  The church has a full set of six bells which were installed in 1756.  I heard them ringing on Sunday. Sadly, the door was locked so I couldn’t go in. 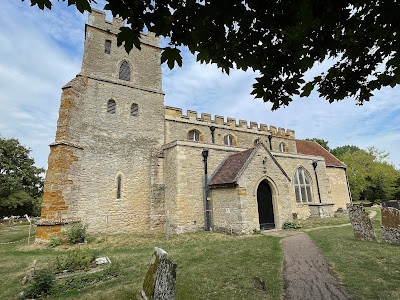 The first written reference to Great Linford is to be found in the Domesday Book of 1086, compiled on the orders of William the Conqueror; an earlier reported reference has since been found to be a mistake. The name was then spelt Linforde and may have been coined from the combination of a causeway or ford over the river Ouse near to some Lime (or Linden) trees.

A few more photos from today. 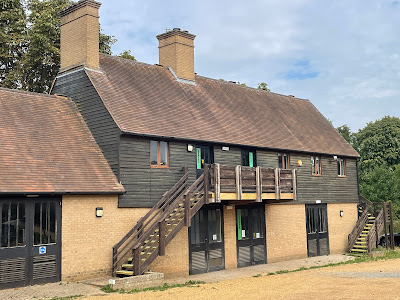 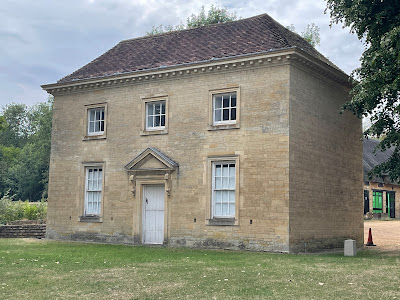 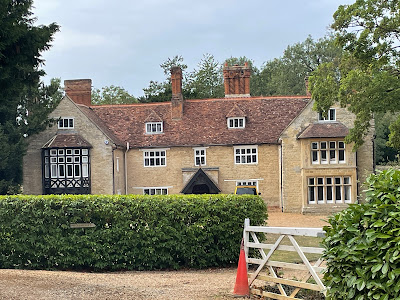 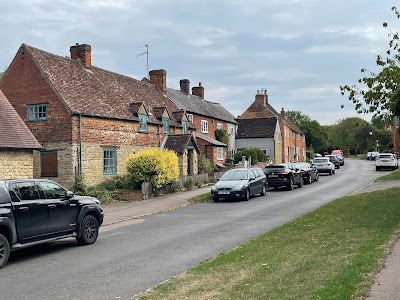 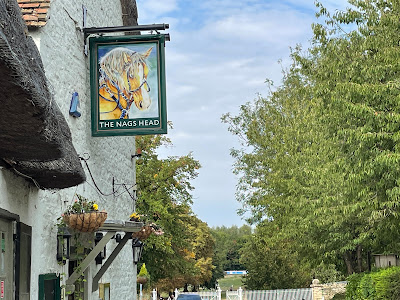 Can you see Mary H in the distance?

We walked round the park looking for the art installations.  There are six of them but we could only find five.

These are “The Sheep”.  These were created by artist Luke Chapman.  The sheep are situated where they would have grazed historically, alongside cattle, in Great Linford Manor's wider estate parkland. 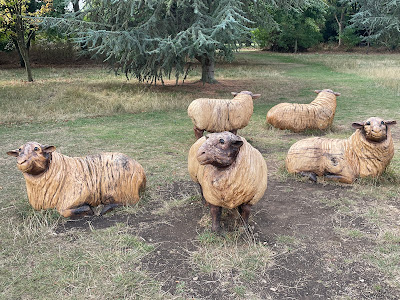 “The Horseshoes”. The early heritage of the canal, the Grand Union  was cut through Great Linford Manor estate in 1800, has been interpreted through 5 metal horseshoe sculptures, created by Arcangel. 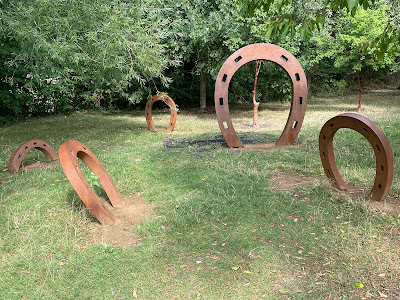 “The Snake” was created by Stony Stratford-based woodworker Ian Freemantle. 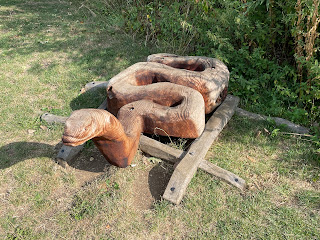 “The Fossils”.  Great Linford Manor Park is a local geological site, noted for its Blisworth limestone bedrock and the remains of a quarry that was used for stone to make the buildings in the park. Boulders that were removed from the quarry were arranged into the stone circle area that has been loved by Linford children for generations. The stones are also home to fossils from the Jurassic era, when Great Linford was a shallow tropical sea. 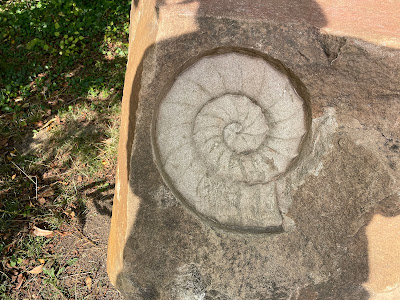 “The Seed Pods”  Nestled in the park's wildflower meadow, The Seed Pods were created by Stony Stratford-based woodworker Ian Freemantle. 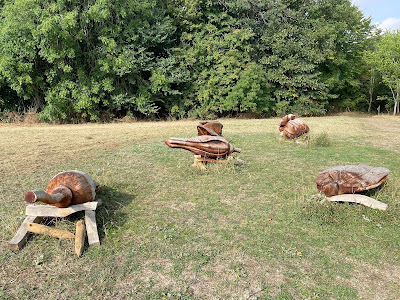 This is my favourite photo though.  Its face is amazing. 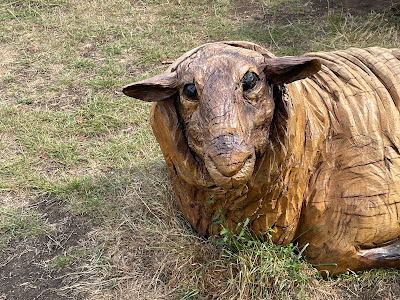 We left the lovely park and headed to Wolverton where we topped up the store cupboard at Tesco.  There are no shops handy for the canal for a while.  We moved onto to Cosgrove and moored below the lock.

You may remember me saying at the beginning of our trip that I was suffering with my back, well today it was very bad, and I couldn’t do much at all.  Fortunately, there were no locks to do so I sat in my captain’s chair as it seems to keep me upright.  I hope it will feel better tomorrow.

Posted by Linda Gifford-Hull at 11:55