It was pointed out to me yesterday, thank you Adam, that I had missed out the post for Tuesday.  Not sure how it happened, but here it is

We set off for Stoke Hammond lock and were just about to go in when another boat came round the corner to join us.  It was a hire boat with a good crew, and we were soon up and out the other side. 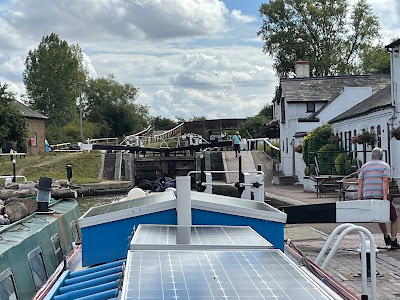 Passed the moored boats (I know I am getting boring now about the moored boats, but they are really very frustrating).  There was a boat moored on the lock landing at the Soulbury locks, but then the water tap is on the lock landing!  We pulled in front of him and a chap jumped out and asked if we could buddy up.  He was a single hander and to buddy up with him would mean we would lose the good crew from the hire boat, but of course we did the right thing!  Up through the first lock and we came to a halt as two lockies were helping an old working boat and butty down the locks.  The single hander and I had to move out of the lock and over to the side to let the working boat through.  After that one of the lockies helped us which meant we got up a bit quicker. 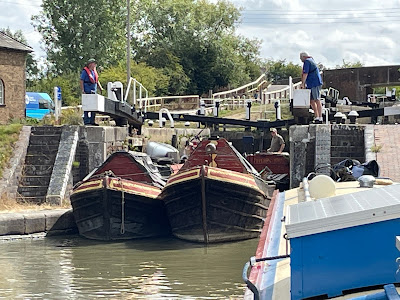 The Soulbury locks were known to working boatmen as the “Stoke Hammond Three” and became Grade II listed in 1984.

I found this titbit whilst researching the locks.  Not the most eerie of settings you might think, but boatmen of old insisted the locks were haunted by the ghost of a woman and her baby, and claimed that on still nights, you could hear the squeak of the pram wheels before she and her child disappeared into the murky waters of the canal!

We pulled over after bridge 109 for lunch, but it was a nice spot so that was as far as we got!

Posted by Linda Gifford-Hull at 11:34