I've missed another day out!  I have always blogged every day but thought I would try every second day, I don't think it works for me!

My back was a lot better this morning though I must take it easy.  I don’t know what started it off yesterday, but it could have been walking and then pushing the trolley round Tesco. 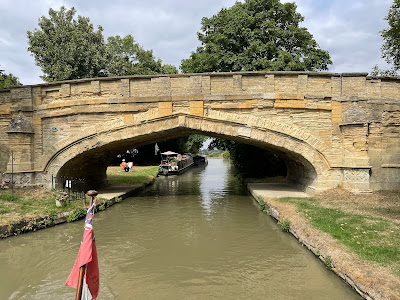 We went up Cosgrove Lock and under the Ornamental Bridge, number 65, which was built around 1790.  There are various local theories about why Cosgrove has one of the only two stone ornamental bridges on the Grand Union Canal. None of these is supported by documentary evidence. However, the Bridge is now a Grade II Listed Monument. 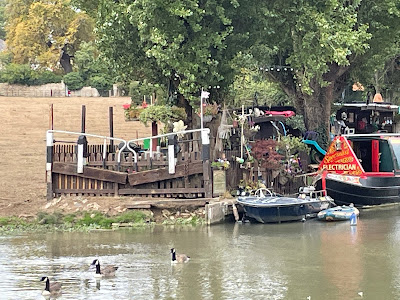 We pulled over at the services at the Stoke Bruerne bottom lock where there were two singlehanded boats already.  Another one came up behind us, also singlehanded.  Richard went to see if they were going up the flight only to find yes, they were and they had a shore crew of four people – result!!  We were first to go into the first lock and the second lock was ready for us too.  After that it was a little slower, but still extremely quick!  All four boats were stopping in the long pound between locks 15 and 16.

I rested my back during the afternoon and then went to the Navigation for dinner which wasn’t as good as last time.  We had garlic mushrooms to start with and the coating was so crispy it was very difficult to get a fork in – one of mine shot across the table!  However, they were very nice.  I then had a buttermilk chicken burger.  Sadly, the burger was overcooked, on the verge of being burnt and the fries were cold.  I didn’t mention the burger but told the waitress that the fries were cold.  She took them away and brought them back in a red hot dish, yes, she had put them in the microwave, and they were soggy.  The burger had two hash browns in, so I ate those and left the fries. 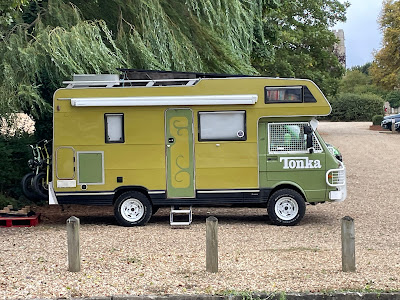 I just love this!

Back at the boat we watched Capture.  I think I understand what is going on, but Richard is really struggling with it!!

Posted by Linda Gifford-Hull at 17:28