A quiet night even though we were moored close to the railway.  The trains go by so quickly, unlike the ones in Canada which were 1 mile long goods trains and crawled along at some silly miles per hour and seemed to blow their hooters willy nilly!

We have passed a couple of Canaltime Club la Costa boats in the last couple of days.  The person who named them must have a good sense of humour.  They are Canaloni and Goldielocks!  I can just imagine the laughter that could have gone on in the office as they made the names up!

This passed us last night being towed and we found it again this morning.  I think its really sweet. 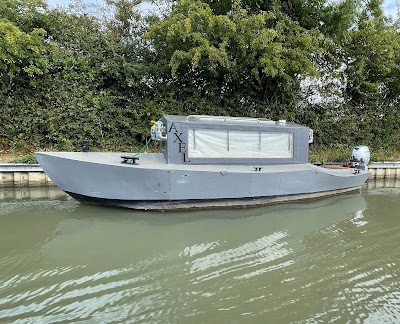 We moored up for lunch and didn’t move again.  We had good phone and internet signal, so I managed to catch up on all sorts of things. 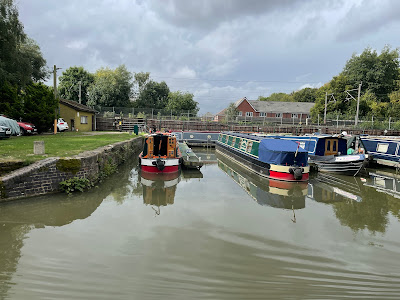 We passed the entrance to the old Ordnance Canal which is long gone.  An act of Parliament was passed in 1803 for the purchase of 53 acres in Weedon, ‘for erecting buildings thereon for the service of His Majesty’s Ordnance’; subsequent purchases later increased the estate to about 150 acres. The Royal Military Depot as it became known, stretched out along the Nene valley above the village of Lower Weedon, with a barracks for 500 men overlooking the depot to the north, close to the Coventry Road.  Initially the depot had eight storehouses and four magazines.

In order to move goods quickly into the depot, a canal cut from the Grand Junction Canal was constructed between two rows of storehouses. At each end of the main enclosure, two lodges were built over the canal, each equipped with a moveable portcullis. The canal cut continued into the magazine passing through a further smaller building and portcullis.  At the western end of the there was a fourth portcullis leading to a barge turning area outside the perimeter wall. Barges were also able to turn in a canal basin within the magazine enclosure, but this was infilled in 1915.

The magazines which were built at the same time as the depot consisting of brick buildings with very thick walls and a small high window at each end. Each block of buildings that was used to store gunpowder was separated from the next by a wide earth bank. Over 1000 tons of gunpowder was stored in the magazine at any one time.  Gunpowder was delivered to Weedon by barge, where it was packed into barrels and boxes and re-issued. The coming of the railway brought a standard gauge rail connection into the depot, but it also posed a problem as the new main line ran between the depot and the Grand Junction Canal, severing the branch canal into the depot. To overcome this, a portion of the line had to be bodily removed, fish plates, rails and chains; to allow the barges to pass into the depot. This was made more dangerous by the fact that this was one of the busiest stretches of line in England with hundreds of trains passing through at speed during the day and sharp curves leading away from it in both directions.

The seven locks of the Buckby flight awaited us this morning. My back is not getting any better and the thought of the locks was not nice. 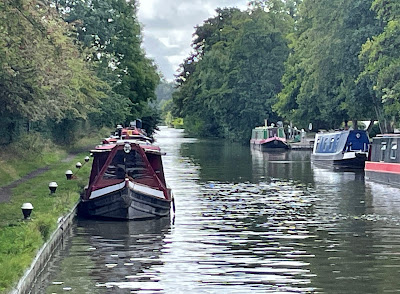 We got to the bottom of the flight and found a single hander to go up with.  He was a man of advancing years, and I thought that Richard would end up doing all the work.  But no, the chap was up the ladders in the lock like a rat up a drainpipe and pulled his full share of the work.  He told me that he had done the 17 locks on the Northampton Arm yesterday, all singlehanded though they are narrow locks.  I have heard real scare stories about how hard those locks are and I was in total admiration of the man.  The flight was busy with two boats ahead of us and two behind, but there were also boats coming down and each lock which made the whole thing much easier though not for my back ☹ 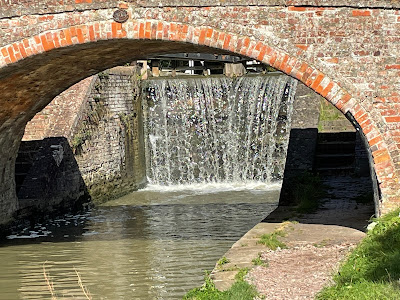 I had asked our single hander early on in the flight where he was going, and he said that he couldn’t decide.  He might continue up the GU to go to the Shroppie for the winter or maybe up the Leicester Line to spend the time in York and Ripon.  Before we parted I asked him if he had made his mind up yet and he said no, but he might go down to Braunston and then back up to the Leicester Line.  A glutton for punishment if you ask me!!

The Buckby or Whilton flight took us up 63 feet to 377 feet about sea level, now I bet you didn’t know that! 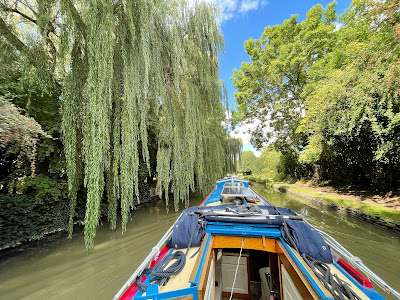 We emptied and filled at the services at Buckby Wharf.  We hadn’t had our lunch and the smell of chips coming from the New Inn beside the top lock was almost impossible to resist, but resist we did!  We moved on to just passed Norton Junction where we pulled over for the day.

We moored in a lovely place with a great view and at long last I got to see a sunset!  Because of our position at home, we don’t see sunsets so I always love seeing them. 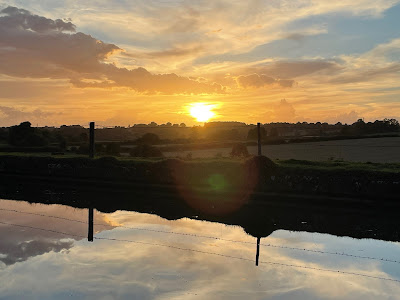 The old Roman road, Watling Street, now the A5, crosses the canal just below Buckby top lock.  Watling Street linked Dover and London, and continued northwest via St Albans to Wroxeter, a village 5 miles south-east of Shrewsbury. Viroconium Cornoviorum was the fourth largest city in Roman Britain.  There is a longstanding theory that a natural ford once crossed the Thames between Thorney Island, (present-day Westminster) and the Lambeth/Wandsworth boundary. Its location means that it is possible that Watling Street crossed it.  For those of you who have done the tidal Thames it is almost unbelievable to think that a ford could have been there!

Posted by Linda Gifford-Hull at 10:55