The first flood came on June 22nd when a month’s rain (more than 40mm) fell in 24 hours.  The flooding was caused mainly by the amount of water coming off the hills as they were saturated with five or six weeks of constant rain.  It poured down the rivers, becks and roads, even taking the tarmac off in places. 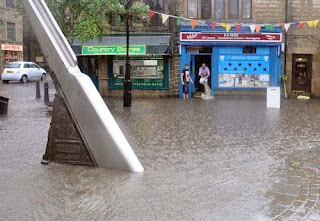 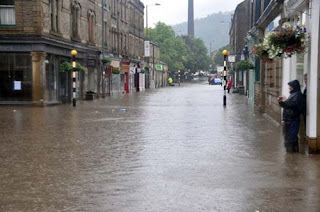 The second flood came 19 days after the first.  This time, it wasn't the rivers, but drains that were overwhelmed.  Water fell down off the hillside through every valley, track, and hole in wall, much of it gathering in the centre of Hebden Bridge. 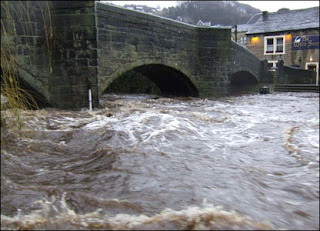 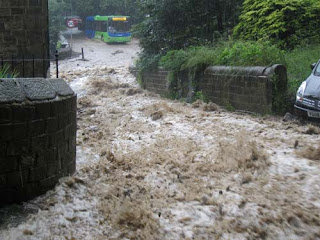 The most serious problem for boaters was a boat blocking the canal. As river levels rose rapidly, a torrent of water flooded onto the canal below Lock 12. A section of towpath was ripped up by the water and a moored boat was torn from its mooring pins and carried half a mile down the canal. The boat was then swept onto an overspill weir and was left stranded across the canal, with its bow resting on the overspill weir and its stern embedded in the opposite bank. Fortunately there was no-one on board the boat at the time. 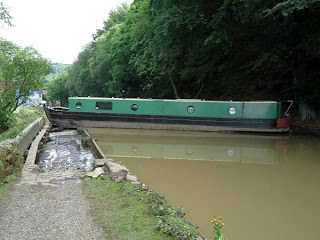 Wandering round Hebden Bridge this afternoon you wouldn’t really know that the town had been overwhelmed by water 12 months ago.  There are no signs of water levels on buildings and everywhere is smart and clean.  The town is lovely – I can see why people come to visit it.


Here are a few photos I took this afternoon 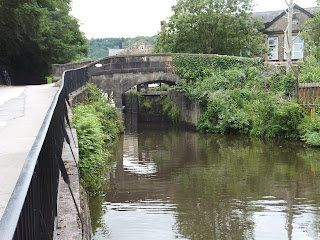 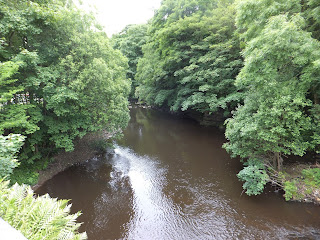 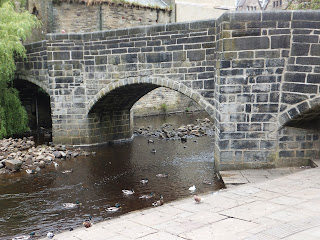 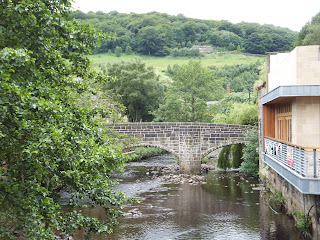 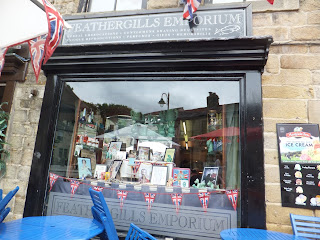 According to Hebdenbridgeweb by the end of the sixties, the town was in bad shape. Shops were empty and blocks of terraced houses were being pulled down.   During the seventies and eighties the town was repopulated by a motley mixture of artists, writers, photographers, musicians, alternative practitioners, teachers, green and New Age activists and more recently, wealthier yuppy types. The area has a rich literary history. The Bronte sisters wrote their famous novels just a few miles away in Haworth, the American poet, Sylvia Plath is buried at Heptonstall on the hill overlooking Hebden Bridge and the poet laureate, Ted Hughes was born in Mytholmroyd, two miles away.  Hebden Bridge was an obvious destination for those wanting to escape the cities because life here can be a fine mixture of the urban and rural. The water from the hills powered the first mills of the Industrial Revolution. Yet, ten minutes from the town centre and you can be walking alone by the river in one of the many wooded valleys.  A half an hour's walk uphill and you can be rambling across heather moorland.


Hebden Bridge is a popular place to live. However space is limited due to the steep valleys and lack of flat land. In the past this led to "upstairs-downstairs" houses known as over and under dwellings. These were houses built in terraces with 4–5 storeys. The upper storeys face uphill while the lower ones face downhill with their back wall against the hillside. The bottom 2 storeys would be one house while the upper 2–3 storeys would be another. This also led to unusual legal arrangements such as the "flying freehold", where the shared floor/ceiling is wholly owned by the underdwelling. 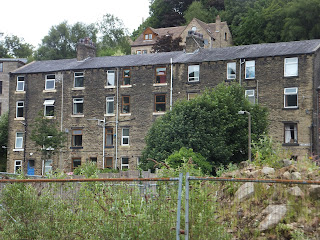 One final fact about Hebden Bridge, in April 2005 it was declared the 4th quirkiest place in the world by highlife (the British Airways flight magazine) and was described as "modern and stylish in an unconventional and stylish way".
Posted by Linda Gifford-Hull at 09:29