The river seemed to be busy today with queues at the locks.  At Bishop’s Meadow Lock we were filling up with water when we met the most adorable dog!!  He is a Lassapoo and has the most gorgeous face and looks a bit like a feather duster!!  However I’m not sure I would want to deal with that coat!


We went into Loughborough Basin as we wanted to go and visit the Carillon.  Ian and Karen on Tacet had been a month or so ago and had whetted my appetite!  But first things first – a quick trip to Sainsburys to get some lunch and then we were off to Queen’s Park.  From the basin it is only a half mile walk and we were soon at the tower.  The Carillon Tower was built as a War Memorial by public subscription in memory of the 480 men of the town who fell in the Great War.  The tower is 152 feet high and was completed in 1923 and was the first grand carillon in England, the concept being associated with Belgium where so many British servicemen lost their lives during the 1914–1918 Great War. The Carillon was designed by Sir Walter Tapper, and is now grade II listed.  There are 47 bells, all of which were cast at John Taylor Bell Foundry in Loughborough. Elgar composed Carillon Chimes for the occasion; the manuscript, donated to Charnwood Borough Council in the 1950s, was rediscovered in 2012.  Recitals are played every Thursday at 13:00 throughout the year and on Sundays and Bank Holidays at 15:30 from Easter to the end of September and as it was a Sunday we were passing through Loughborough we were lucky.  For those of you who don’t know a carillon is played by striking a keyboard — the stick-like keys of which are sometimes called batons — with the fists, and by pressing the keys of a pedal keyboard with the feet. The keys mechanically activate levers and wires that connect to metal clappers that strike the inside of the bells, allowing the performer on the bells, or carillonneur, to vary the intensity of the note according to the force applied to the key.


In Queen’s Park there are three sculptures which were commissioned to go alongside the bell casing of Great Paul which had lain rusting in the yard of Taylor’s Bell Foundry.  Great Paul is the largest bell in the British Isles, which weighs 16½ tons and hangs in St. Paul’s Cathedral.  The bell was started on November 23rd 1881 and six days later it had cooled sufficiently to take it out of the case.  Two stream traction engines hauled a very strongly built trailer with the bell on it all the way from Loughborough to London.

We returned to Mary H and then set off towards Barrow-on-Soar.  Coming out of Loughborough is a bit like any other town but once we were out we were back in the lovely countryside again and with the sun shining it was pretty near perfect :-)  As we approached Barrow we could hear music and as we rounded the bend we came across a lorry being used as a stage and a group playing.  It was rather loud but there were all ages sitting round listening.  We went through Barrow lock and moored up hoping to go to the Navigation Inn for a meal but with it being Sunday their kitchen closed at 4pm so Richard boldly offered to cook gammon, egg and chips and scrummy it was too! 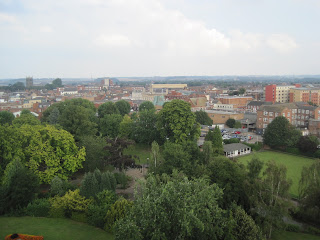 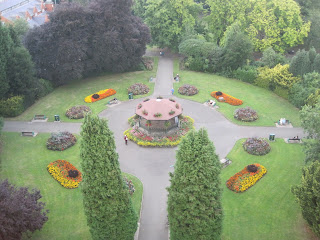 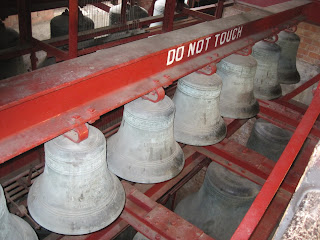 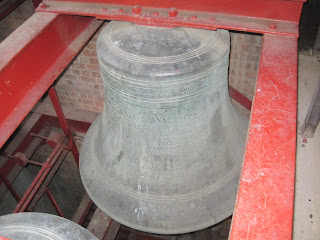