We said goodbye to Mike this morning.  He is expecting friends to join him for the day however as he is moored in Barby I’m sure we will see him again soon.


Before we set off I wandered down to a boat selling wooden hand carved mushrooms.  I had seen them yesterday and really coveted one.  It took a lot of decision and eventually it became a committee decision and we settled on one with a hedgehog on!  The idea is to take him home but he looks really nice on the boat – so who knows where he will end up. 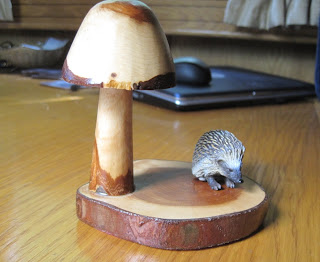 We set off southwards towards the Welford Arm, there was a fair amount of traffic on the canal – I bet Foxton was busy today.  We turned into the Welford Arm and continued along to the lock and locked both boats through.  We moored up just round the corner and walked to the Navigation Inn for a very nice late Sunday lunch.
The basin at Welford was quite a surprise bearing in mind that the arm is so small.  There are two small marinas, a boat yard and services.


The Welford Arm was dug to feed water to the Leicester Line but a certain amount of trade developed and coal was still being brought to Welford at the end of WWII.  It then fell into decay and it re-opened in 1969.  The pound above the lock is the highest pound on the Grand Union system.
Richard and I decided to move down into the basin to avail ourselves of the services and headed back towards Ferndale however we were hailed by the crew of Hakuna Matata who we had gone down the Anderton Boat Lift with back in June.  We had a brief chat and then caught up with Ferndale and moved back down to the Leicester Line and moored up just beyond the junction.

Posted by Linda Gifford-Hull at 09:49