Tuesday - it was sad this morning as Maggie and Richard were leaving.  Victoria came for breakfast and then we packed up her car and the three of them were soon on their way to Heathrow where M & R will pick up a hire car for 24 hours before flying back to Florida tomorrow.  It has been great having them here.  It has been wonderful for me as Richard II has done all the cooking and most of the washing up.  Also I’ve hardly had to do a lock!

However there was some good news as Richard managed to get the washing machine going :-)  Even though he had checked the fuse Jim suggested that he change it and lo and behold the washing machine sprung into life!  Very strange!  It was a nice day so I got all the bedding washed and dried outside.  We took Muffin for a walk to the river and then I explored Lidl – it is good value in there I have to say.

Wednesday – we decided to celebrate our anniversary today and took ourselves off to visit the Severn Valley Railway.  We drove to Bewdley and caught a diesel train to Highley where we got off and went to The Ship Inn for lunch.  It was rather a rush to eat our baguette before climbing back up the hill to catch the steam train into Bridgenorth.  I love steam trains and sadly I remember them from when I was a child!

Once we arrived in Bridgnorth we climbed up to Upper Town and through the castle grounds. The castle was founded in 1101 by Robert de Belleme. Its principal feature, a square great tower, was built during the reign of Henry II.  During the Civil War, Bridgnorth was one of the Midlands' main Royalist strongholds and in 1642 many Royalist troops were garrisoned there. In 1646, Cromwell’s Roundheads arrived with orders to take Bridgnorth for the Parliamentarians from the garrison led by Sir Robert Howard.  Following a three-week siege, Cromwell was successful and he ordered that the castle be demolished. By 1647 little of the structure remained.  The Parliamentarians left it much as it is today, the stone from the castle being taken and used to repair the town's damaged buildings. Parts of the great tower still remain, but because of the damage caused during the Civil War, it now leans at an angle of 15 degrees, 4 times the lean of the leaning tower of Pisa.  The grounds are very well tended and the roses should be wonderful when they bloom.

From the castle grounds we walked into the town.  The earliest historical reference to the town is in 895 though the town itself was not created until 1101.  Two interesting buildings in the town are the seventeenth century Bridgnorth Town Hall, a half-timbered building, and a surviving town gate the Northgate which now houses a Museum.  We found a little alley with a café so had a cuppa with a piece of cake (between us!)

We then found the funicular which is not only the steepest (33 degrees) and shortest (201 feet) but is the only functional inland funicular railway in England.  It was opened in 1892.  We had to buy a return ticket so went down to look at the river then back up so that we could walk back down to the station – strange people aren’t we?? 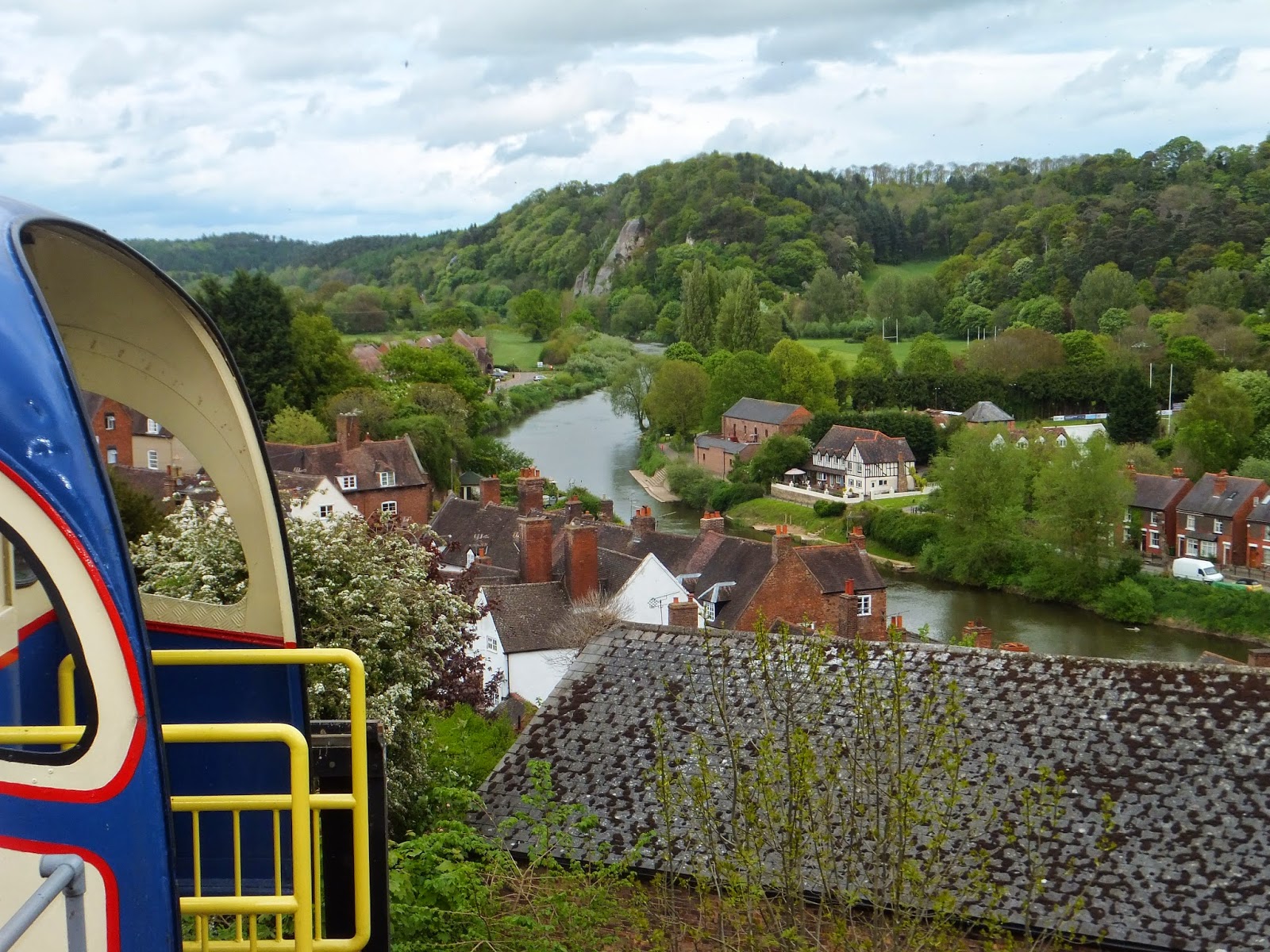 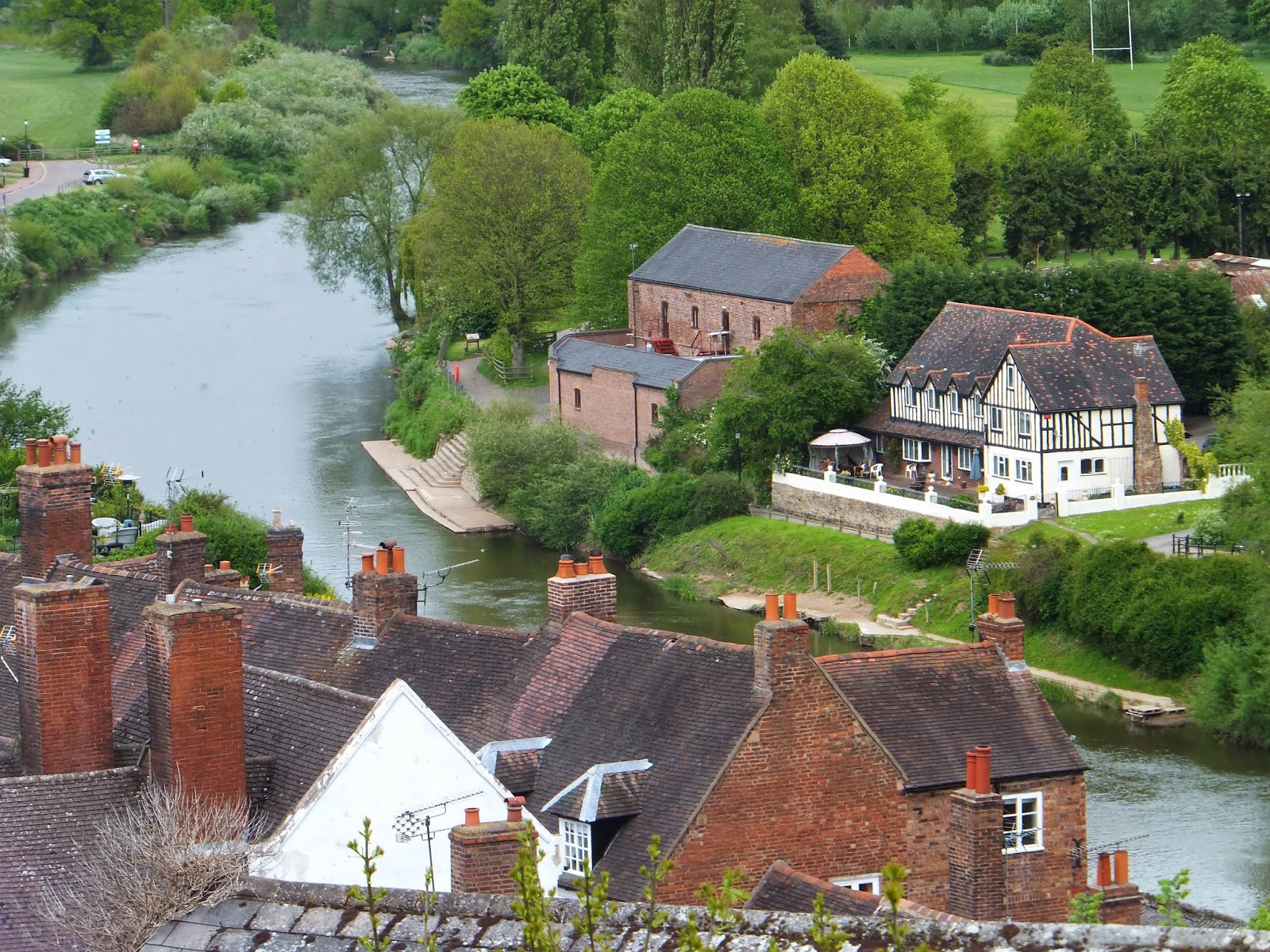 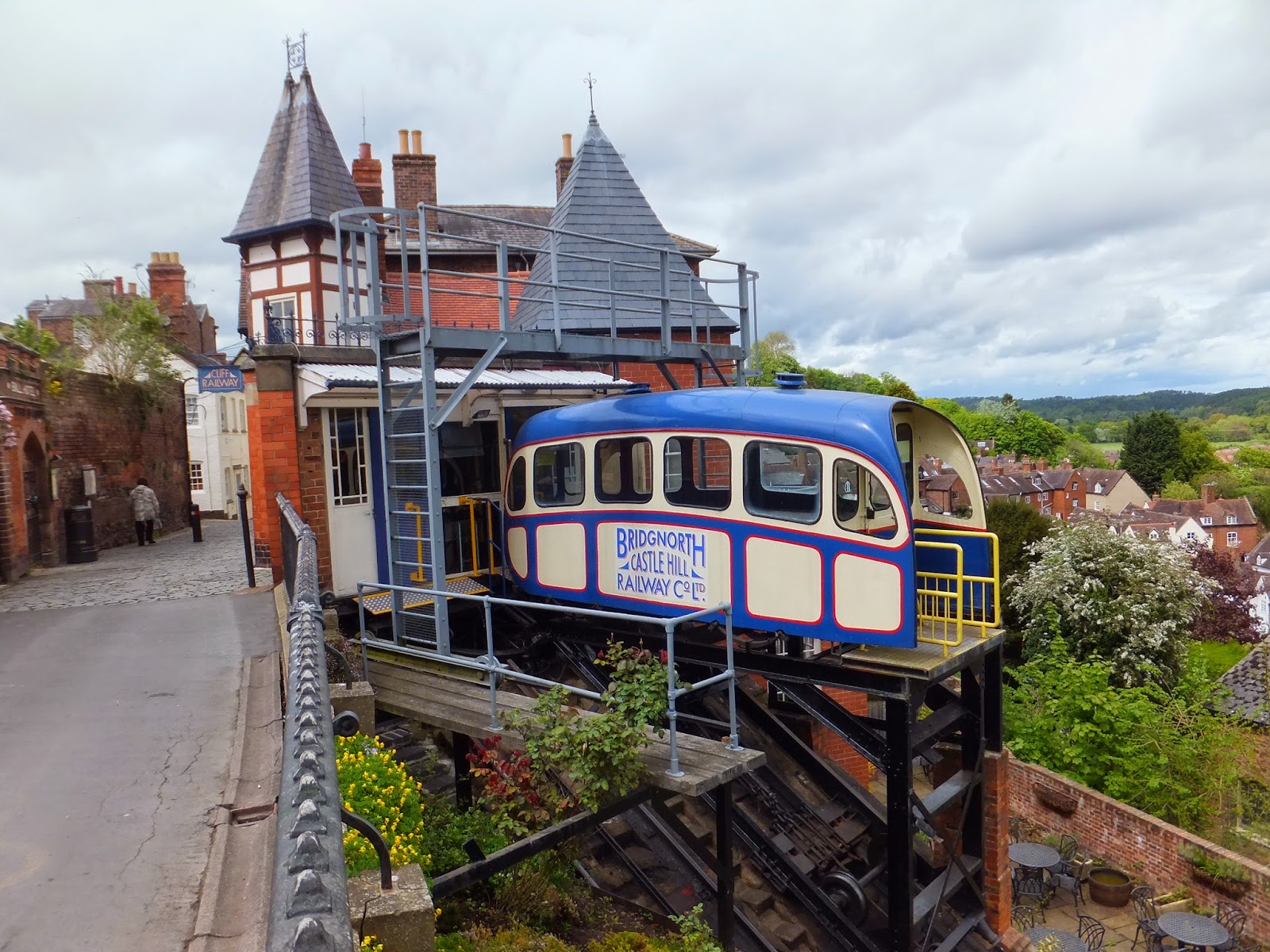 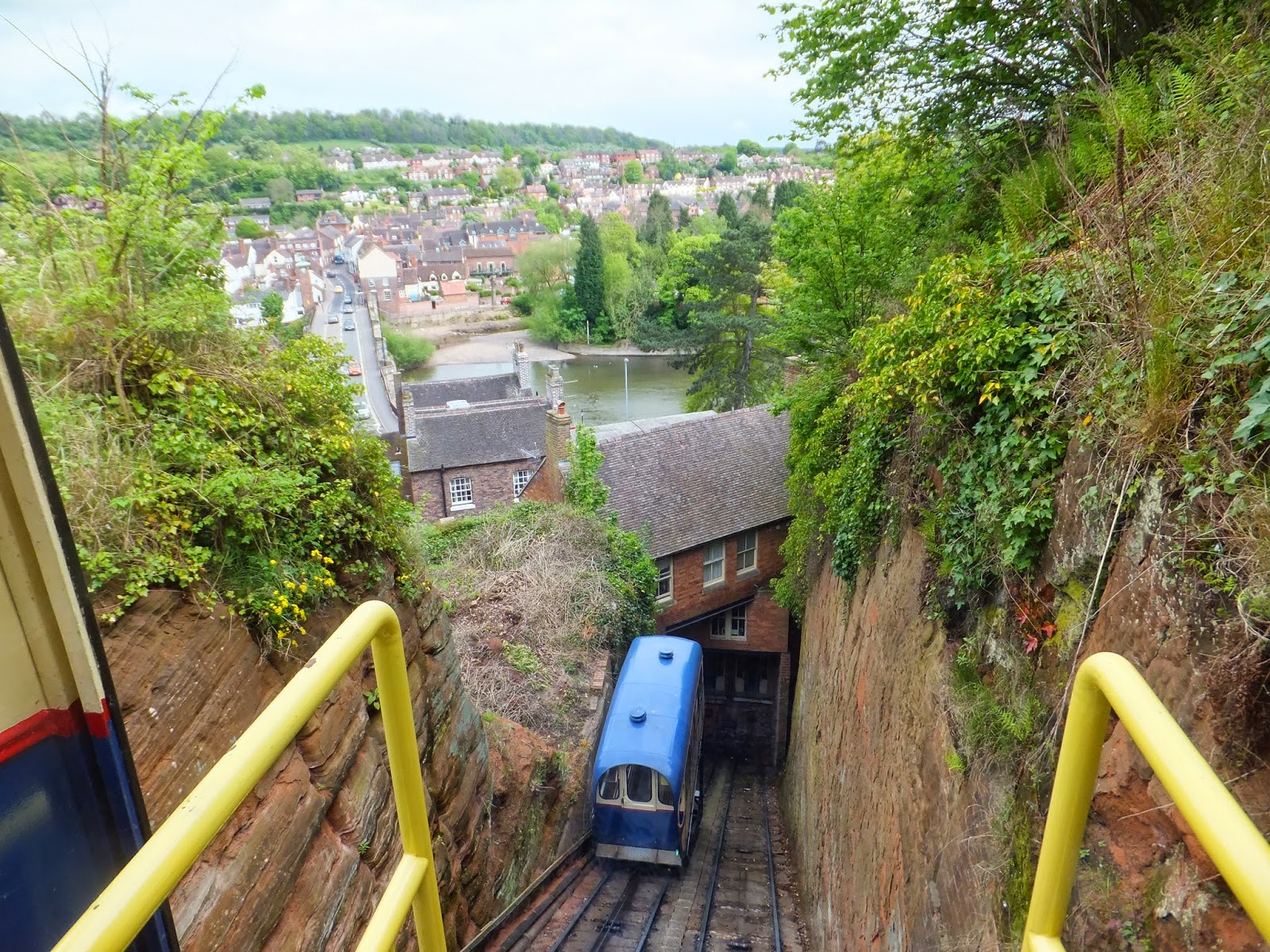 We had intended on catching the 3.20 diesel train but it was cancelled so had to wait for the 4.30 steam train which was even better.  Richard decided that we would go back First Class which was great – we were even served a cup of tea but not in china cups!  Muffin made himself quite at home on a jacket on his First Class seat and slept nearly the whole way. 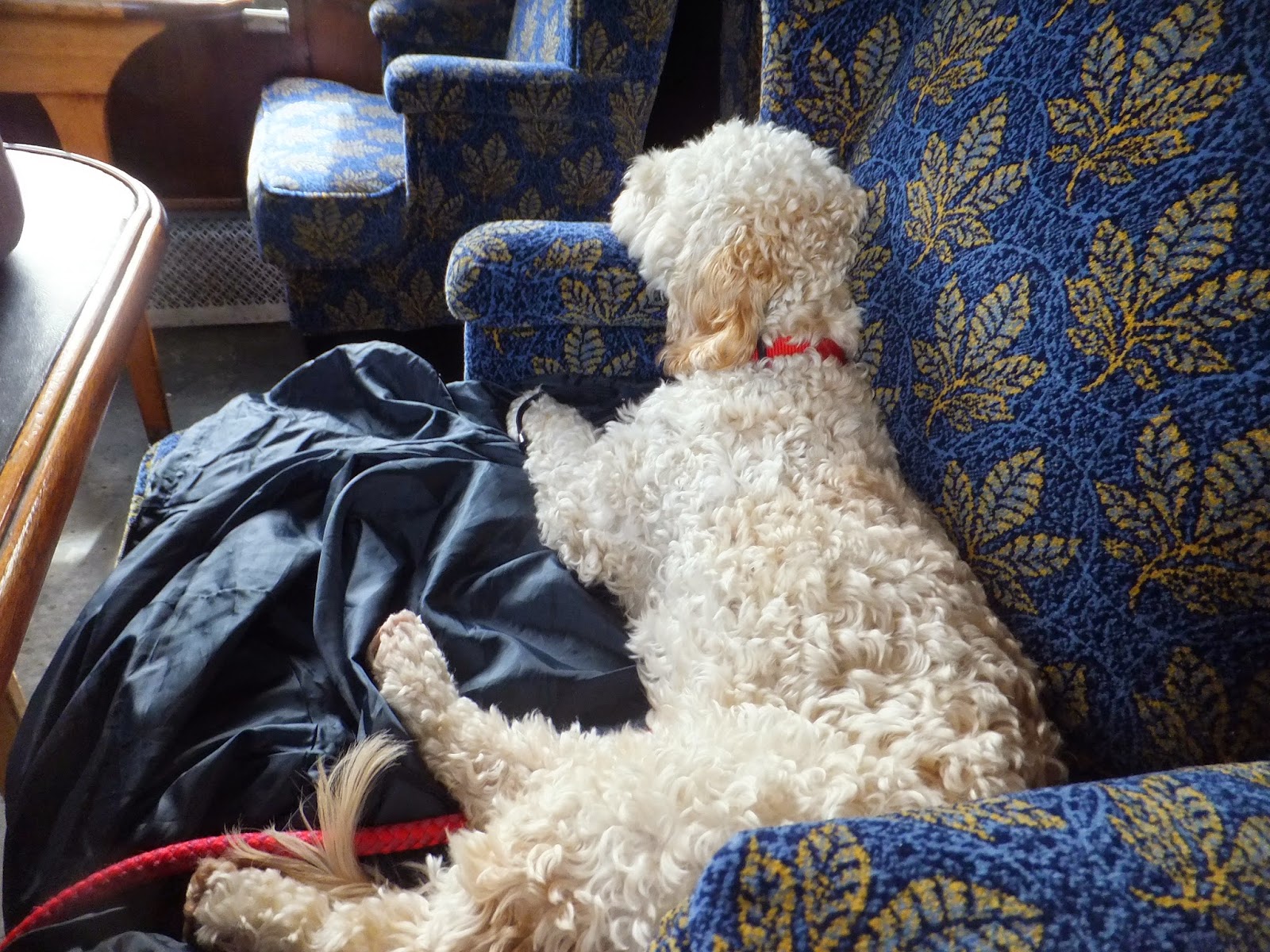 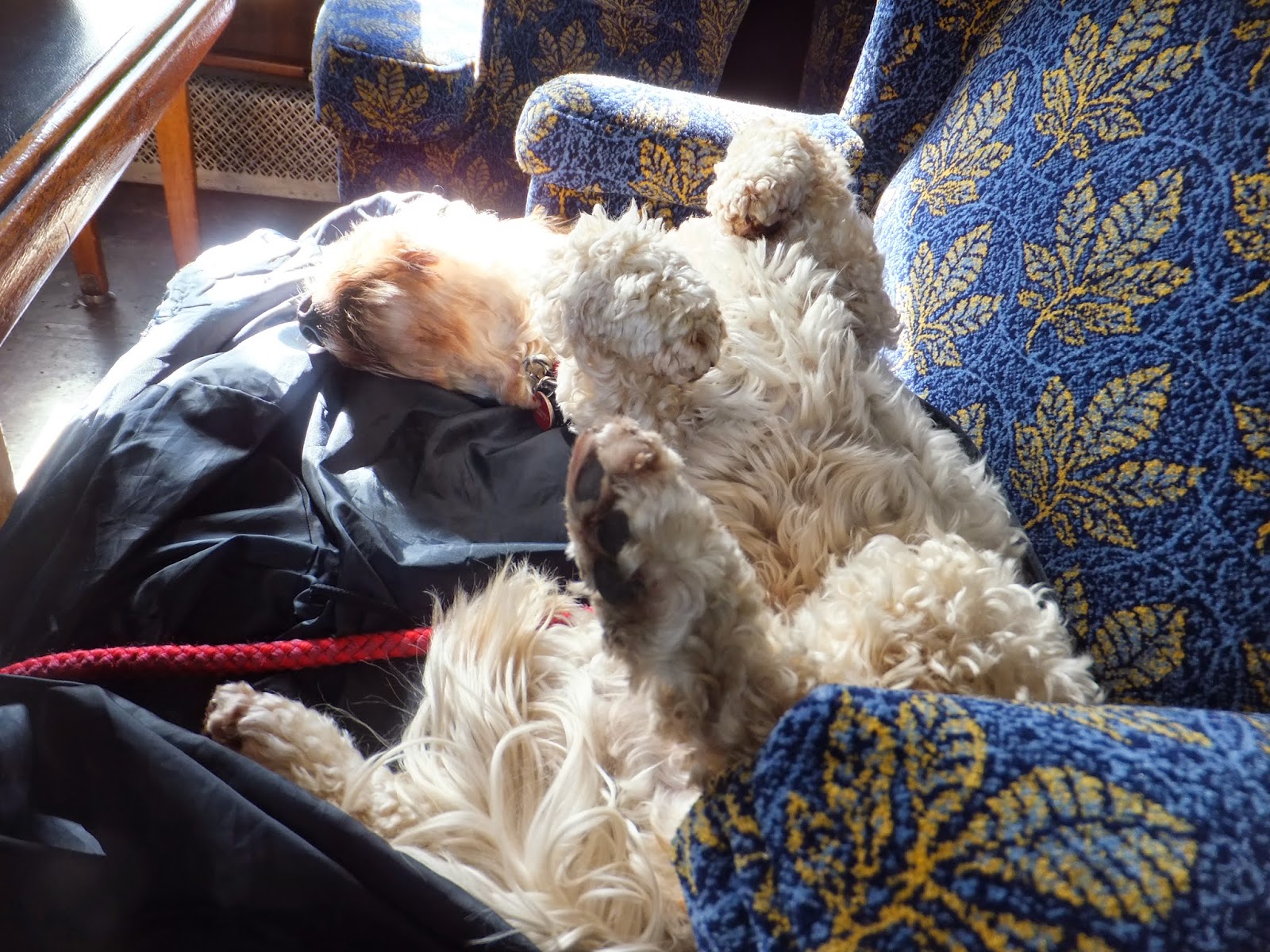 In the evening we went to the Thai Emerald in Evesham – it was our fourth visit over the years and is still one of our favourite Thai restaurants.
Posted by Linda Gifford-Hull at 14:42