The alarm went off at 7am and Richard bounced out of bed – not like yesterday!  He was itching to go and was having breakfast at some unearthly hour.  I was much more laid back though my tummy was churning a bit!  Everything that had to be moved was moved – the shower looks like a market garden!  We pulled away from our mooring spot at 8.20am for our lock out at 9.00am – of course we were far too early and had to sit and wait for ages for the first bridge to be opened.  Gradually the bridge swung and we got our first proper view of Sharpness Docks – hmmm no comment!  We were soon in the lock where we met our pilot, Bill.  It was all slightly chaotic as even though we had had so much time waiting for the bridge we still hadn’t got our life jackets on or the anchor out.

Out of the lock and into the Severn Estuary.  As we past the wooden spit the water was rushing over it and it made me realise how dangerous the tide in the Severn can be.  Our first view of the estuary was lovely but we seemed to be in the middle of a big sea!  Richard and I are sea sailors as well as canal boaters so it wasn’t frightening but the vessel we were in was rather different!   Muffin and I settled down in the cratch to check we weren’t going to hit anything!

The first part of the trip was, I have to say, rather boring but once we approached the bridges it all changed.  To see the huge upper bridge (Severn Bridge) looming in front of us was amazing.  At first the lorries going over were rather like pieces of Lego and they gradually got bigger and bigger. 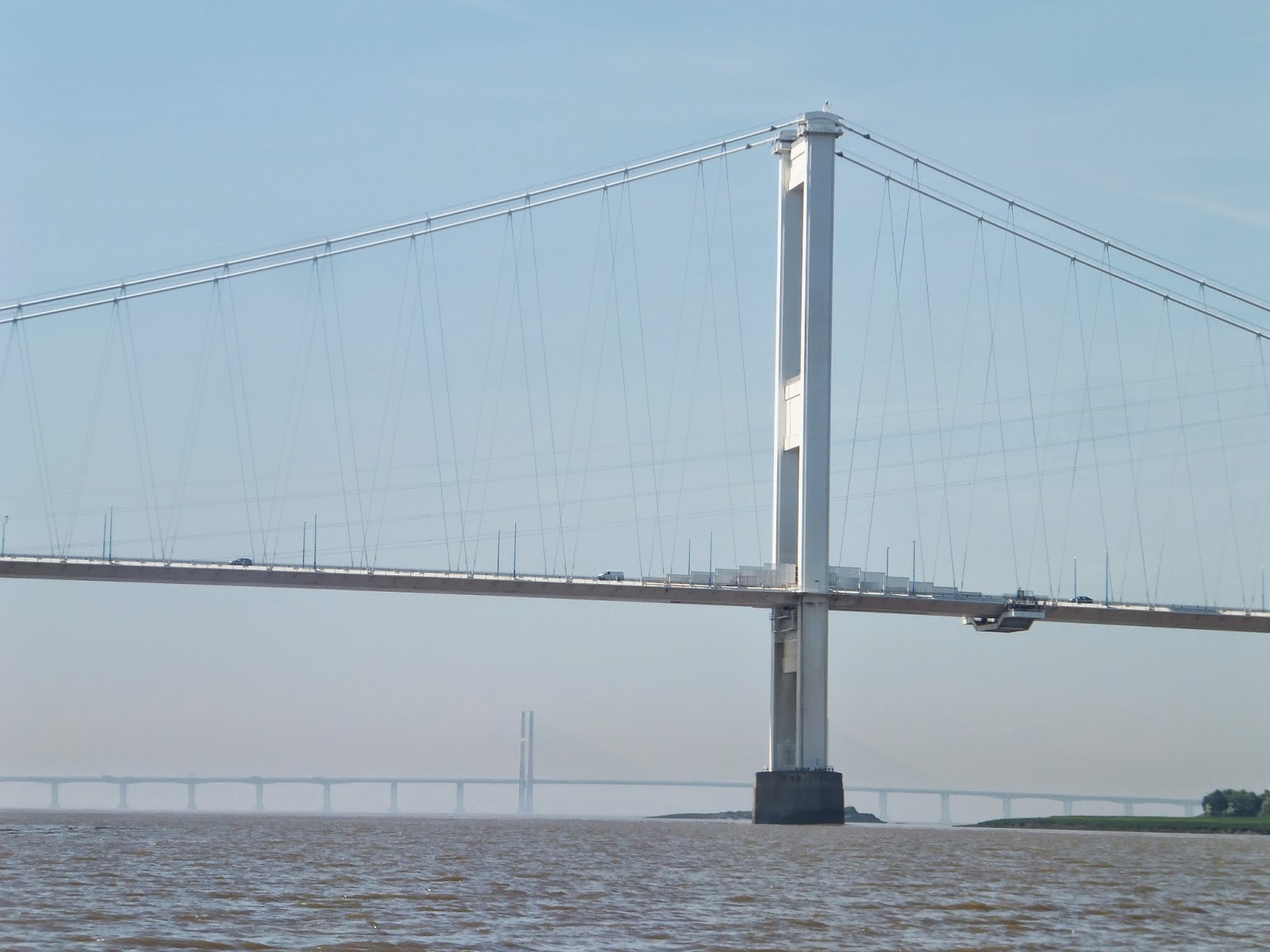 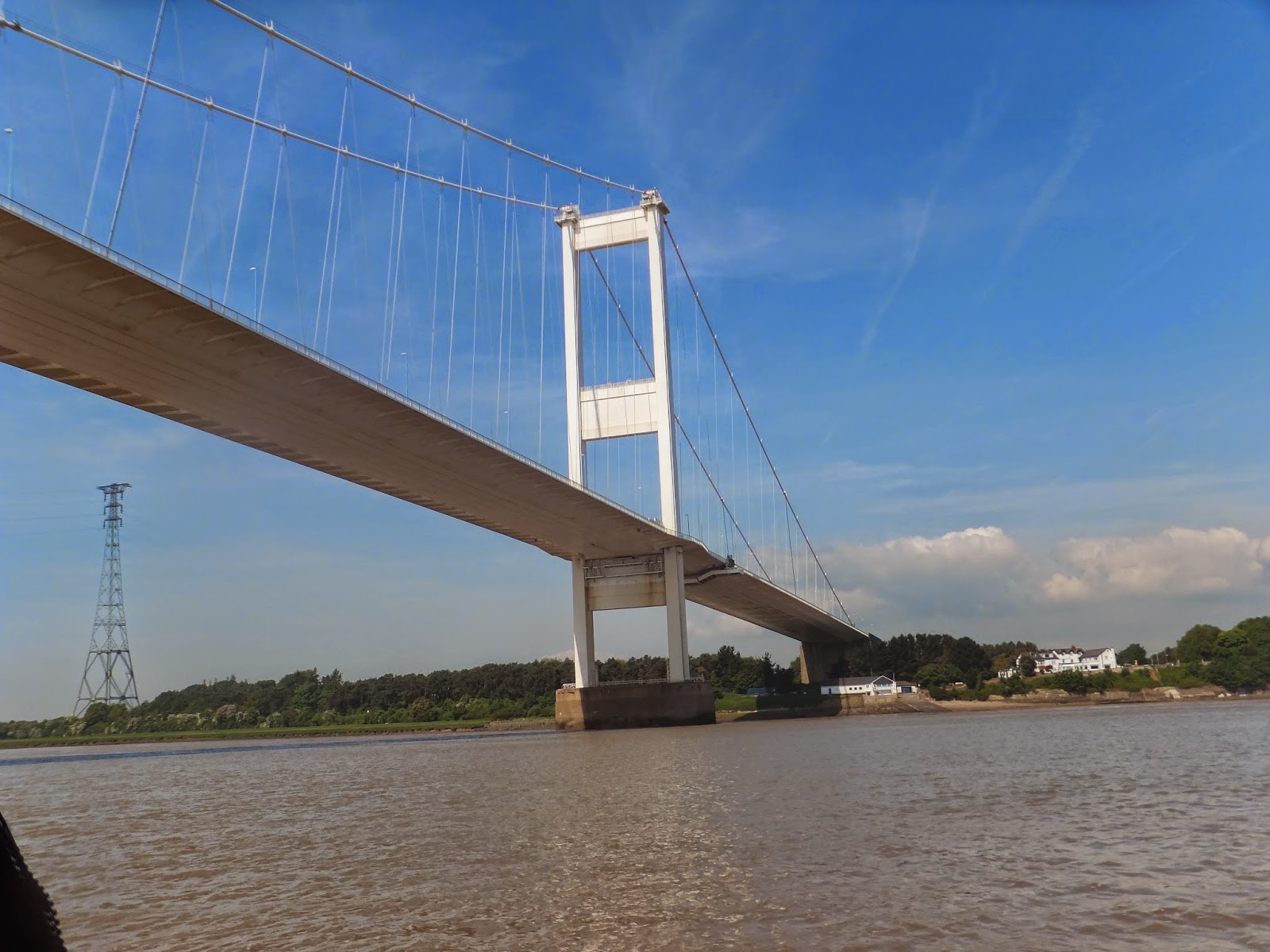 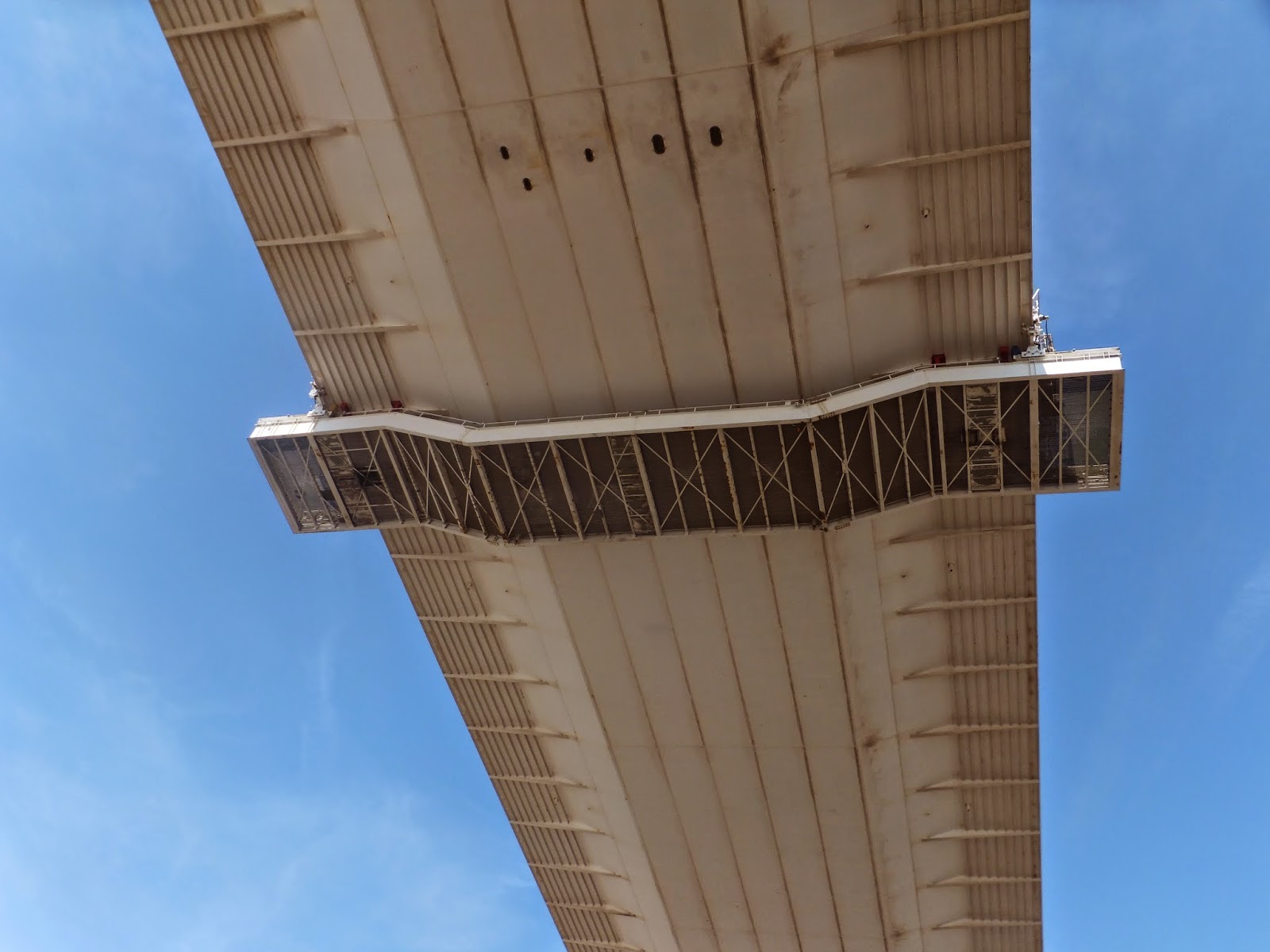 Once we were on the other side we appeared to be going through whirlpools but Bill said that it was the tide going out over rocks and uneven surfaces on the bottom.

The lower bridge (Second Severn Crossing) hove into view and, in my opinion, is more spectacular.  There is a 25 span viaduct on the English side of 6,900 feet/1.307 miles, a 24 span viaduct of 6,814 feet/1.291 miles on the Welsh side and the bridge itself is a 3,110 feet/0.589 mile structure giving a total of 16,824 feet/3.186 miles.  The central section, called the Shoots Bridge, is of cable-stayed design and the central span (between the bridge pylons) is 1,496 feet in length.  Work on the new crossing began in 1992 and was completed in 1996.  The path taken by the bridge is close to that of the Severn Tunnel which has carried the railway line beneath the river bed since 1886. 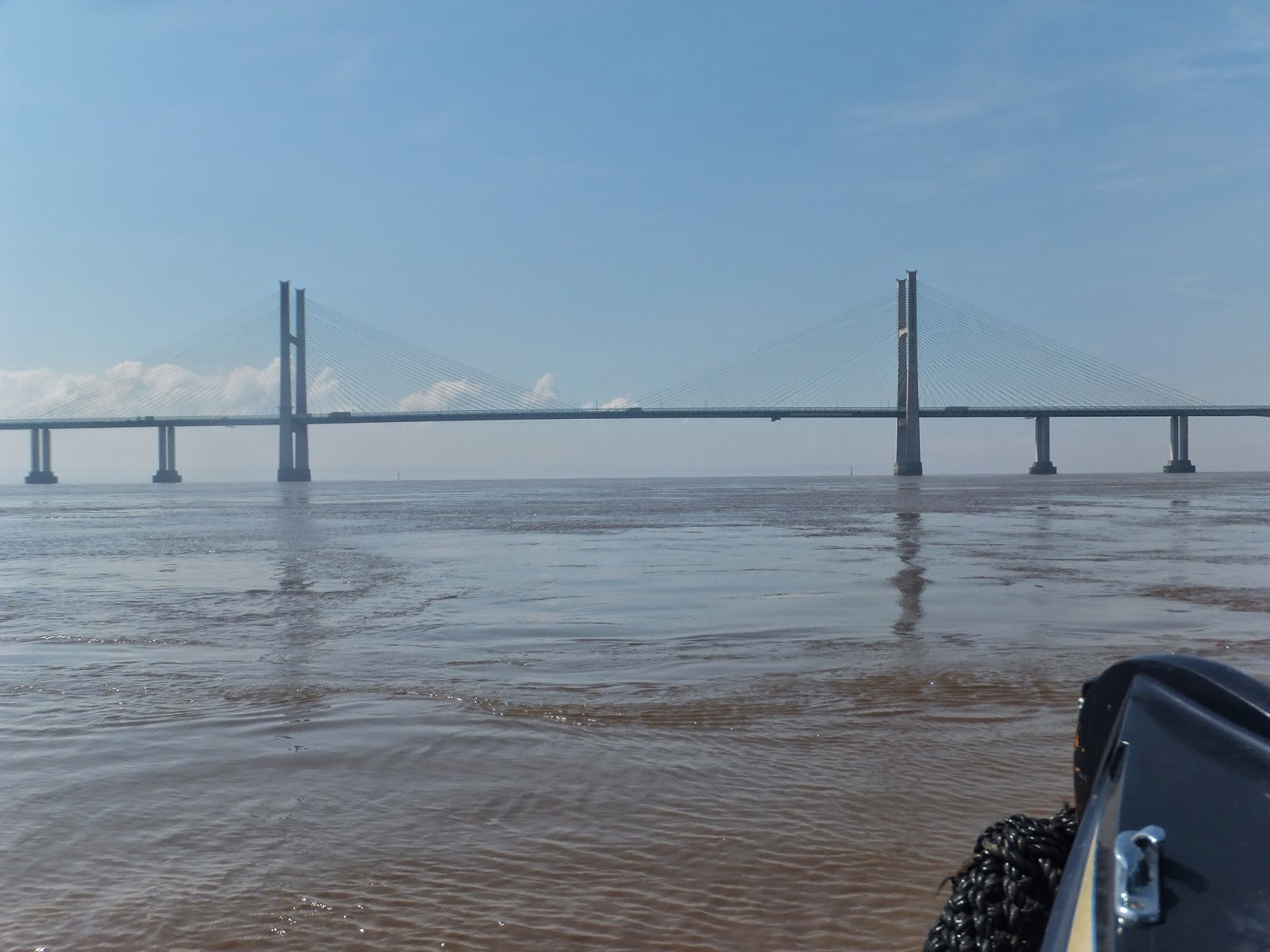 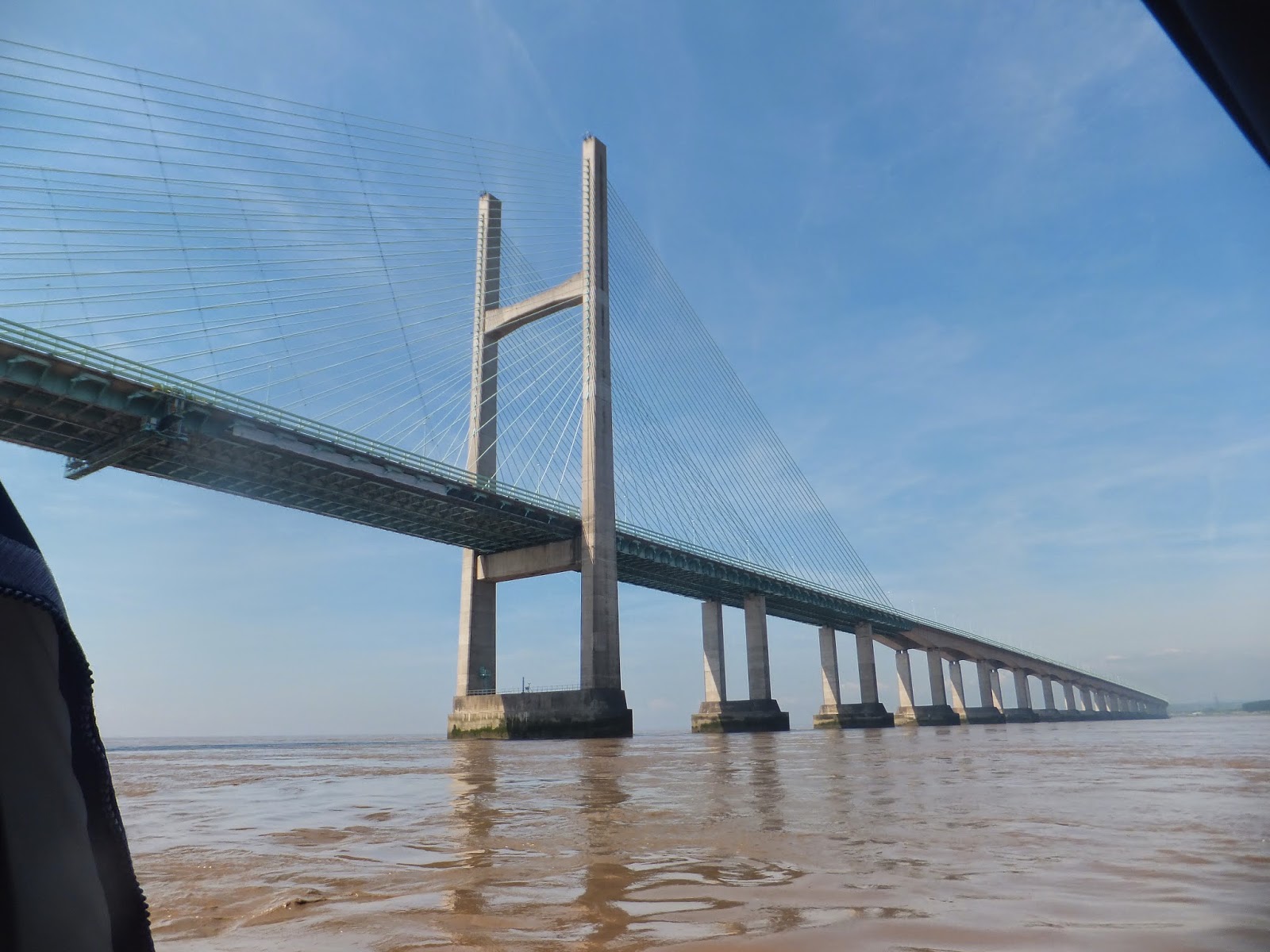 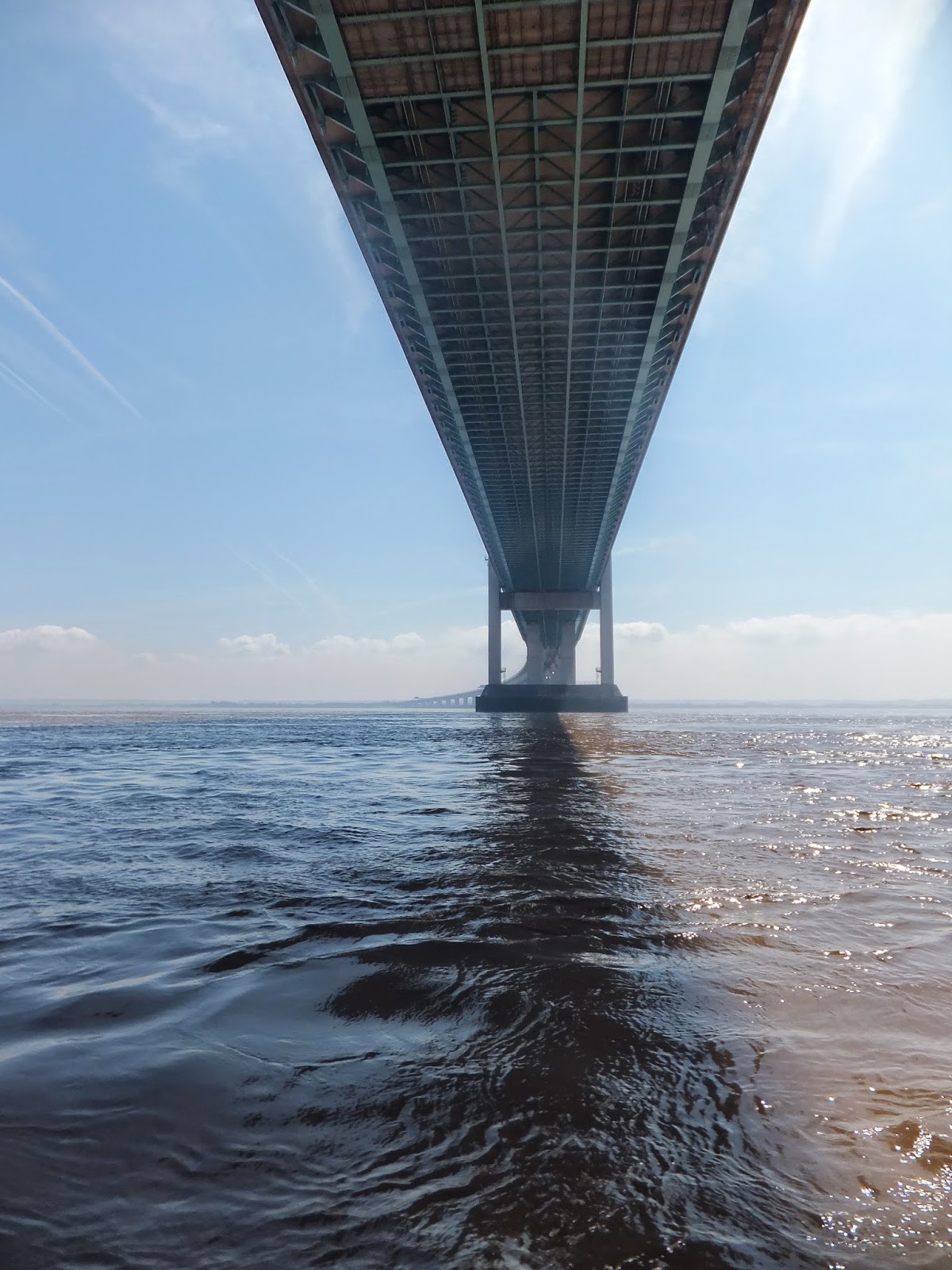 Muffin and I started to get a bit cold at this stage and both had to have jumpers!  Meanwhile the pilot was in shirt sleeves.

The next excitement was Avonmouth Docks – well not really we just went past and into Portishead Marina where we parted company with Bill.  The lock is huge and some narrowboaters may moan about water gushing into locks but I bet you ain’t seen anything like this before!


We took a turn round the marina and felt very out of place!  Still we had a very nice hammerhead mooring and close to the lock. 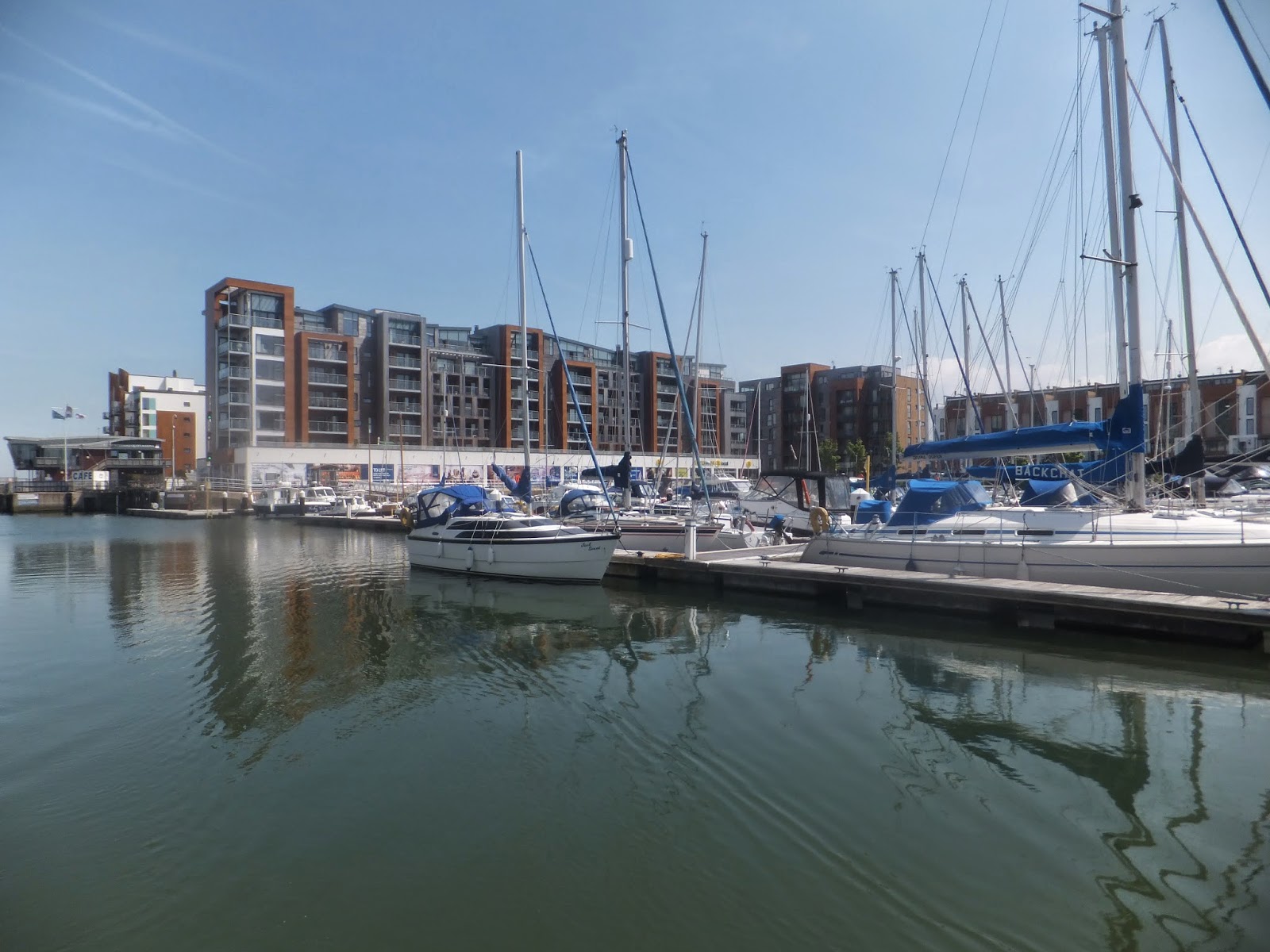 After lunch we took the bus into Bristol as we wanted to buy a hand held VHF radio.  The bus service is very efficient and Force 4 was about a 20 minute walk from the bus stop in Hotwells.  However the walk made my ankle hurt so we took the ferry back across to Hotwells and caught the bus back.  In the evening we went to the new pub in the Marina called H & W.  It is made out of old shipping containers and looks very smart.  It was heaving but we managed to get a table outside and had a very nice meal. 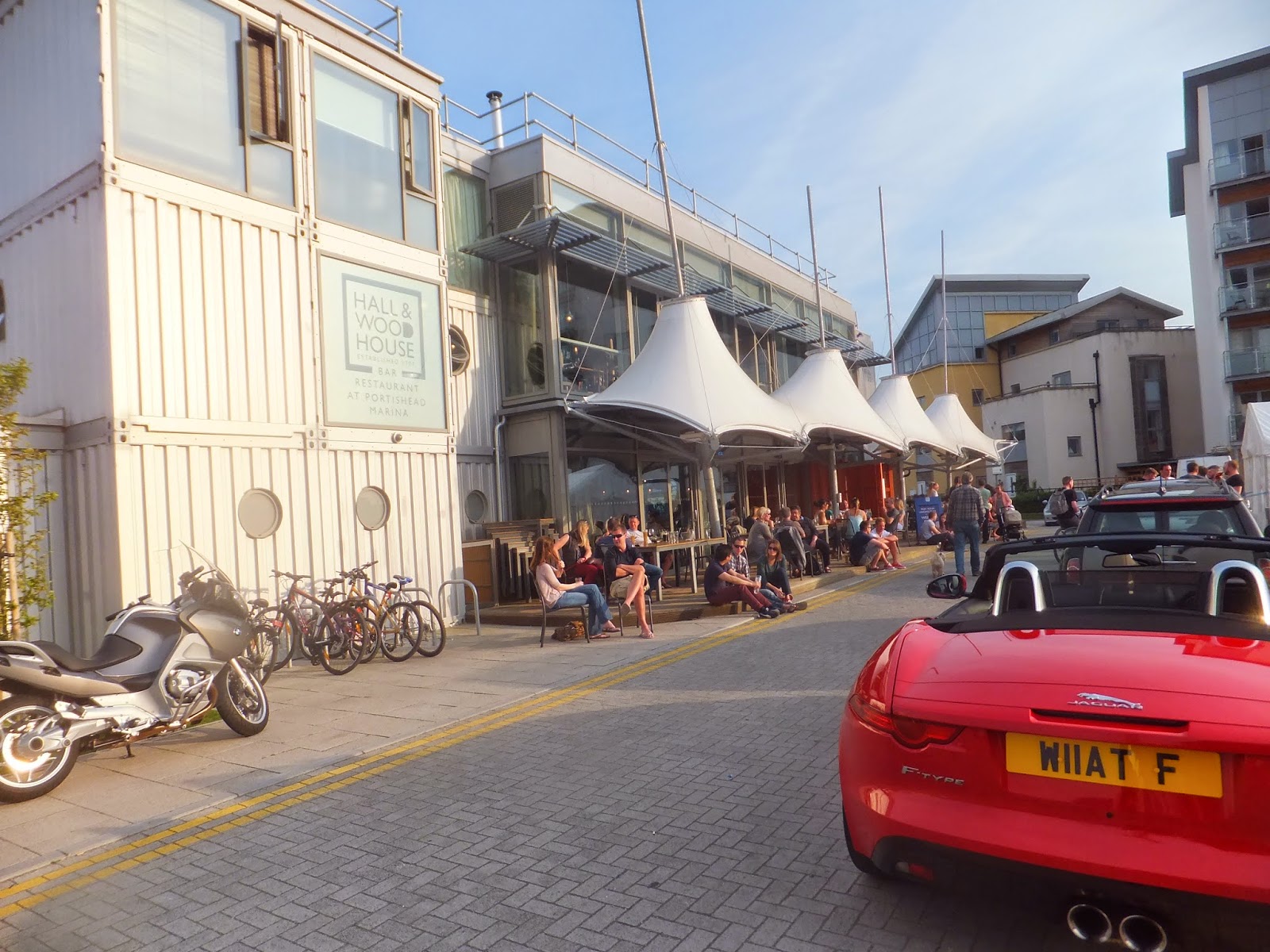 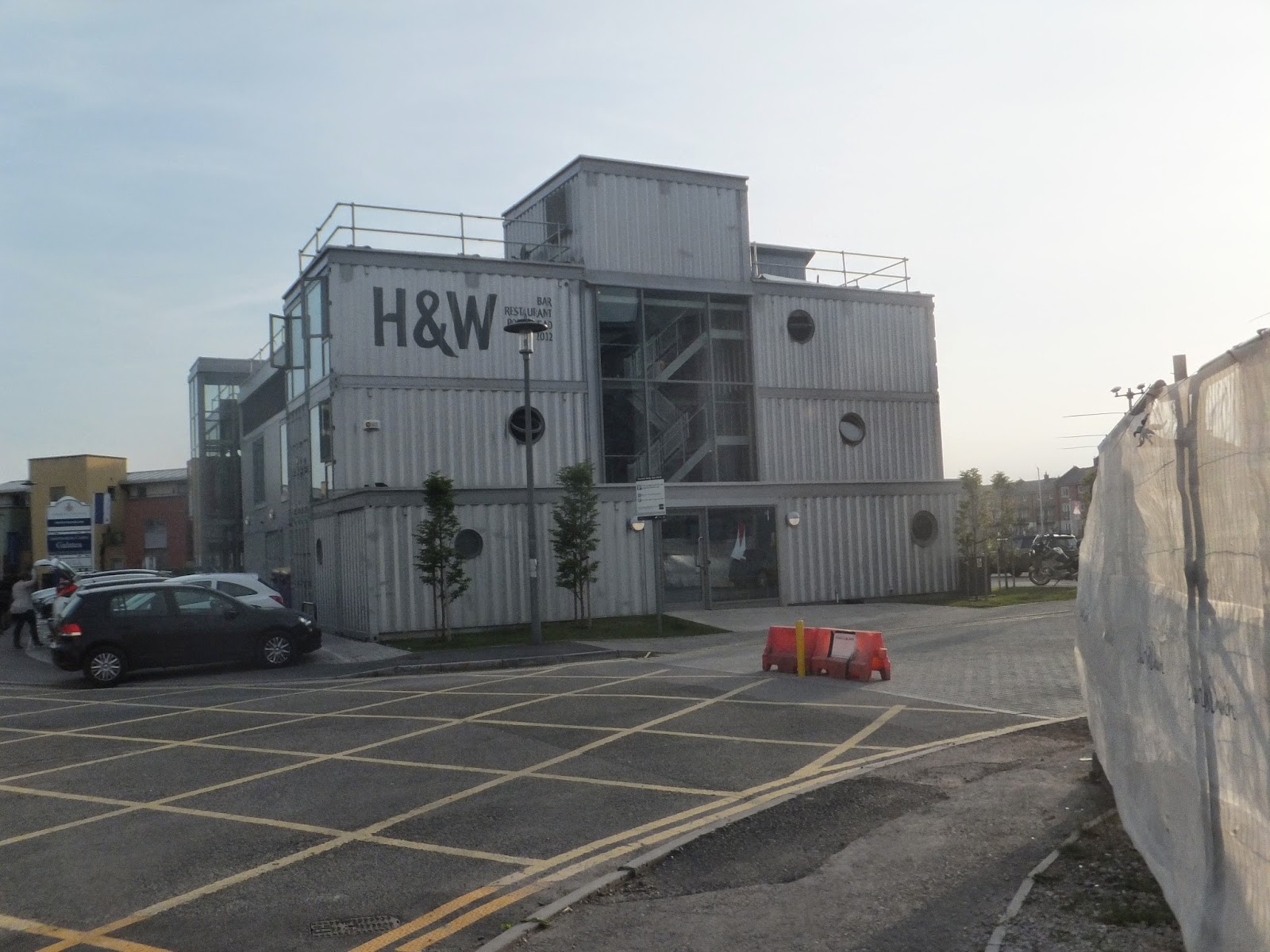 And finally we no longer have a Cockapoo but a Marinepoo! 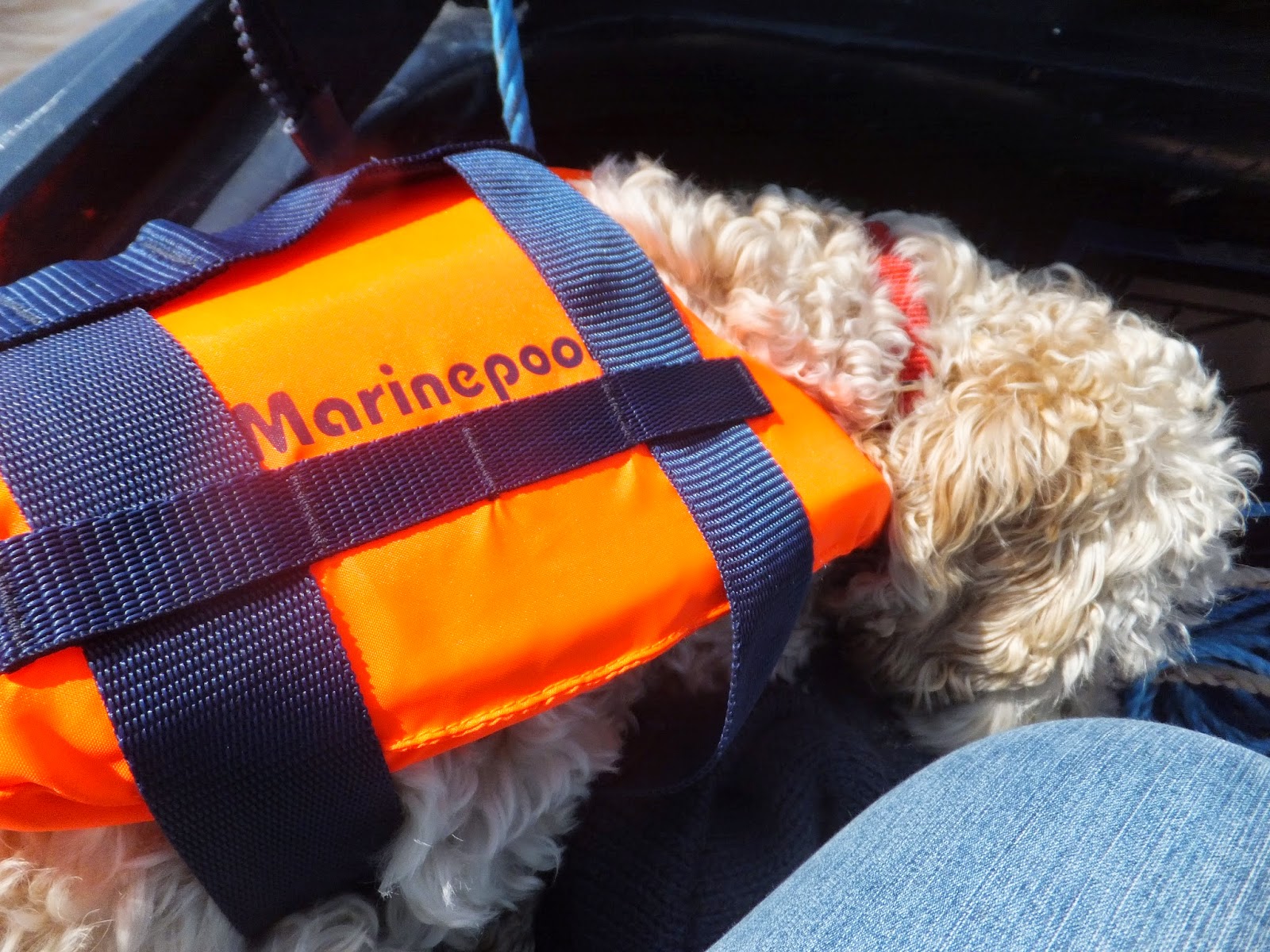