We were woken at 7.30am by someone mowing!  The gardeners were hard at work at Thames Court, still it is our usual waking time so no harm done!

We had a bit of a panic this morning as Richard was showering.  The pump stopped working!  He finished quickly and then bailed out the shower tray with the dustpan.  I got in and did the same though it always seems to take me longer than him.  I put the pump on again and it seemed to be pumping out some water so I left it on.  When the level went down I could see a piece of plastic in the drain hole!  No wonder the water wouldn’t go away! 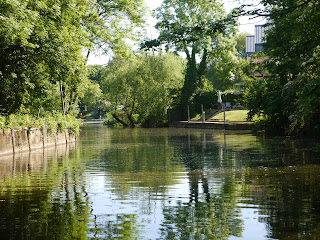 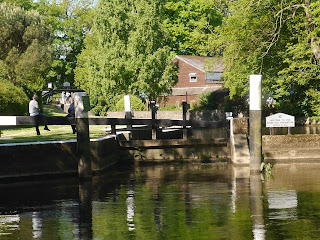 We were away from our mooring just after 9am, down through Shepperton Lock and turned right to go to the River Wey.  We watered up and then started on our way down the Wey (!). 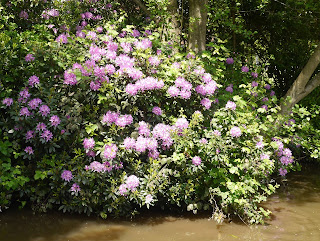 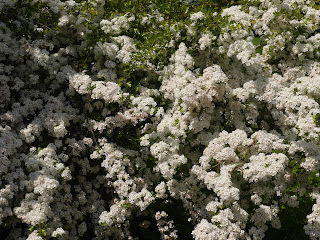 I just love the Wey.  It is so beautiful – lush and green.  Rivers are very different to canals.  At one stage there was a lovely smell of rhododendrons as the flowers came right down to the water.

We hardly saw any boats but of course we met one in a bridge hole and on a bend – there was a screeching of brakes from both boats!

We caught up with Festina Lente and Klara at Pyrford and, guess what, we adjourned to the pub!  We sat outside and I had the sun on my back and it was quite hot.

We had planned to stop overnight on the meadow above Newark Lock so we left the others and moved on.  We shared Pyrford Lock with another boat.  The skipper said that he was enjoying the locks on the Wey and as long as you tied up properly they were easy.  He tied the stern rope up, the centre rope to a forward bollard and then the bow rope to the same bollard – Richard held Mary H on the centre rope!!!!  I would say that if we are in a Wey lock on our own we do use stern and bow ropes but it’s not really necessary when you share. 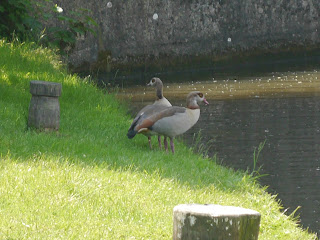 At Newark Lock there was a young squirrel by one of the bollards.  Muffin went to investigate and I think he could have caught it by its tail if I hadn’t shouted at him to leave it.  It was really sweet.

There was one other boat on the meadow but a long way from us, so a lovely, peaceful place.