Stenson was our first lock which was manned by volunteer lockies and we didn’t have to do anything.  I took these photos to show how much the gates are leaking in the 12 feet 4 ins deep lock. 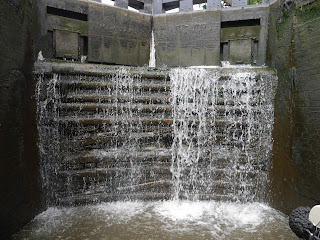 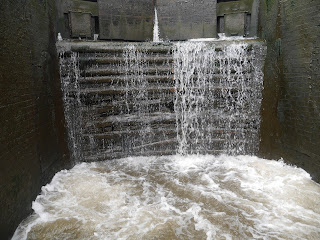 There is a little café above Stenson Lock and each time we go passed I think we should stop for a bacon buttie – once again we didn’t but the smell was extremely tempting!

We stopped at Willington to get milk and use the services.  I gaily walked up to the Co-op only to find it wasn’t there!  There is a small village stores opposite so we went in there and got the milk.  The girl said that the Co-op moved two years ago and is now just down the road under the bridge.  I had to go and investigate and it is a nice shop.

On my way back to Mary H I passed a boat called Two Jays.  Festina Lente, Ferndale and Ewn ha Cul have spoken about Joan and Jim on Two Jays on many occasions as they were all moored in Aston Marina for a few winters.  Joan, as I now know, was watering her plants so I asked if she knew the others – and it was the right boat :-)  We had a long chat before I said that I better go or the others would wonder where I was!

When I got back to the boat it had more or less been decided that we would all go to the pub for lunch.  So we wandered down to The Dragon and had a very nice lunch. 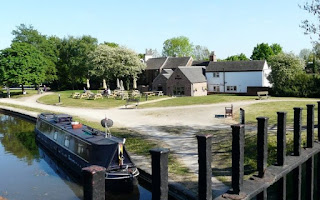 The services at Willington are daft!  They are on the off side of the canal with only room for one boat so if one is filling with water you have had it!  I’m afraid that both our boats nosed into the winding hole and got rid of what they had to get rid of!

We then crossed the River Dove on an aqueduct that was refurbished in 2003. 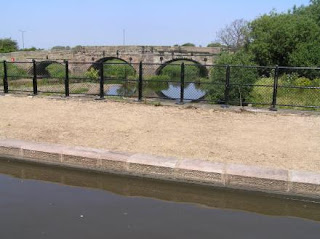 Dallow Lock in Burton-on-Trent is the start of the narrow locks.  At one stage there was a queue of four boats waiting to go through. 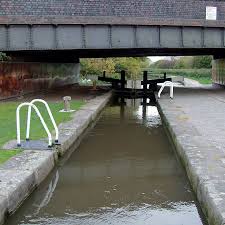 Through Burton-on-Trent which is really nice by the canal.  Richard’s favourite beer, Doombar, is now brewed under licence in Burton.  Doombar is Sharp's Brewery flagship ale. Founded in 1994 in St Minver Lowlands, Rock, Cornwall, by Bill Sharp but since 2011, the brewery has been owned by Molson Coors.  The bottled version only has been brewed in Burton - 267 miles away from Rock, since 2013.

We had planned to go up to Branston Water Park for the night but in fact pulled over a few hundred yards below Branston Lock.