Well we didn’t get the forecasted thunderstorms during the night thank goodness.  We had some rain during the evening but not much.

I took this photo at Hawkesbury Junction.  I’m not sure why Muffin is up on the bridge and I don’t think he knows either! 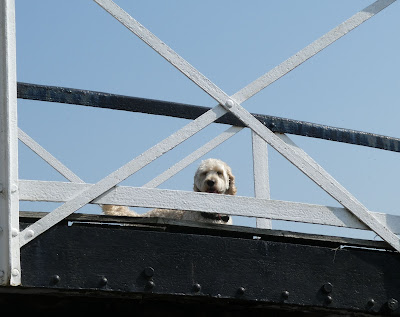 We were staying put today so had a lazy morning followed by a lazy afternoon – well for me anyway.  Richard was crossing things off his list with gusto!  I’m so glad I haven’t got a list for the boat though my list for home is getting longer ☹

We found this bat box attached to Bridge 34.  We weren’t too sure what it was to start with but then noticed that it has a bat on the front! 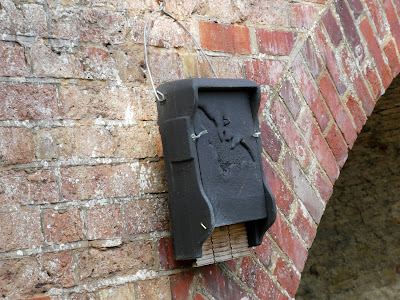 Richard installed a water gauge during the winter of 2016/17.  It has made life a little easier as we always used to fill up with water every couple of days whereas now we can see how much is in there.  It means we are only filling up about every four or five days (we are hungry water users!).  In the shower this morning I was wondering how much time it has saved us, but we are on canal time and does it matter anyway?!

This blackboard was outside the Greyhound at Hawkesbury and amused me! 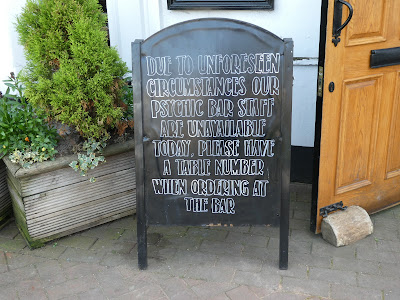 When the North Oxford Canal was straightened it challenged the capacity of the three locks at Hillmorton, the first on the canal after the stop lock at Hawkesbury Junction. The solution to the congestion was to duplicate or twin the existing locks at Hillmorton, creating three pairs of two parallel narrow locks, which allowed for twice the traffic to pass the lock at any time. The work to double the locks was completed in August 1840. Not only was the capacity to pass the lock doubled, but the time taken was decreased as the locks were narrower. Tests showed that the locks could be operated in as little as one minute and 20 seconds – I assume that is just one lock.  We are going up the locks tomorrow so I will have my stopwatch with me but I don’t hold out much hope!

Posted by Linda Gifford-Hull at 10:05