Barcelona today!  It should have been 5 ports on the trot but we did miss out on Civitavecchia.

We had booked a tour through Spain Day Tours.  They had been very efficient with the booking process and I was hoping for good things - and we weren't disappointed!

We were met, in the pouring rain, by Ignazzi and his lovely Mercedes people carrier.  As we had been to Barcelona before (in fact Richard proposed to me in Barcelona 😀😀) we chose to go out of the city and up to Montserrat. 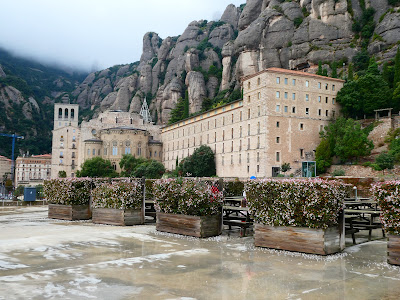 On our journey Ignazzi gave, pretty much, a running commentary (not in his native language) while driving through a busy city.  I was sitting in the front seat so could see how well he managed it all!!  We asked him about Catalonia and their push for independence and he gave us his candid opinion.  It was very interesting and I didn't realise that six separatist politicians are still in prison awaiting trial over their role in last year’s independence push.  Of the six prisoners Jordi Sànchez and Jordi Cuixart have been in prison since 16th October. Oriol Junqueras went into Estremera jail on 2nd November, and Romeva, Forcadell and Bassa, on 23rd March.  There are lots of yellow ribbons around once you get out of Barcelona.

The Montserrat monastery is Catalonia's most important religious retreat and groups of young people from Barcelona and all over Catalonia make overnight hikes at least once in their lives to watch the sunrise from the heights of Montserrat.  At 4055 feet above the valley floor, Montserrat is the highest point of the Catalan lowlands, and stands central to the most populated part of Catalonia. The translation of Monterrat is serrated mountain and it does look like that. 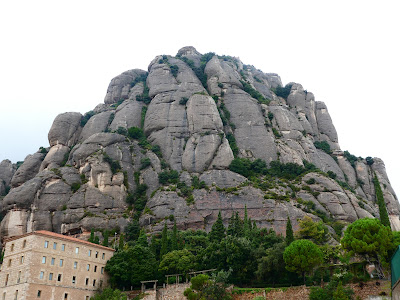 As I said before it was raining in Barcelona but as we started to climb the rain lessened but we couldn't see the top of the mountains.  However we climbed up through the clouds until we were above them and could look down at the lovely views below us. 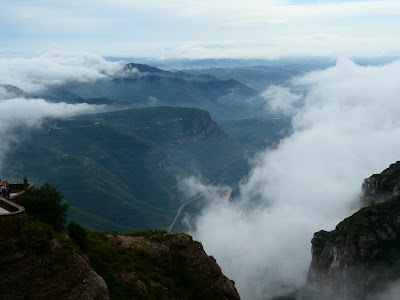 We had three hours up at the Monastery and we wondered how we were going to fill the time but there is a lot to look at and, in fact, we could have done with a lot longer.

We walked up to the monastery and into the Basilica.  We could have gone to see the Black Madonna but, in fact, we could see her quite well without queuing and climbing lots of steps. The whole of Montserrat is built around facilitating the worship of the Black Madonna. The Black Madonna was believed to have been carved in wood in Jerusalem at the beginning of religion.  It is thought that the statue had been hidden in the grotto in 718 to avoid its falling into the hands of Moorish invaders. When it was discovered it was decided to move it to Barcelona but with each step the bearers took, the heavier the half-life-sized statue became. After putting it down several times for a rest, the men realized the image should remain where it was found, on the mountain.  But why is La Moreneta black? She was made of honey oak and would have remained that colour if not for the smoke from candles and fires over the centuries. 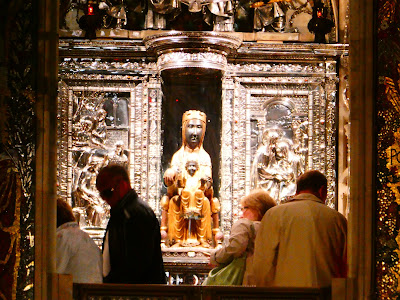 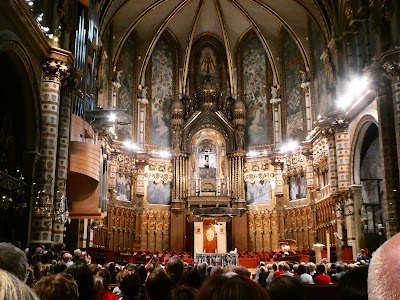 Every day at 1.00pm the famous Basilica choir boys sing in the Basilica.  The acoustics were wonderful and their voices spread around the building.  The choir is believed to be the oldest children's choir in Europe.  Apparently the fees for the choir school are very expensive but each boy receives royalties from their records - they have now recorded over 100 albums of choral music.The boys wear a white surplice with large arm holes.  When they are not using their hands they put their arms inside the surplice - it looked really weird! 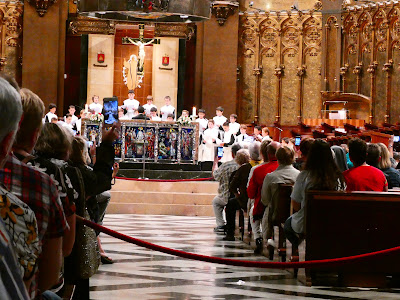 The Sant Joan Funicular connects the monastery with sacred sites, walking trails and viewpoints higher up the mountain. With a maximum gradient of 65%, it is the steepest funicular in Spain.  It is 1650 feet long with a height of 814 feet and takes 6 minutes to get from one stop to the other.  The line was originally built in 1918, and modified to increase capacity in 1926.  Penny declared that there was no way she was going to go up in it but the rest of us were up for it but, sadly, we didn't have time. 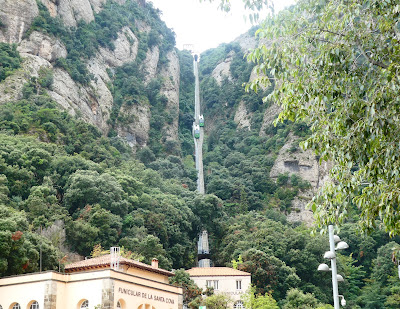 The Aeri de Montserrat is a cable car which runs from the bottom of the mountain to the monastery.  It first started running in 1930, travels at a speed of 5 metres per second at a gradient of up to 45% and takes 5 minutes.  Penny didn't comment on going on this but I guess it would have been a no! 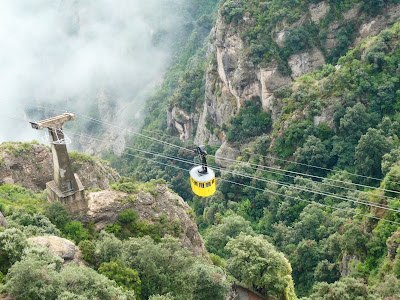 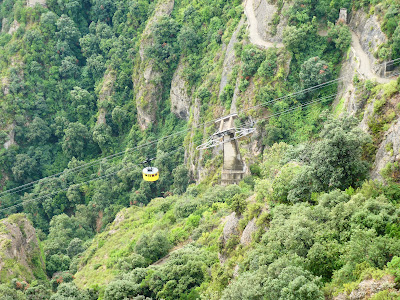 Montserrat Rack Railway runs on a line which is 3 miles long and has a rail gauge of 13 ft 3 3⁄8 in. It overcomes a height difference of 1,804 ft with a maximum gradient of 15.6 %.  The traditional way up Montserrat mountain had been on foot or horseback along the Collbató. It was not until the second half of the 19th century that an alternative and much quicker access way was inaugurated. This was a wide gauge line.  The rack railway was inaugurated on 6 October 1892, and it soon became the most popular railway in Catalonia. It cut the journey time between Monistrol station and the monastery to one hour and five minutes.  The old Montserrat rack railway made its last journey in 1957, but the dream of seeing it back in action one day was never lost. During the 1980s this desire, coupled with the increase in visitors and consequent congestion of vehicles in the natural park area.  In July 2001 work began on the new rack railway. Finally, on 11th June 2003, the new rack railway was opened.  For those of you who don't know a rack railway (also known as a rack-and-pinion railway, cog railway, or cogwheel railway) is a steep grade railway with a toothed rack rail, usually between the running rails. The trains are fitted with one or more cog wheels or pinions that mesh with this rack rail. 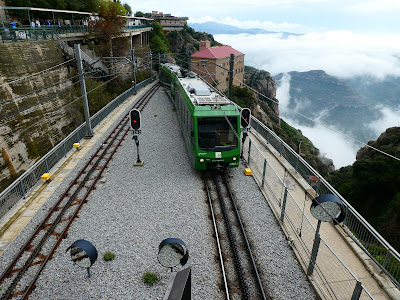 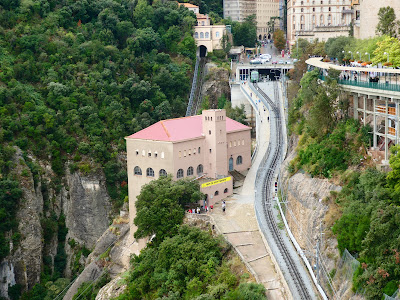 There is also another funicular, the Santa Cova, but it is not running at present. 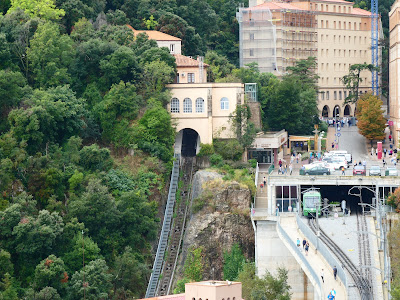 I have taken the following from the Barcelona Tourist Guide website and I found it fascinating - I hope you do too.  It is followed by some more photos.


The history of Montserrat is fascinating and started in 880 when a small group of shepherd children saw a bright light descending from the sky in the Montserrat mountains. In the same moment the children heard angels singing and the music filled their hearts with a radiant joy.

For the whole month following the first visitation the parents were also witness to the same heavenly experiences and were left with only one conclusion. The visions were a sign from God.

A local vicar was brought to the scene and witnessed the same experiences as the children and parents. The visions occurred in the same location in a cave on Montserrat mountain. When this cave was explored by the religious elders of the community they found an image of the Virgin Mary. And from that moment on the cave became a holy sanctuary for religious pilgrims.

Today the site of the visions has been marked by a Holy Grotto on the mountain. You can walk to the Holy Grotto and see first hand where these events took place. The Holy Grotto has now been ordained a holy place and is visited by pilgrims and curious onlookers from all over the world. 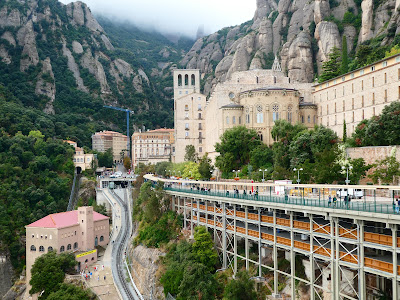 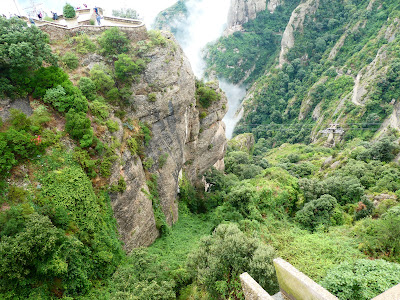 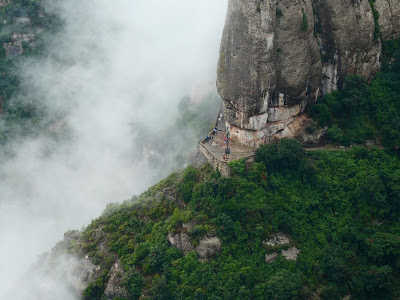 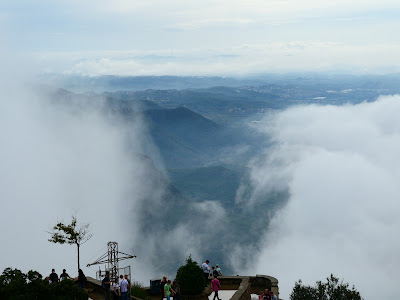 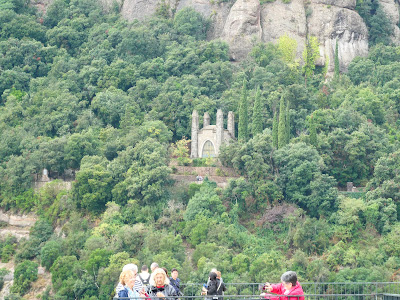 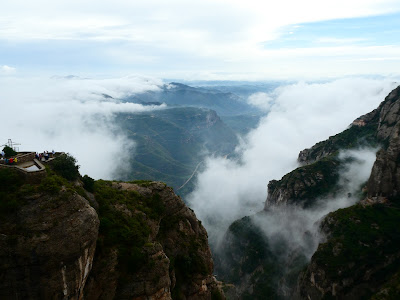 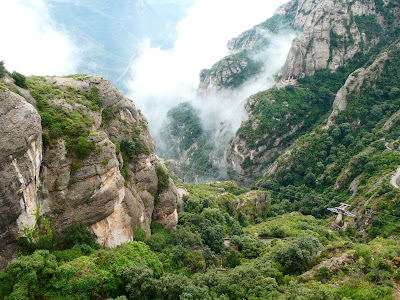 Posted by Linda Gifford-Hull at 09:15