Today was definitely a case of “leaving the best to last”.

We were supposed to be alongside today but somehow another ship had muscled in on our berth!  We were allowed alongside until 10am when the big nasty ship was coming in and would push us out of the way.  Richard and Penny were both convinced that there would be a BIG queue to get off the ship before 9.45am so they insisted that we have a quick breakfast and get off at 9am.  At the allotted time we strolled off the ship (not a queue in sight) and sat and waited for an hour until our taxi arrived!!

Our Mercedes taxi arrived, driven by Fanis, from Kefalonia Taxi Service, at 10am and we set off for our 4 hour trip.  The vehicle might have been a Merc but it was a car not a people carrier which meant 3 people had to be shoe horned on to the back seat.  Sadly, I get very car sick and had to sit in the front – such a shame!

Our first port of call was St. Gerasimos Monastery. 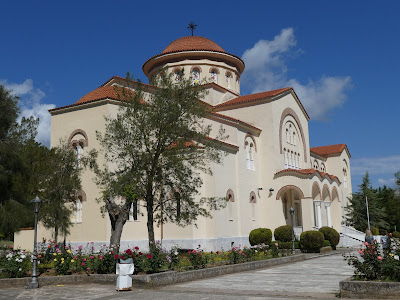 Gerasimos (1506–1579) came from the aristocratic and wealthy Notaras family. He was ordained a Monk at Mount Athos, went to Jerusalem for 12 years, spent some time in Crete and Zakynthos and arrived on Kefalonia in 1555.  He planted this tree in 1570! 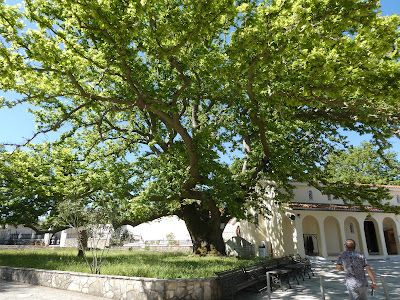 We also saw this Bottle Brush tree.  I don’t think I have ever seen one before but Penny says she has one in her garden, but it doesn’t do very much! 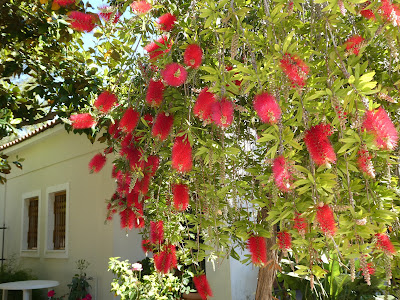 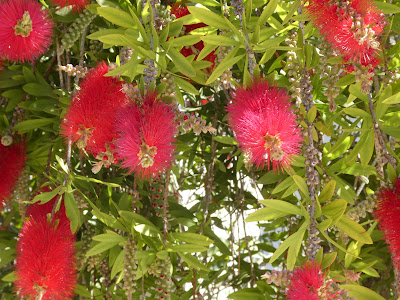 The Monastery is actually for Nuns not Monks – it seems that in Greece both live in monasteries and Nuns don’t live in a convent.  Fanis had never heard the word convent. 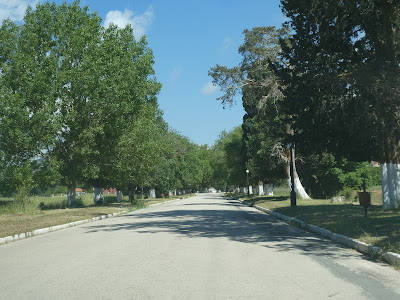 Five minutes down the road is the Robola Co-operative.  In 1982, the growers of the Robola grapes founded the Robola Cooperative of Kefalonia, which currently has 300 members.  The first harvest took place in 1983. In 1987, the Co-operative acquired its own winery, which sits at an altitude of 410 meters.  The Cooperative collects and processes almost 85% of the total produce of Robola wine grapes. The island of Kefalonia is the most mountainous Ionian island and hosts some of the most important vineyards in Greece.  We went in for a tasting.  We tried three wines – 2 of which I found rather unpleasant, but I did enjoy the third and bought a bottle.  I just hope it tastes as good in the UK as it did in Kefalonia! 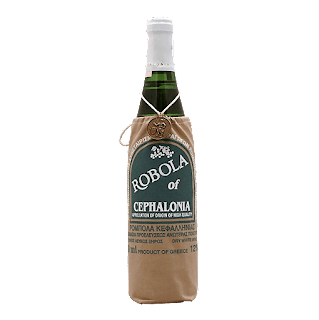 Up over the top of the mountains, well not exactly as the highest point is Mount Ainos at almost 5,500 feet.  We stopped at the Drogarati Cave which was discovered 300 years ago and opened to the public in 1963. It was discovered when a strong earthquake caused a collapse that revealed the cave's entrance.  Speleologists say that the cave is about 150 million years old - it is about 150 feet deep and has a constant temperature of 18°C.  There are 140 steps to get down into the cave, so Jim and I didn’t go down.  Apparently partisans hid in the caves during WWII. These are Richard’s photos. 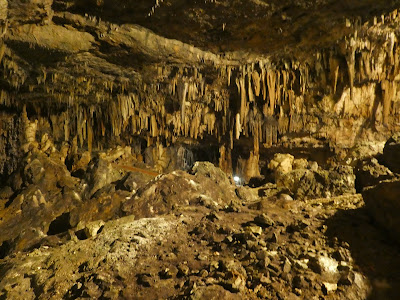 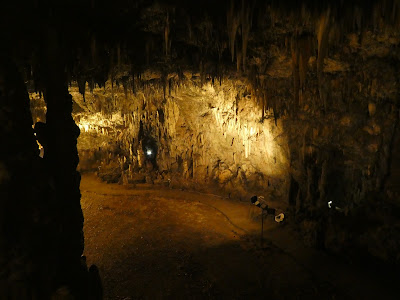 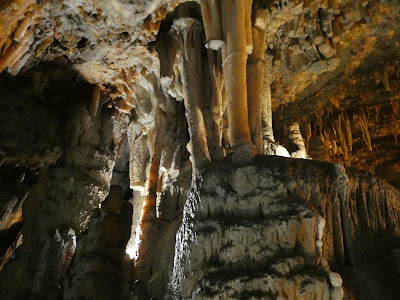 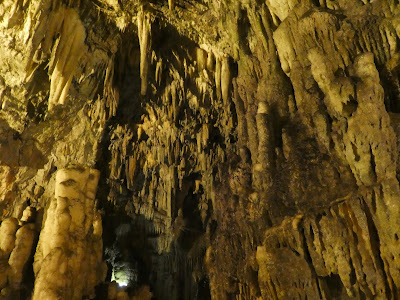 Next, we drove the short way to Sami.  Sadly, we didn’t have time to walk around but from what we saw it looked lovely.  The modern village is built close to ancient Sami, one of the most important archaeological discoveries of Kefalonia.  Sami is also the place where the village scenes in Captain Corelli’s Mandolin were shot.  The village was reconstructed to look like it did before the earthquake of 1953.

Just outside Sami is The Cave of Melissani inside of which is a lake that has trees and forests surrounding it.  The roof of one of the halls caved in centuries ago letting sunlight filter in. The water in the lake, which is about 65 to 100 feet deep, is a mixture of fresh water and seawater. It is about 500 metres away from the sea and the water is higher than the sea level by 1 metre. The brackish water enters the cave from one end and flows out from the other. Water is replenished by the springs gushing underneath the water inside.  Myth has it that the cave was named after the nymph Melissanthi who committed suicide because her love for God Pan was not reciprocated. 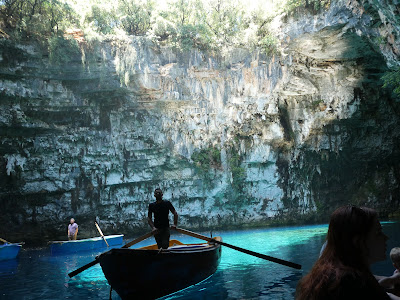 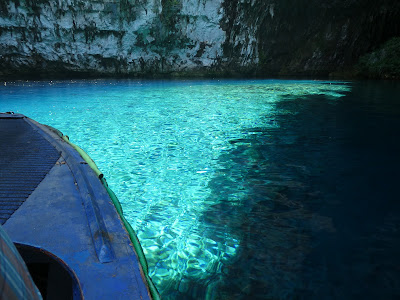 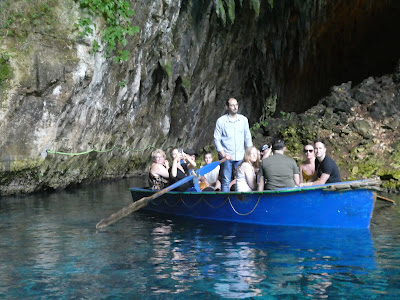 We then drove across the Islands to a panoramic view of the multi awarded and renowned, Myrtos Beach.  The beach has a semi-circular shape surrounded by impressive white rocky cliffs with lush vegetation on top of them creating a spectacular setting.  The natural beauty of Myrtos is the trademark of Kefalonia and one of the most photographed places in Greece. 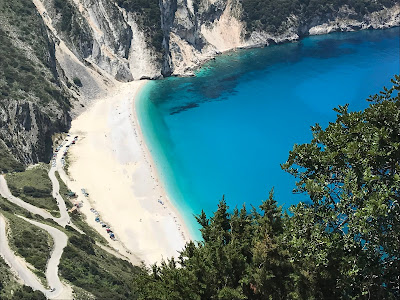 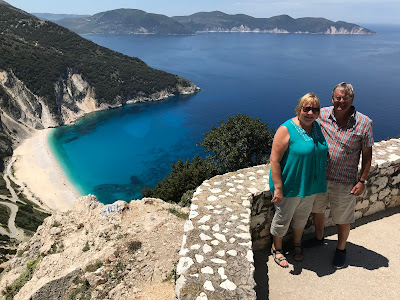 It was then time to head back towards Argostoli and the Discovery.  We passed by the place where the Germans executed about 5,000 Italian soldiers and others drowned when Italy changed sides during WWII.  The Italians had surrendered when they ran out of ammunition.

We also saw the De Bosset Causeway which, at 755 yards long, is the largest stone bridge on a seawater body and has been in existence since 1813 when the Swiss engineer Charles Philippe De Bosset was employed by the British Army.  During the 1953 earthquake parts of the bridge subsided, after backfilling and straightening of the pavement these damages remain visible from the side until today.  In 1970, the bridge was listed as a historical monument.  From 2011 to 2013, the bridge was renovated and re-opened as a pedestrian bridge. 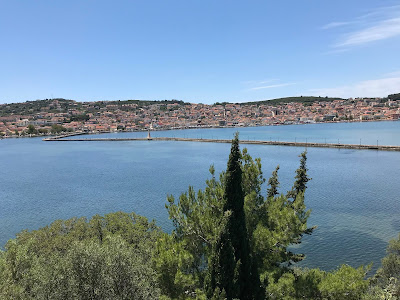 We also had a good view of Discovery, now at anchor. 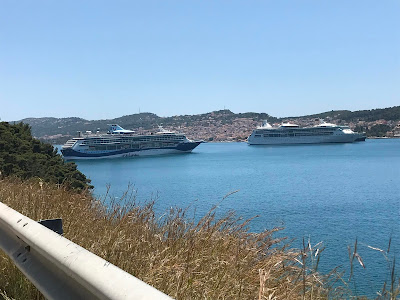 When we got back to Argostoli we said goodbye to Fanis and headed back to Discovery on a tender.

The above is all about our tour of Kefalonia but here are a few more facts about Kefalonia that Fanis told us about.

Kefalonia has about 40,000 inhabitants with about 10,000 living in Argostoli.

One of the greatest disasters to ever befall Kefalonia was the earthquake of 1953 – in fact there were actually four quakes. The worst earthquake measured 7.3 on the Richter scale. The centre was on the southern tip of the island and raised it by nearly 2 feet.  The worst blow to the economy was that 100,000 residents left the island to live elsewhere. This left only 25,000 residents on Kefalonia. 600 people died and the survivors who did not leave the island rebuilt everything.

Many British people either rent houses during the winter or own houses.  Average winter temperature is 10° to 15°

Kefalonia is a very green island as there is a great deal of rain – mostly in November and December.

One of my lasting memories of Kefalonia are the Cypress trees poking through all the wooded mountain sides. 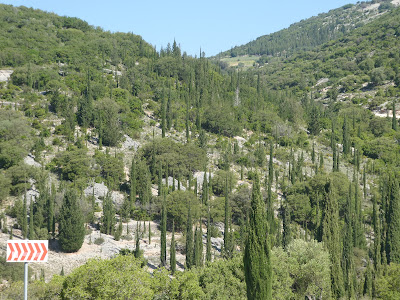 I have definitely left a part of my heart in Kefalonia and, one day, I will go back and collect it.

Posted by Linda Gifford-Hull at 13:51