We were a bit late in waking up but were still away around 10am.  Whitchurch Lock was just around the corner and we were the only boat in there.  This is one of my favourite views as you come out of the lock. 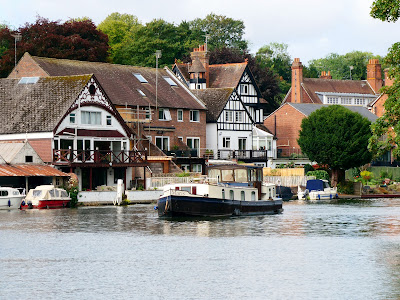 I noticed on the map the words – The Grotto.  Of course, I had to have a look and see what it was!  The Grotto House or Basildon Grotto was built in 1720 by Viscount Fane of Basildon Park for his wife Lady Mary Fane who was a Maid of Honour for Queen Anne. The original much smaller house was attached to a 'grotto' elaborately decorated with shells and an adjoining 'rock room' for Lady Fane's 'retirement and pleasure'. After the Basildon estate was sold to the Sykes family in 1771, the original Basildon Park manor house was torn down and The Grotto House was substantially altered and expanded in size - although this involved the dismantling and removal of the original shell grotto that gave the house it's name. When the last member of the Sykes family died in 1875, the house was bought by a long term tenant Arthur Smith who subsequently became the High Sheriff of Berkshire.  It remained a family home until 1953 when the last occupiers sold it to the Institute of Park & Recreation Administration (later known as ILAM - Institute of Leisure Amenity Management) who used it as their head offices and training college. It stayed in use until around 2007 when ILAM left the premises and it was sold to a new owner. Now the good news 😊  The Grotto has been granted planning permission to become a £32 million luxury country hotel and members’ club.  It will be converted into a 53-bedroom hotel with a restaurant and bars.  This also includes the construction of six new two-bedroom detached lodges associated with the hotel and the replacement of several dilapidated outbuildings to create new leisure facilities.  In the grounds, the tennis courts will be refurbished, the boathouse will be reinstated, a 20th century studio building will be replaced by a two-storey spa and gym with outdoor pool and a ‘coach house’ extension will be built, linked to the original building by a glazed walkway, to accommodate 19 of the guestrooms.  So, a nice happy ending 😊
We dropped off the rubbish at Goring and just as we were about to go into the lock the heavens opened!  The crews of one narrowboat and four motor cruisers all got absolutely soaked.  Of course, the rain stopped as we left the lock! 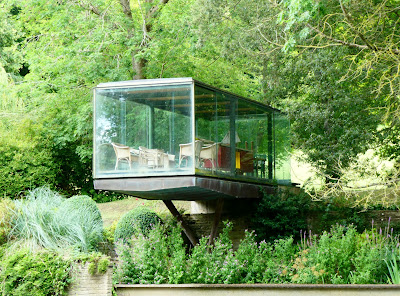 Cleeve lock was on self-service and was very well operated by the young son from a motor cruiser.  It is quite a small lock so only three of the boats from Goring Lock could get in. 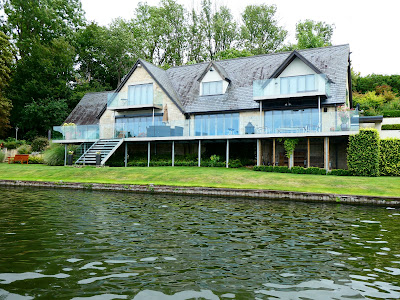 I thought we were stopping by Moulsford railway bridge as we had on our way down, but Richard wanted to get further.  Wallingford was rammed, as usual, but with a few boats moving up or down we could have got in!

Benson Lock and then under Shillingford Bridge.  Richard hadn’t had any lunch so I guessed we would pull over at the Shillingford Bridge Hotel.  I have heard all sorts of things about charges, so I walked up to Reception.  There is no charge during the day, but it is £15 overnight which entitles you to a 10% discount in the dining room and bar.  However, I do wonder if anyone would have bothered us for payment if we hadn’t have offered it! 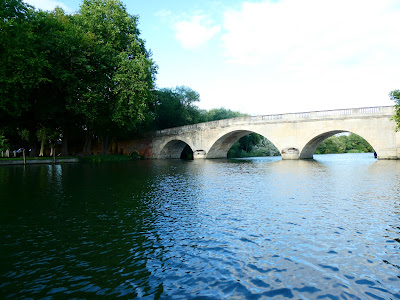 I spent the afternoon on my Ancestry – I am getting deeper and deeper into the years and the generations. 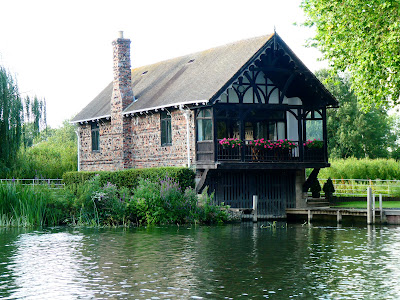 We decided to use our 10% discount and went for a meal at the hotel.  Last time we stopped here, probably about 5 years ago, the food wasn’t brilliant but what we had tonight was good.  The menu isn’t exciting, but I had a lovely Paysanne salad.