I really must get up earlier!  At home and when we are away, we always put BBC Breakfast on the TV in the bedroom in the mornings but I am inclined to watch to the end and then, of course, discover that it is 10.15am and not 9.15am!

We went to Turre this morning for two reasons.  Firstly, to stock up on gin and wine at Super Turre and also to look at, wait for it, saucepans!  We don’t like the ones we bought the other day as there is no insulation on the handles.  In the box was a little silicone gripper thing but I still prefer a proper handle.  The shop that was recommended is called Home Sweet Home Mini!  They had about six sets which looked as if they would fit the bill but there is another shop we need to try first.  When we bought the pans, in the second hand shop, the lady said that if we didn’t like them she would re-sell them for us and we should get the money back that we paid for them.  The only draw back is that we have to wait until someone buys them!

From Turre we went to Garrucha.  I had a quick whiz round Lidl and then we went to get some lunch.  The place by the marina that we went to last year was closed as was the one next door but the third one, El Birra, was open.  It was March last year so maybe that’s the reason.  We decided to have a couple of Racions (portions), potatoes in garlic mayonnaise and prawn cocktail between us.  They were huge, thank goodness we didn’t have anything else! 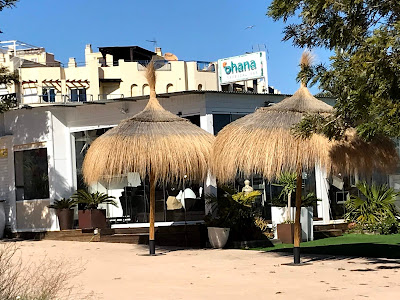 While we were sitting at the restaurant, I played with my plant app, Plant Snap.  However, as I was trying to identify weeds, it kept coming up with different names!  They were pretty though.  The names below are what Plant Snap came up with but whether they are right or not – who knows or, in fact, cares!!

Back to the villa where we read and dozed!

Having said yesterday that I needed to get up earlier, we had to today.  We were expecting an electrician to come and mend a couple of sockets at 9am so we were both up, dressed and breakfasted by that time – he arrived at 9.35am!

The bonus of being awake early was that we got to see a lovely sunrise.  We have seen a couple before but this one was wonderful. 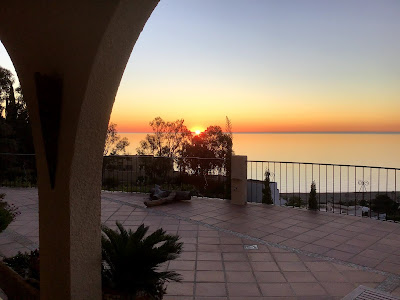 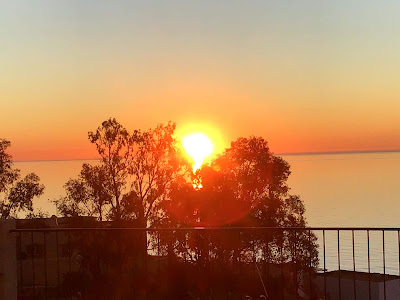 It was really hot this afternoon.  We umed and ahed about going out but as it was so glorious up here, we decided to stay put.  The weather forecast had said that today was the last day of the lovely weather, so it seemed to make sense to make the most of it and not be in the car.

The road below us was really busy today.  The new villa seemed to have quite a few deliveries.  There is also something else going on, which is not connected with the villa, which needs large rocks and soil so I guess a new retaining wall is being built.  Our road is a dead end so each time a lorry goes past it has to come back again!  Most lorries drive in and turn round, but the rock lorry always reverses in – rather him that me! 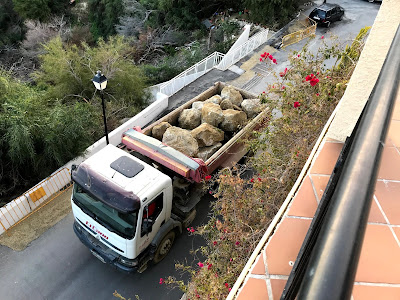 He is going backwards!

When we were here last year, I had brought an Amaryllis bulb with me and I loved watching it grow.  Robert and Laura bought me one for Christmas and it is now on the kitchen windowsill and doing very well. 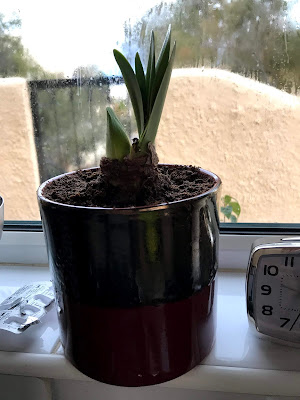 After yesterday’s glorious sunrise we woke up to rain today.  The forecast said 5% chance of rain so maybe we were just unlucky.

In the afternoon we went to return the saucepans we had bought at the second hand shop!  As lovely as they were the handles were a hazard.  They had no insulation on them at all and if you tried to pick up a hot pan with your fingers you burnt yourself.  They did come with one silicone pot holder which didn’t really help when you need two hands to pick the pan up.  I messaged the lady at the second hand shop yesterday and she said that she would put them on at €79 which, after they had taken their commission, would give us back what we had paid.  So, they are back in the shop and we are hoping that someone will buy them.

It was such a miserable day that only cake could make it better!!  Our favourite place, Moca, is closed on a Wednesday so we had to find somewhere else.  Eventually we went to Martin Morales Gastropub (who I think are a new kid on the block) where they had a good range of cakes but Moca’s are still the best!

I am heavily into Ancestry and my second cousin once removed (!) had sent some papers from the US to home.  Victoria had photographed all 27 pages and so I took them to be printed.  It seemed to take forever and then, with just 3 pages left, the ink ran out in the printer, so I’ve got to go back tomorrow and collect them.

I took this photo to show what sort of day it had been.  Someone somewhere, maybe in a fishing boat, was getting some sun. 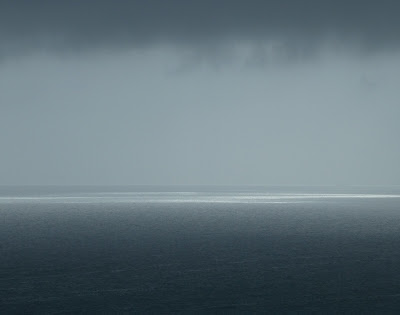 Posted by Linda Gifford-Hull at 14:44