Muffin woke me up quite early this morning by making his silly little noise.  He was sitting by the bed and I told him to go back to his bed.  When Richard gets up Muffin is allowed up on our bed and I realised that the poor dog was cold!  I put him under the duvet, and he snuggled into me.  I felt a really bad Mother!
We were expecting a Sainsbury’s delivery between 10am and 11am.  I got a phone call to say that it would be about 15 minutes.  We walked up to where the bins are as the pub seems to have taped off it’s car park.  We waited and waited and eventually 35 minutes later the van arrived.  The driver apologised and said that the Sainsbury’s satnav had taken him all over the place, and in the end, he had used his phone to navigate.  We got the shopping back to the boat, put it away, had a coffee in the lovely sunshine and then set off down river.
The Lock Keeper was on for our sixth and final trip through Pinkhill Lock.  The Lockie there has a lovely Cockapoo with long legs.  Muffin has short legs (but don’t tell him I said that) so I wondered if we could take some of Riley’s legs and give them to Muffin then we would both have Cockapoos with the right sized legs!  I took this photo while waiting for the Sainsbury man.  Muffin may only have short legs, but I think he stands really well for a cross-breed. 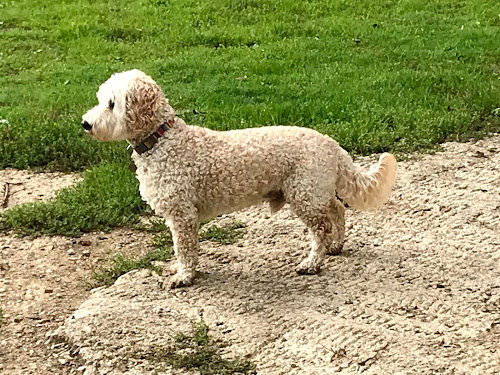 I’d seen this flood mark at Pinkhill before but never noticed that there is another handwritten mark in red from 2007.  I think I am usually too busy looking at the flowers. 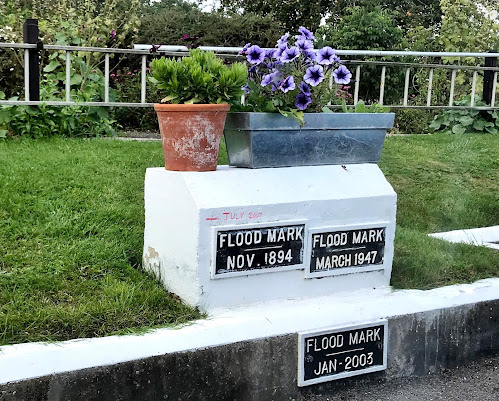 As we approached Swinford Bridge we saw a lone swimmer with a pink hat on, as we got closer, I realised it was a man.  Isn’t is strange how one associates pink with a female.  Anyway, I asked the chap if it was cold and he said that it is this month.

We pulled over above Eynsham Lock to get water and then we pulled back onto the public mooring and had lunch.  We realised that the river really was quite busy today.  We shared the lock with a hire boat who knew what they were doing as regards steering as they had spent many a holiday on the canals, but it was their first river lock and it was on self service.  We also shared the lock with the three Venetian rowing boats we had seen yesterday.  They were a bit worried that there wasn’t room for them, but it was fine, and we let them down the lock slowly.  At the bottom of the lock we dumped the dumpables and then continued on our way. 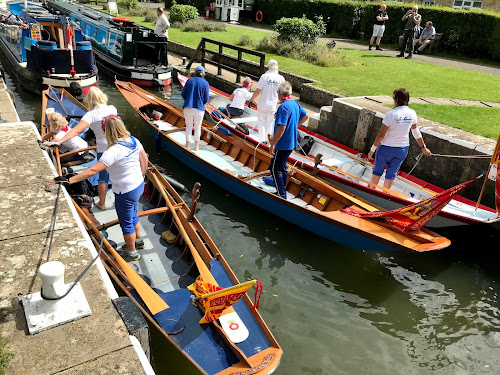 We had planned to go down to Kings Lock and stay on one of lock moorings, but Richard spotted a nice place before we got there.  So here we are on our last night on the Thames for this year.  I always feel sad at this point, but hopefully we will be back next summer.  Tomorrow we will start our journey northwards up the South Oxford.
5.46 miles
2 locks
Posted by Linda Gifford-Hull at 09:59