Yesterday I mentioned that I had heard that a lady had contacted the BBC and today it has been confirmed!  She was interviewed on the radio this morning about yesterday’s debacle.  I found this bit from a website called Newsletter.

“We phoned everybody. The port authority – they said it wasn’t them, but they’d spoken to the police.

“We spoke to the health manager, and they said it’s the ship.

The whole situation is crazy with no-one accepting responsibility.

Anyway, enough of all that!  This was our last sea day, and it was rather grey.  Richard and Jim went to listen to a talk about the Jurassic coast while Penny and I went to the sales!  At the end of each cruise, they sell off items from the Celebrity Shop.  These range from watches to clothes.  Most say 30% off but they are still very expensive.  We have bought things in the past but there really wasn’t much to look at today.

Richard and I went for a walk round the deck after lunch and saw a pod of dolphins racing towards us at 90°.  Where they went we had no idea but I just hope they went under the ship and didn’t hit their heads on us.

Penny and I went for some girlie time up to the Sunset Bar on deck 15.  The waiter came round for our drinks order and I had a Tom Collins, I had no idea what it was but it was lovely.  Back in our cabins we opened our free bottle of Prosecco, which we get for being Concierge guests. 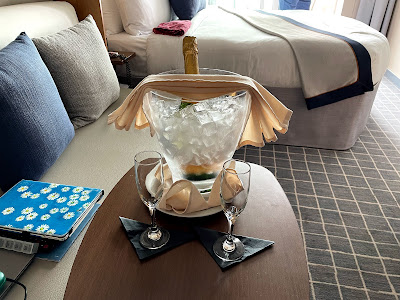 Dinner was in the main dining room as it was Chic Night and the main dishes included lobster and beef wellington. Penny had the lobster which she said was lovely and the rest of us had the beef.  There has been a lot of beef eaten this week! 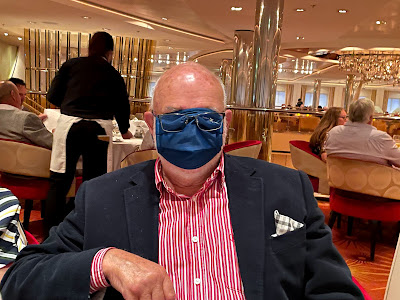 When we got back to our cabin I wondered if I had had too much to drink!  I looked at my bedside clock and it said 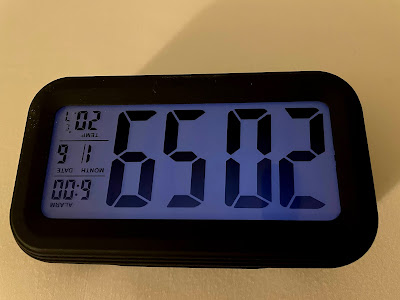 However, our cabin steward had, of course, put it upside down! 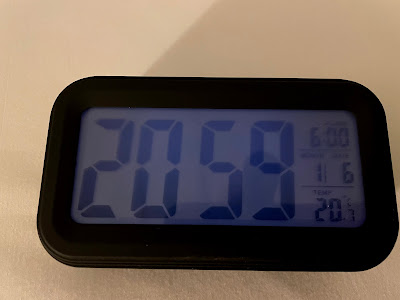 We woke up in Portland.  We hadn’t really planned to go ashore but we heard that the Port Authority was laying on courtesy buses into Weymouth so we thought, why not 😊  It was a challenge to get Jim’s scooter onto the bus but it worked really well.  We were dropped off on the west side of Weymouth harbour entrance, an area I had never been to before.  We walked up to the water then headed out to Nothe beach and fort.  It would have been a struggle to get the scooter up to the fort so we sat and had a coffee overlooking the harbour.  The café was called Stone Pier Café and was in a converted public loo! 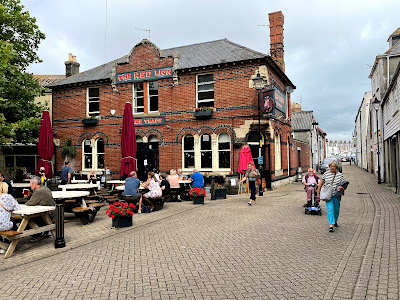 We headed back to the bus stop and just missed a bus.  However, it gave me time to find this place, which is now known as Shire Horse Mews. 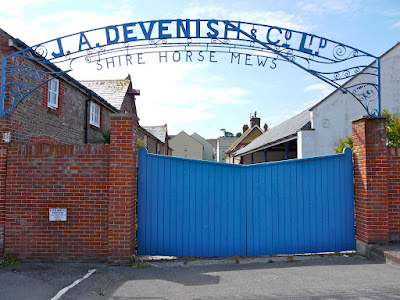 Take a meander to the other side of the square, just behind the Devenish buildings is the old stable blocks where the great dray horses were kept. They would plod along the streets, carts packed with the giant wooden kegs that were ready to be dropped down the hatches that opened up in the ground to the cellars below the pubs.

Always a fearsome sight to a small child, the heat and strange smells that rose from these black holes in the pavements that whispered of evil spirits and dark places where children could be locked away…

Now instead of hooves on cobbles and sweet smelling straw in mangers, they contain holiday lets and sweet dreams of lazy sunny days to be enjoyed.

I could almost hear the horses 😊

Back onboard we didn’t need any lunch as we had had a large piece of cake each in Weymouth.

In the afternoon we all went up to the Sunset Bar and sat out in the sun.  I had another Tom Collins, but it wasn’t a patch on yesterdays!

We returned to our cabins to watch the sail away.  Down on the quay we could see a very small (5 people) troop of historic soldiers with a canon!

As we began to pull away the order “Fire” was given and there was an almighty bang!  It was much louder than we anticipated!!  There were two more firings before the soldiers took their hats off and waved goodbye to us.  It was a lovely end to a good visit to Portland/Weymouth.

As we went through the submarine barrier, we were waved off by some trip boats. 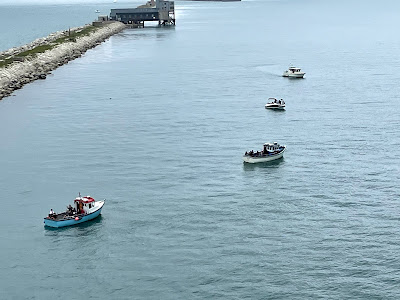 Just a couple of photos of the pilot launch. 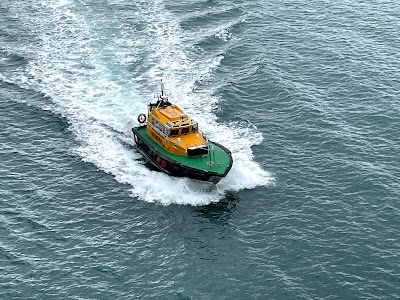 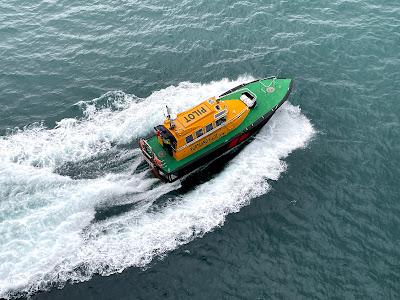 In the evening we went up to the Lawn Grill for a speciality dinner.  As you may gather from the name it was all steaks but also had prawns and scallops.  It was an amazing but huge meal. 10 out of 10 for food and 11 out of 10 for service.

Outside the Lawn Grill was the Lawn, where films are shown during the day.  Jim’s scooter had its own private film show while we were eating. 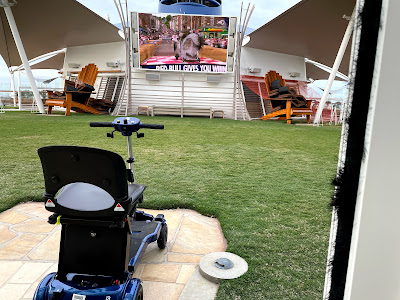 The Barricade Boys were singing in the Foyer at 10pm so we couldn’t miss that.  They were as good as ever but only sang for half an hour ☹

We were docked in Southampton when we woke up.

Usually there is a long wait to get off the ship but with it only being half full, even though we were given disembarkation numbers, we were able to get off when we liked. Our main suitcases had been taken last night so all we had were our carry ons.  Once on terra firma we collected our luggage, found the car and drove home.

It is always sad at the end of a holiday, but I always feel that it is sadder when I leave a cruise ship.  This was our 4th cruise and I have to admit that I do enjoy them.

With regards to Covid I felt safe on the ship.  All passengers and crew had to be double vaccinated.  Passengers had to have a negative PCR before boarding and crew are tested regularly.  Masks have to be worn in all inside public areas.  We were made aware of all this before we set sail.

Posted by Linda Gifford-Hull at 16:36