I’m afraid that I’m going to start this post with a rant ☹  Let me set the scene.  Yesterday we met a boat coming out of a lock.  The lady asked me should she leave the paddle up or down, and assuming that she was new I told her to always leave paddles down.  The boat didn’t appear to be a hire boat.  Yesterday evening they came passed us while we were moored up, they had obviously turned round somewhere.  So, back to today.  As we went up to Lowsonford Top Lock the same boat was moored on the lock landing – not using the bollards but on pins.  They had about 8 fenders out too.  But I digress.  I watched Mother and 3 children lock the boat up and as they went to walk away, I said, “I hope you aren’t going to leave the boat there as it is on the lock landing and will make things difficult for other boat users”.  They looked at me blankly and walked off.  A couple of minutes later they returned, and I thought that they had seen sense, but it would appear not.  As I went into the lock and Richard shut the gate I looked back, and they were just standing on the back deck and Mother waved a wave which looked like a fond farewell wave!  I bet that boat, Smoke, is still there.  Sorry about my rant, but I do feel better for it 😊  One addition to this story in that there was a boat following us up our first lock this morning and the lady said that Smoke had turned a lock on them yesterday.

It was pretty much, as yesterday, a case of one in and one out.  It does make life so much easier.

Some lucky children have got some lovely playhouses – well I assume they are for children! 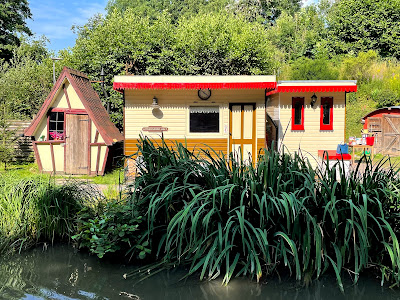 At Lapworth Bottom Lock which is the one under the M40 I took my obligatory photo of a lorry going over the canal but also managed to get Richard going over the lock gate. 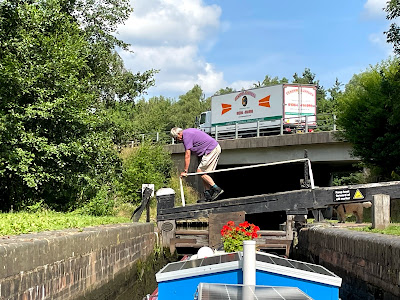 Muffin was in a funny mood today.  He wanted to go with Richard and supervise the lock working but then he wanted to get on the boat, but it was far too deep to jump.  I had to keep saying no until the boat was high enough for him to jump on.  This was at every lock, goodness knows why. 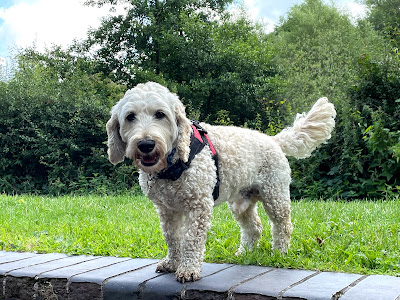 We pulled over below Lock 22 where we had stopped on our way down, but this time it was just for a long lunch, as we were heading to the top of the Hatton Flight and overnighting in the dark cutting. 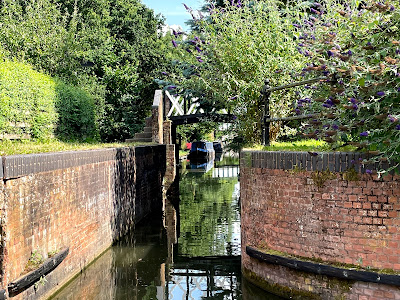 We left the South Stratford Canal about 3pm. We now have 30 miles and 46 double locks to do before we arrive back at the marina.  I think we have help down the Hatton flight tomorrow and I have my daughter, Victoria, and future son-in-law, James coming up at the weekend to help us do the last 25 locks. 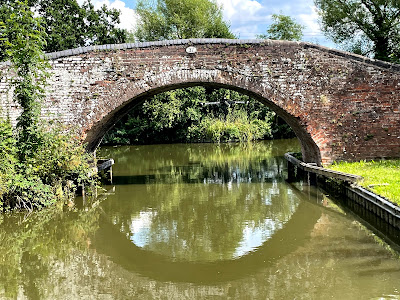 It’s not too bad in the cutting as the sun is shining through the trees but I still don’t like cuttings!

Posted by Linda Gifford-Hull at 10:31