Sadly, Penny was still feeling very stiff and sore today though had slept fairly well considering.  She and Jim decided that they would have a quiet day at home today.

We had to take Muffin to Garrucha where he was going to be clipped.  Luis had done him two years ago on the recommendation of a Cockapoo owner we met walking on the Paseo!  I thought our appointment was at 10.30am but it was in fact at 10am so I was in trouble!  Luis was very good and said that he could still do him.

Before and after photos 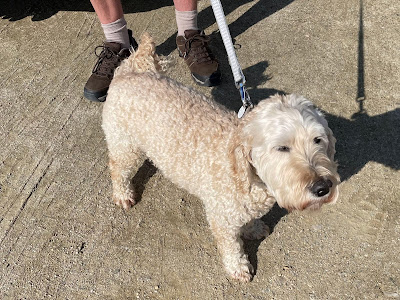 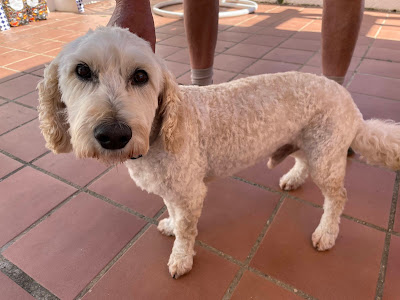 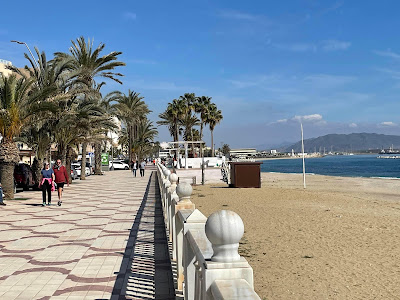 We had a quiet afternoon back at the ranch.  Richard and I both had a swim and did very little else for the rest of the afternoon.

Liz and Phil came round in the evening for my “legendary” (as Liz called it) Paella.  It has become a regular evening while Penny and Jim are here.  It was a lovely evening.  We do like Liz and Phil 😊  Paella is really quite easy to make and always seems to look pretty amazing!! 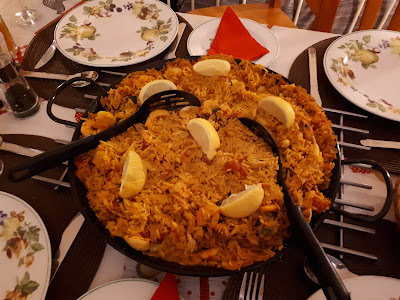 Market day in Turre can’t be missed by visitors.  Richard and Jim sat in a café drinking copious coffee while Penny and I wandered through the market.  It was certainly better attended than it had been two weeks ago when Robert and Laura were here.  Penny bought Jim a gilet and jumper and I got a blouse.

From Turre we went on to Alfaix, where Veronica and Julian had been staying.  (Keep up now – we had lunch with them last Saturday!)  We got a bit lost and poor old Google kept wanting us to do a U-turn.  We finally found the Holiday Property Bond complex but never did find the village of Alfaix.

We found this pretty flower when we stopped to work out where we were! 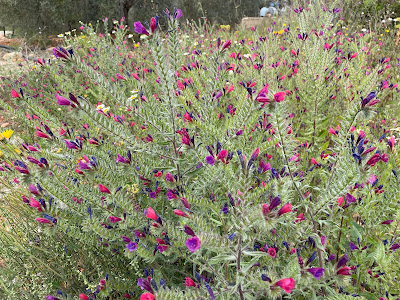 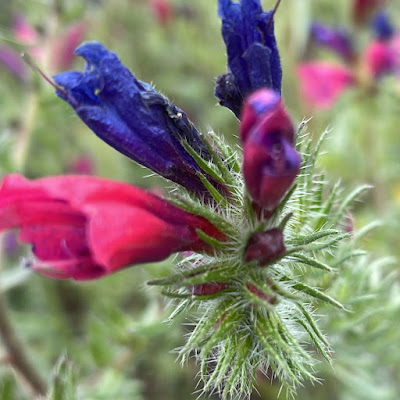 We stopped at Worzels on the Playa for lunch.  Worzels is new, having taken over the property from Moca, one of our favourite cafes on the Playa.  Sadly Worzels, in our estimation, has a long way to go to get anywhere near the same standard as Moca, but then maybe they don’t want to 😞

Richard and I both swam in the afternoon and Penny caught me having a snooze! 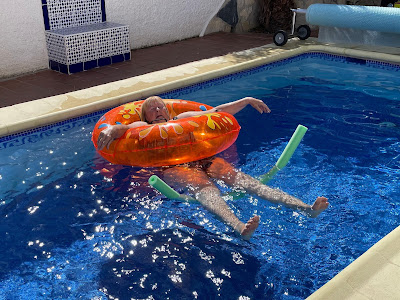 Another lovely day but it was to be a quiet one as Penny was still feeling so stiff and sore after her fall in the bath.

We had coffee on the terrace, and I managed to get a good photo opportunity – we it could be better - agreed! 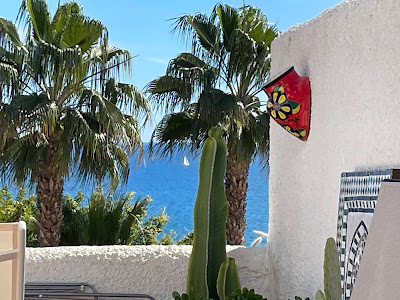 We decided to go to the Chinese for lunch, but there were no outside tables.  I guess we should have thought about that as it was 1.30pm on a sunny Saturday afternoon.  I noticed that one table was reserved so need to remember that.  We couldn’t decide where else to go and ended up at Meson El Que Faltaba at Thomas’s roundabout.  We hadn’t eaten there before so thought we would give is a go.  What we had was good, but I don’t think we will make it a regular haunt.

From there it was another visit to the ice cream parlour.  This has got to stop!!  Once we turn out sign round to “just a way of life” it will stop – honestly!! 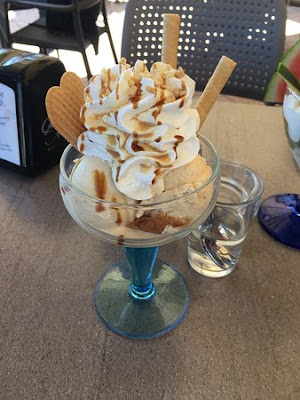 Posted by Linda Gifford-Hull at 11:16