Yesterday’s rain had gone when we woke up and as we had agreed on an early start we were ready to go by 9am.


We pulled out first thinking that Ferndale and Isobel would be behind us and went through Crick Tunnel and were soon at Watford top lock.  There was one boat in the queue in front of us and I went to book our three boats in.  The chap from the boat in front us (I will call him Mr. “AH” and leave it to your imagination as to what I really called him) was wandering around with a bright yellow jacket on with British Waterways written on it.  Not realising who he was I asked him if I could book the boats in and he laughed and said that he was always being taken for a C&RT employee but in fact he was retired so off I went in search of a “real” person.  I found the volunteer with the “book” and booked in but was told that we would be the last boats down as they were closing the locks for maintenance for about 3 hours.  Mr “AH” was put out that I had beaten him to the “book” man and kicked off a bit and was quite rude about him behind his back.  I didn’t bite back but I certainly felt like it.  When I got back to Mary H there was no sign of Ferndale or Isobel.  I tried to ring Diane but I kept getting the engaged signal so sent her a text saying that if they didn’t hurry up they would miss the locks.  The lock keepers kept telling me that they couldn’t wait and if the other boats weren’t behind us when we went down they would have to wait.  Isobel arrived first and finally so did Ferndale.  I was pretty stressed out by this time and it was a real relief to hear an Aussie voice shouting that they were there.  Apparently a hire boat had pulled out in front of them and gone along on tick-over and then Ray and Diane met some Kiwis so had stopped for a chin wag. 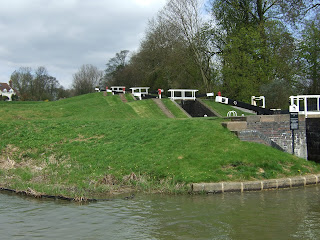 The locks themselves were pretty uneventful though Mr “AH” appeared to be giving his crew tuition and was quite slow.  There were three lock keepers helping us all down which is always nice.


At the bottom Diane counted 11 boats waiting to go up the flight but they were going to have to wait for quite a long time.


We soon caught Mr “AH” up and followed him all the way to Weltonfield on tick-over where he pulled in thank goodness.  We continued on almost to Braunston Tunnel before pulling in to regroup and have lunch!

It was then down the Braunston flight – it seems a long time since we last did it but we fair sped down (!) as there were boats coming up too.  We stopped at the bottom for diesel and said goodbye to Diane and Ray until tomorrow.  They are staying in Braunston tonight to meet up with an old friend.  We also said a final goodbye to Mike (but who knows!) until we see him again in Barby.


We decided to move away from Braunston and out into the country and found a lovely mooring spot by bridge 100.