What a fantastic day – it was really hot in the sunshine.

We were late getting up – I wonder why?  We had moored just a short way before a winding hole so turned round and headed south again.  At our first lock, Pigeons Lock, there was a queue of four boats but as there were none coming up we did get through quite quickly. 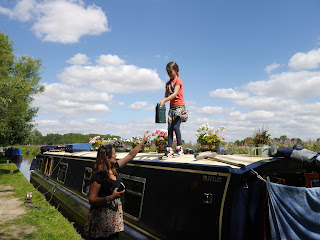 The river Cherwell is very low at present but it wasn’t low enough to ground thank goodness.  It was a pleasant flow – we have been down when it’s been just in the amber which was interesting. 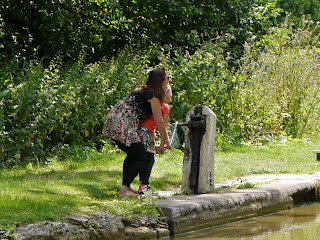 We passed the Satellite Earth Station at Enslow.  The dishes transmit and receive telephone conversations to communications satellites in orbit about the Earth. The satellites relay the signals to similar ground stations around the globe. This installation is the Whitehill Satellite Communications Centre. It is operated by Mercury Communications as part of their telephone network in Britain. It is situated in a disused quarry. 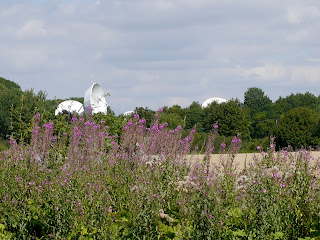 We pulled over just before Shipton Lock for lunch and then continued on our way to Thrupp.  We watered up and Richard went off in search of a mooring place while Fay took me into Kidlington to the Co-op to stock up.  When we got back the mooring place wasn’t in a good place and a long way from the car park and I had stocked up on the heavy stuff!  Fay and Brooke left us after a cup of tea and we continued on to find a nicer mooring place.  We tried to moor in a few places but we couldn’t get into the side.  In the end we went up three locks and managed to moor just above Pigeon Lock.  We have really enjoyed having Fay and Brooke on board.  It’s really nice to have some help with the locks and Brooke even managed to raise a lift bridge with the help of a young passer by – they were thrilled to have done it. 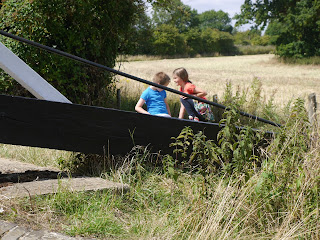 Apparently there used to be a pub at Pigeons Lock called The Three Pigeons which was closed many years ago and is now a private house.

I said yesterday about the disused cement works at Enslow.  Well apparently in the 1920s the Oxford and Shipton Cement Company built a cement works there and began quarrying limestone from the hillside. The quarry was bought by Alpha Cement in 1934 which became part of Associated Portland Cement in 1938, which in turn became Blue Circle Industries in 1978. Towards the end of the 20th century the quarry ceased production and was sold to the Kilbride Group, which applied unsuccessfully to redevelop it as an eco-town.  The quarry is now protected as a Site of Special Scientific Interest because it is important for Jurassic fossils, particularly crocodiles. Since quarrying ceased, the site has also become important for wildlife. Birds including turtle dove, little ringed plover, Cetti's warbler and peregrine falcon breed in the quarry. A lake has formed in the bottom of the quarry, attracting birds including green sandpiper, jack snipe, little grebe and common pochard to overwinter there. The site also attracts invertebrates including damselflies.