A lazy morning as we were in no rush.  We moved the half mile back to the disused wharf where we had been on Thursday.  We had just sorted ourselves out when a boat pulled up beside us – it was FL!  We had sort of been expecting them but weren’t too sure what they were doing.  Ferndale wasn’t far behind so when everyone was moored up we sat out and had coffee.  We decided to move on as the others want to get to Aynho for Sunday lunch tomorrow.
Before the quarry we passed Jane’s Tea Garden for the third time however this time I remembered to take some photos.  This is taken from her website “Janes Tea Garden is the result of the year’s bounty. Everything that can be grown here is grown here. As smallholders we strive for self-sufficiency. We are proud of everything we put in front of you. Odd shaped, colourful, delicious, totally organic, rare breed, produce with absolutely no mileage. What can be better than that? Fruits and vegetables straight from the garden you sit in! Even the flowers on the table come straight from Jane's cutting garden.”  Sadly she only opens on the first and third weekends in the month and this weekend is the second. 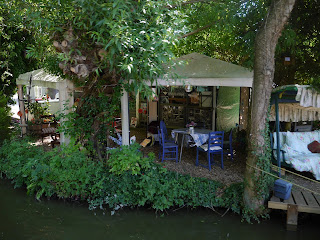 Before we left the quarry the men walked up to see it.  It is now an SSI as the Jurassic rocks provide lots of evidence to tell what the environment would have been like at the time these rocks formed. It is thought that Kirtlington lay near to the shore of a small barrier island, in a coastal environment, and would have been similar to the Florida Everglades today. These conditions attracted many animals to Kirtlington, and the quarry is famous among geologists for its rich diversity of fossils. Kirtlington, is most important for its mammal fossils, and the quarry is the richest mammal-bearing locality of Middle Jurassic age known anywhere in the world. 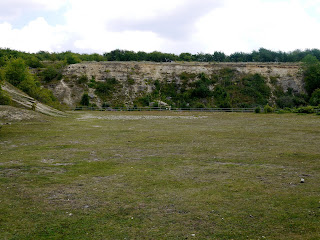 It was a hot trip with two locks before Lower Heyford and then a long stretch on tick-over past moored boats.  We did two more locks and I was beginning to wonder if we were ever going to stop!  Ray was looking for a good internet signal as he needed to do some work and Diane wanted TV signal!  As we rounded a bend just before Somerton we found the others moored up and waiting.

We were soon sitting out having a beverage of our choice – mine was a coke before anyone says I bet hers was a white wine.  However I did have a wine or two later.  Sue was cooking a lamb tagine and there were wonderful smells emanating from FL.  What made it even better was that she had cooked more than they needed so we all had lamb tagine – it was really lovely.  Thanks Sue.  We sat out until quite late tucked up in our fleeces.