I had a really bad session of cramp during the night.  It was in my thigh and I thought it would never go.  I put a bag of frozen sweetcorn on it (dropping sweetcorn everywhere) but that didn’t help.  I must have woken Richard up as he came and dug out some tonic water, half a glass of that and the cramp just disappeared.  My mother used to get cramp and always had a small can of tonic water by her bedside, I used to scoff and say that it couldn’t work that quickly – well Mummy, wherever you are, you were right :-)

Sue and Andy joined us this morning and Muffin was thrilled – he had his pack together again!  We sat out and had coffee but the pack was about to be split up again as before long Richard’s step daughter, Fay, along with her daughter Brooke arrived.  They are staying with us for 24 hours. 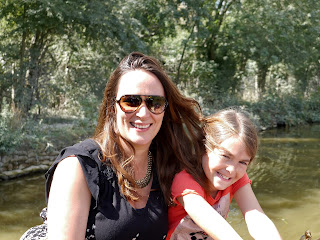 At lunchtime I nervously watched as Fay cut into the loaf I baked yesterday and was so pleased to see that it was cooked all the way through and tasted good!

We untied and I walked up to operate the lift bridge and ended up by letting not only Mary H through but two others as well.  I had a chat to Maffi as I stood by the bridge and he suggested that I look up the Autobiography of a Ballpoint Pen which he wrote, in fact I have read it before but thought I would put the link here as it really is very amusing.  He said it all started when someone borrowed a pen from him and forgot to give it back. 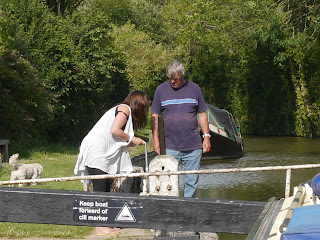 We had a lovely cruise in the warm sunshine and I was even lucky enough to get a photo of a bird of prey.  We didn’t think it was a red kite but looking at the bird book I think it is. 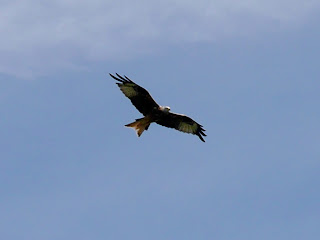 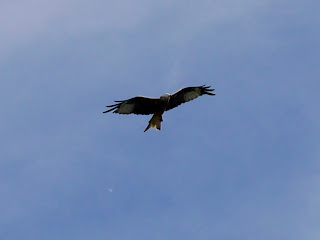 As we approached Bakers Lock we noticed that everything was rather white including a boat tied up below the lock.  The book says there is a derelict cement works there but I wonder how derelict. 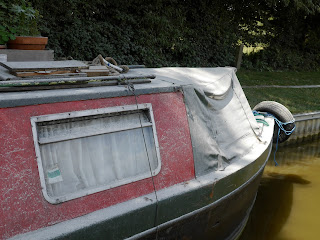 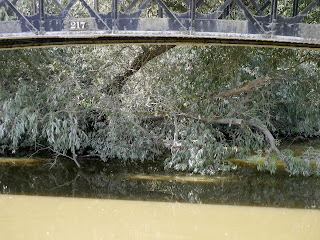 We moored up near to Kirtlington where there is a disused wharf.  It was ideal as we got all the chairs out and made a nice camp!  The only trouble was that the wine came out and I forgot to take any photos.  Fay took this one.  We sat out until gone 10pm though the fleeces did come out but it was a lovely evening. 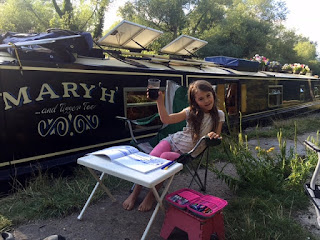 I had done a quick research into Thrupp and found that before the Norman conquest of England in 1066 Stigand, Archbishop of Canterbury held the manor of Thrupp. In 1070 Stigand was deposed and William the Conqueror confiscated his lands. William granted Thrupp to Roger d'Ivry, who sold it to Wadard, a knight in William's court. In 1086 Thrupp was such a small settlement that the Domesday Book did not record it as having any tenants.  In 1788 the Oxford Canal was extended southwards from Northbrook Lock just north of Tackley towards Kidlington and Oxford.  The canal company bought the manorial watermill, demolished most of it, and built a row of cottages beside the canal in its place. They used to be called Salt Row, and one historian suggests that they served as salt warehouses.