I couldn’t sleep last night.  I get these nights every now and again and was still up playing on the computer as 2.30am.  Thank goodness this doesn’t happen often.

We were ready to pull pins at 9.30am and set off to Grants Lock where we found a queue – so what’s new :-(  Up through the lock and along the very shallow canal.  At the bridge holes for the old lift bridges it was extremely shallow even for us who only draw 18 inches.

We noticed how the canal has changed since we came along here last in 2011 – there are more moorings places and it certainly looks nicer now.

It wasn’t long before we could smell the coffee coming from the Kraft factory.  Looking at Wikepedia I found a few interesting bits of trivia.  During October 2006, a block of Kraft Foods that was being prepared for demolition caught on fire and remained on fire for most of the day.  There was a non-lethal fire at the coffee plant on Tuesday 7 December 2010.  In Spring 2010, a truckload of Kenco Coffee was stolen by a driver who conned his way into the plant.

There was another queue (of the same boats that were at Grants Lock) at Banbury Lock.  We filled up with water and were back in the queue before the hire boat behind us came into view.  I love the little lock in Banbury and there are so often masses of people around who want to help however today it was just boaters and gongoozlers.  The basin above the lock had four boats in it one being right where I wanted to swing but being the professional helmsman that I am I did it perfectly!!!!! 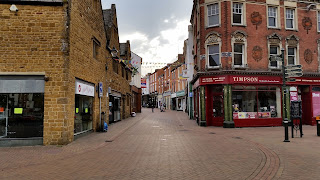 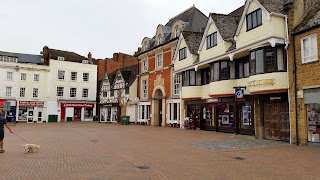 There were quite a few spaces by Castle Quay shopping centre so we pulled in and moored up.  I went for a solo shopping trip into town however I mainly bought Richard clothes with the odd thing for me!  I also did a food shop in M & S – luxury :-)  Richard then went off for his solo shop and came back with TV aerial plugs!  Still we both found our shopping trips exciting :-)

While I was shopping I saw some people eating fish and chips and got the craving for some so we walked back into town, found the fish and chip shop and then took them back to the boat for dinner.  They were lovely. 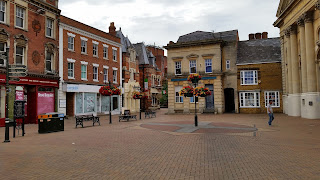 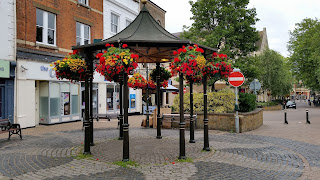 Banbury is a riot of colour with lovely red and yellow flowers everywhere – either in troughs or hanging baskets.  The bridge over the canal is particularly lovely but I forgot to take a photo – I will remedy that on our way back.