Muffin fell in today!  I was wondering when it would happen this year.  He decided to jump ashore at a lock but he was still tied on!  I grabbed the rope and managed to pull him up before he got jammed between the boat and the Armco.  I reckon he wanted to get ashore to look for Ray who had been at the previous lock!  Muffin then had to have a shower to get the mud off his side.

Ray and Diane looked at the weather forecast this morning and decided that they would probably not be able to move for a couple of days after today as there are rain and thunderstorms on their way so they were going to see how far they could get.  We agreed and we both set off more or less at the same time.
As you leave Banbury there is a house with a large photo on the wall with “Dink and Malc” written underneath.  I think almost every blogger who passes this writes about it. 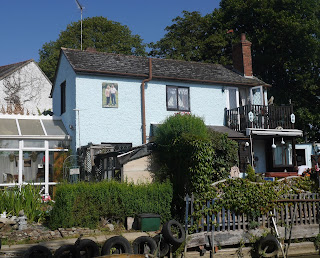 At each lock there was a queue of the same boats – Ferndale and one other with Mary H at the back – AGAIN!  One of these days we will get to a lock first!!!

No soon had we gone through Slat Mill Lock than we started to encounter masses of boats moored for the Fairport’s Cropredy Convention.  This festival began as small private performances to locals by the electric folk band Fairport Convention to about 750 people in a village back garden in July 1976. The next year the performance was repeated and fans allowed to attend. In 1978 it was properly organized and moved to a larger site behind the Cropredy village school. It became a significant event in the band’s history as they played their farewell performance there on 4th August 1979 to around 4,500 fans, who were cheered by a promise to continue with annual reunions. From this point the Festival became the main mechanism for preserving the identity of the band and for their many fans to show their appreciation.  We were worried that many boats would be breasted up which could cause problems getting through but, other than having to go so slowly for so far, it wasn’t too bad.  Some of the boats have gone to town on decorations which all adds to the festival feeling. 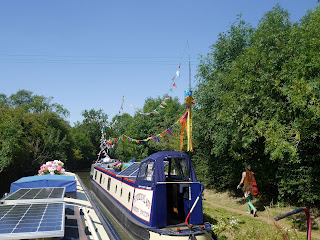 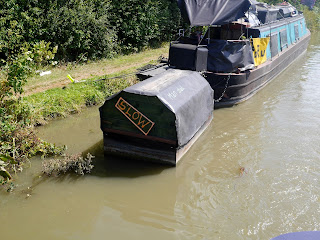 At Elkington’s Lock we came across an ice cream boat – however we resisted the temptation!  After Cropredy there were three more locks before the Claydon flight.  We chose to stop at the bottom while Ferndale went on to investigate more of the Oxfordshire countryside. 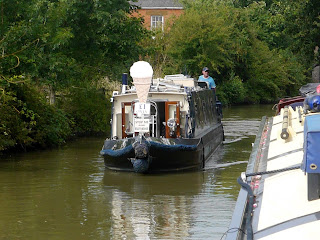 It’s been hot today so it was nice to sit out under the trees on the towpath and relax while “Itchy Feet” did some painting and some polishing. 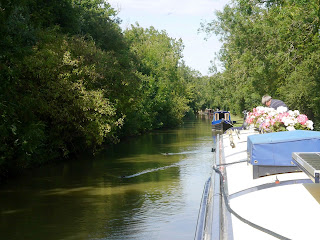