Hey – we got to Claydon Bottom Lock first this morning and we had another boat behind us :-)  We even got up the flight in an hour.  Three of the locks were against us and two had boats coming down but we got a good rhythm going and it was easy.  I had forgotten how much I enjoy doing narrow locks.  We seem to have been either on the Thames or wide canals for so long now.  We now have about 11 miles of lock free cruising.
There was a bird scarer blasting off at random intervals while we were moored last night and Muffin is terrified of bangs or loud noises.  He seemed to spend most of the time under the table.  This morning he and I were at the second lock when it went off again – he didn’t know where to go and rushed off towards the boat which was in the middle of the canal.  I was terrified that he might try and leap aboard – all six feet or so but fortunately he thought better of it.  You wouldn’t believe that his mother is a gun dog!

We passed bridge 142 – a little bridge that leads to a brick wall.  All that I can find is that it spans a feeder from Boddington or Wormleighton reservoirs. 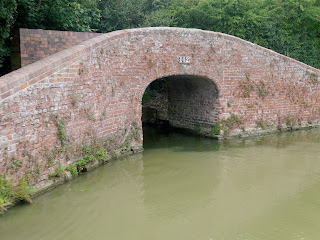 We cruised past a line of moorings all of which had a nice big garden.  It would appear that the thing to have in your garden is a shepherds hut! 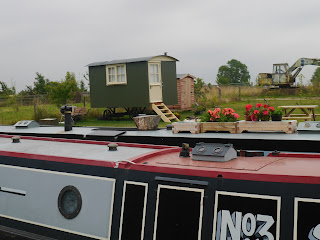 We came through a long cutting which, until it was opened out in the 19th century, was a tunnel. This section is still referred to as 'tunnel straight' or the Fenny Compton Tunnel.  The tunnel opened in 1776 and was 9 feet wide, 12 feet high and ran for about half a mile. It wasn't very deep underground and had a number of wider sections to allow boats to pass each other. It also had rings mounted in the walls to help boatmen haul their craft through.  The Oxford Company bought the land over the tunnel in 1838 with the idea of opening it up. The first stage of this work started in 1838 and by 1840, they had removed several parts of the tunnel roof - a section at each end and a short section in the centre, creating two separate tunnels, one 335 yards long and the other 450 yards long.  In 1865, the decision was made to open out the rest of the tunnel. The southern end was open by 1868 and the northern by 1870. During the opening out works several bridges were constructed, including the cast iron roving bridge that carries the towpath across the canal, a bridge carrying the A423 Southam to Banbury road  and a rectangular wrought iron trough (now demolished) carrying a stream that fed Wormleighton Reservoir. 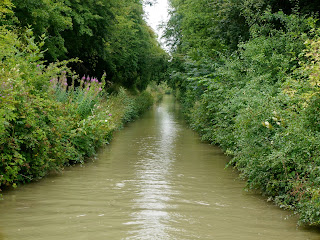 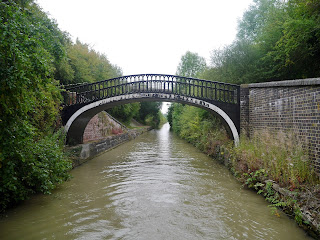 Diane and I had been in contact through the morning and they had gone on to Fenny Compton last night.  We couldn’t decide whether to stop there or go on another 3 miles to a nice spot where we have moored before.  However just before getting to Fenny Compton it started to rain so we pulled in just behind Ferndale in a spot that Diane had been guarding for us!!  Today is Ray and Diane’s 32nd wedding anniversary and to celebrate Diane has been spring cleaning Ferndale!!  Well that’s not entirely true as she started in Thrupp with the cratch and wants to do the whole boat before going away.

We had a quiet afternoon before joining Ray and Diane for a celebratory drink in The Wharf.  I’ve “borrowed” their selfie that they took whilst having dinner cos it’s a nice one :-)
3.90 miles
5 locks
Posted by Linda Gifford-Hull at 09:52