So here we are on the Grand Union Canal – we didn’t mean to be but we are!

I got an email this morning from Brian on Harnser to say that my photo on Saturday was of Marston Doles Top Lock and not Napton.  I would have agreed with him however our Geo map calls it the Napton Top Lock!  I can’t remember what it says on the board but I will check when we go back.  If I remember rightly Brian used to moor in the Engine Arm just below the top two locks so should know - I have changed the blog accordingly!! 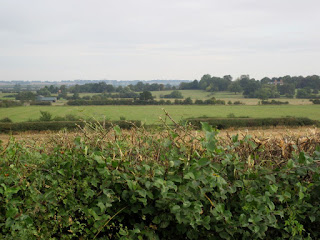 We had a nice cruise to Braunston except we got stuck behind a boat towing a butty at a snail’s pace so Richard pulled over to let him get ahead.  There were plenty of moorings in Braunston but we ended up mooring outside the marina.  The plan was to get some shopping and go to Midland Chandlers and then go back out to the countryside but, as in the best laid plans of mice and men, we decided to stay put for the night.  We then discovered that Ferndale was on her way to Braunston so we planned to meet up with Ray and Diane for early doors.

Richard and I went up the hill into the village for our shopping and just had to make a visit to the butchers where I got some lovely BBQ meat – I’m already looking forward to that. 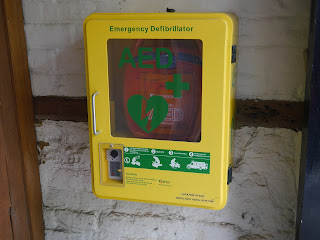 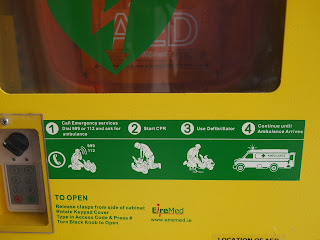 One of the things that I have noticed in the villages we have visited this summer is that many of them have emergency defibrillators.  I wasn’t sure if I would know how to use one if the need ever arose but I found the following on the internet which I think everyone should know.  Defibrillators are simple and safe. The machine gives clear spoken instructions. You don't need training to use one.  Once in position, the defibrillator detects the heart's rhythm. It won't deliver a shock unless one is needed.  Every second counts.  After a cardiac arrest, every minute without CPR and defibrillation reduces someone's chance of survival by 10 per cent.  When you call 999, the operator can tell you if there's a public access defibrillator.  Defibrillators are very easy to use. Although they don’t all look the same, they all function in broadly the same way.  If you come across someone who is not breathing or breathing erratically, the most important thing is to call 999 and start CPR. If you're on your own, don't interrupt the CPR to go and get a defibrillator. When you can, send someone else to find one. Once the defibrillator is open, all you have to do is follow the spoken instructions.

I was sitting minding my own business when I heard a cooee – I looked up and there was Fiona Slee drifting past the window!  Of course she was on Epiphany and John was on the back but that’s what it looked like as I couldn’t see the boat! Sadly there are on their way to Cropredy and hadn’t got time to stop.  Shame – hopefully next year.
We had a very pleasant early evening with Ray and Diane at the Boathouse until they left us to meet other friends and Richard and I had a two-for-one meal.