We woke up this morning at our usual time of around 7.30am and decided that we would offer to help Ray and Diane up the Braunston flight of six locks.  A quick Viber message and our offer was accepted.  They picked us up about 9.15am and we headed off to the locks where we met a hire boat about to go up so we buddied up with them.  They had two shore crew and we were three so plenty of brawn – in fact in the end Diane and I went on ahead to help the two boats in front as the two women lockwheelers were struggling a bit.  We got up the flight in about 1½ hours and said a final farewell to Ray and Diane – the third I think! 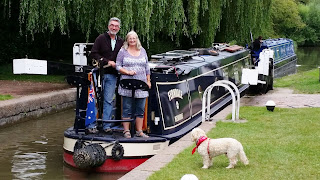 It took us 14 minutes to walk back down the flight and we rewarded ourselves brunch at the Gongoozlers Rest Café boat – a bacon and egg roll with a cup of coffee.  The food, when it arrived, was lovely but I reckon we had to wait at least 30 minutes for it. 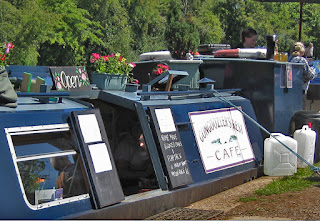 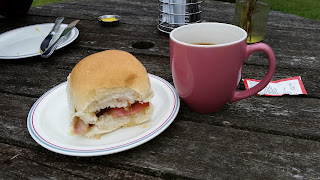 We are moored by Bridge 1.  Now bearing in mind the Grand Union Canal goes from London to Birmingham how can Braunston have Bridge 1?  Well originally the canal from Braunston to London was the Grand Junction Canal.  The Warwick and Napton, Warwick and Birmingham, Birmingham and Warwick Junction and the Grand Junction Canals were all bought by the Regent's Canal in 1927 and became known as the Grand Union.  The five mile section of the Oxford Canal between Braunston and Napton still forms the main line of the Grand Union.  Although the Grand Union intended to buy the Oxford and Coventry Canals, this didn’t happen.  Just next to the Gongoozlers Rest Café there is an old toll house which was built in 1796 and is now known as the Stop House. The “look-out” man collected tolls here.  There was originally a single lock, which was widened to the standard double lock and later removed.  It is said that a rope with a bell was put across the canal so that any boat arriving would ring the bell and alert the lookout. 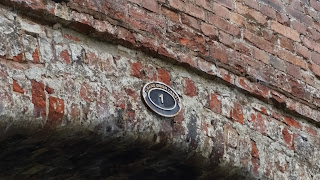 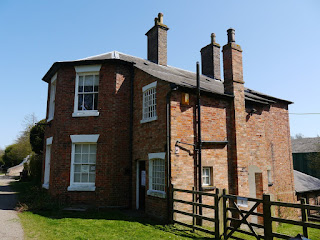 In the 1780s the part of the village where Braunston Marina is now became a hive of activity when the Oxford Canal passed under the turnpike bringing a busy wharf to this important canal/road crossing. There were also canal employees’ houses and a real concentration of pubs and alehouses.  In 1828 it was decided that a quicker waterway passage was needed through the Leam Valley to Napton so the Oxford Canal was re-routed, resulting in a dead-end at the Wharf where an Oxford Canal Company Warehouse was built, together with a dry-dock and wet dock. The Grand Junction Canal Company had a smithy here and it was generally a hive of boat building and operating activities.


In the evening we went back to The Boathouse to meet Mimi and Richard from Magic.  We have known them for a few years now and it was really nice to have a catch up with them.
Posted by Linda Gifford-Hull at 10:10